Ever since KTM Duke 125cc was launched in Europe every bike enthusiast just waiting to see KTM Duke 125cc launch in India. Most of them were disappointed when Duke 125cc was launched in Europe with the configuration of 15 bhp power, top speed of 80 KM (due to European norms for under 18) and the price tag of nearly Rs. 2.8 lakhs. But the real surprised came when Bajaj Auto announced that India will get a bigger Duke at an attractive price. 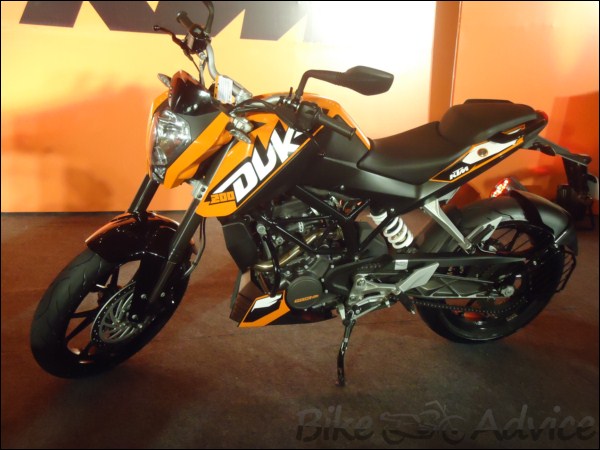 Indian bike enthusiasts were eagerly waiting for Duke 200 India launch after it was launched in Malaysia and Europe. Finally the wait is over now. Bajaj Auto has launched Duke 200 on 24th January in Delhi and the booking will start from February 1st week across the country. But why one should buy Duke 200 when there is Pulsar 220, Karizma, YZF-R15 V2.0, Honda CBR250R and upcoming Honda CBR150R, next generation Pulsar and Hyosung GT250R? Let’s have a look. 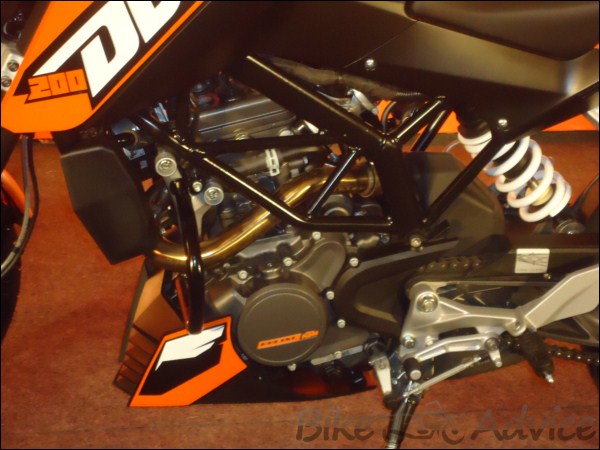 The engine generates maximum power of 18.4 KW/ 25 bhp @ 10,000 rpm and maximum torque of 19.2 NM @ 8,000 rpm. The power to weight ratio of 184 bhp / tonne is even more impressive than bhp and best in class thanks to its kerb weight of 136 Kg. It has got high tech cylinder head similar to those used by KTM on their top level racing bikes. It comes with Balancer shaft which reduces annoying vibrations. Duke 200 comes with very high compression ratio of 11.5:1 which requires high octane quality of fuel like Speed or Xtra premium. 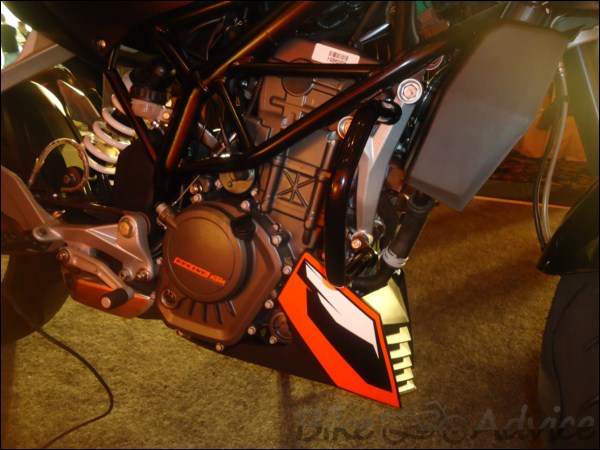 The fuel delivery is managed by world class Bosch electronic fuel injection. The fuel injection mapping starts working as soon as the gear is engaged. The 38mm throttle body ensures instant acceleration, maximum performance and low level of fuel consumption. Thanks to the electronic functionality and gear sensor, the maximum speed is limited in sixth gear to level permitted in the respective country. 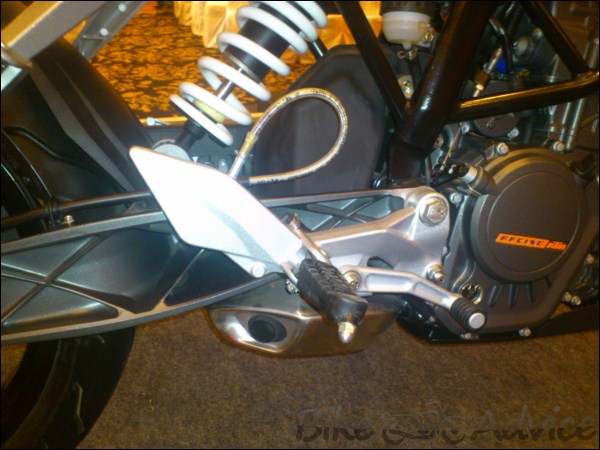 The transmission is handled by six speed gear box and wet multi disc clutch which is mechanically operated. It has got single centrally placed spark plug which ensures optimum ignition.  To control the overheating issues the engine comes with liquid cooling system. It has got centrally located exhaust which is something new in India. The compact three chamber silencer with three way catalytic converter has been placed between rear wheel and the engine due to which it seems that there is absence of exhaust pipe. The central location of exhaust also has an advantage of low centre of gravity. The rotary sound like exhaust note is a unique feature and suggest an arrival of monster.

This is an engine which is meant to be revved hard. The engine produces lower level of emissions and high level of fuel efficiency. Overall it’s supremely engineered and highly refined and reliable engine which is choice of every bike enthusiasts across the world. 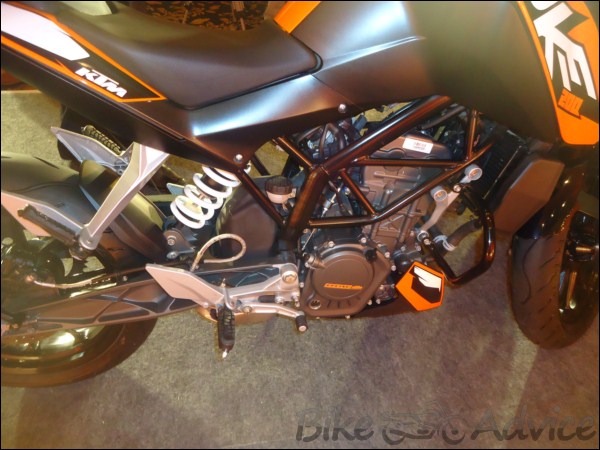 Duke 200 has got the Chromium-Molybdenum trellis frame with steel sub frame. It is important to know what a trellis frame means. According to motorcycle racing research major advantages are to be gained in terms of rigidity by joint the steering head to the swing arm in as short a distance possible. A steering head is at top of the frame. The frame is made up of large number of short steel (or aluminum) tube welded together to form a trellis. It is easy to manufacture and extremely strong as well. It has unique aluminum die cast swing arm which is light yet extremely stable. It has got wheelbase of 1367mm which is widest enough to do better cornering. The bike weighs only 136 Kg despite having 200cc engine, widest tyre, USD suspension, liquid cooler. The light weight is result of KTM’s traditional quality of having precise and compact components and excluding unnecessary components. It has 165 mm (6.50 inch) of ground clearance which is enough for most of the bumpy riding. Overall the chassis is light weight, well built and enhances a rider’s confidence. 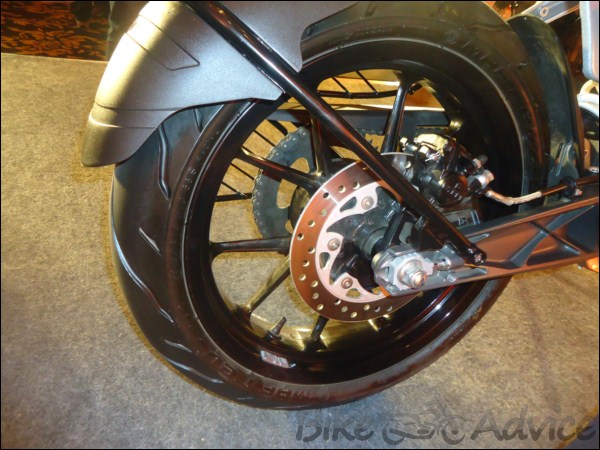 Duke 200 has got one of the widest tyres in its class. It has also got 10 spoke alloy wheel which suits its naked look. The front rim size is of 3” x 17” and the rear rim size of 4” x 17”. The die cast aluminum wheels are specially designed by KTM to make it lightweight yet extremely stable. It has got MRF REVZ FC radial tubeless tyres with the front tyre size of 110/70 * 17 and rear tyre size of 150/60 * 17. It is to be noted that this are radial tyres so it comes with an advantage of shorter barking distance, better road grip, low fuel consumption and better life over a normal tyre. Further the tyre size is large enough for any kind of road conditions. 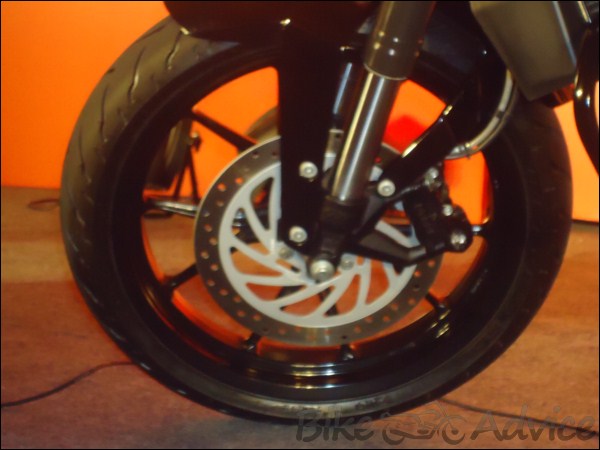 Duke 200 has got one of the finest braking system in its class. It has got disc brakes from Bybre, a subsidiary brembo brakes (world’s leader in disc brakes). The front has got 280 mm disc with single piston floating caliper and the rear got 230 mm four piston radially bolted caliper. The rear disc is one of the widest in its class. 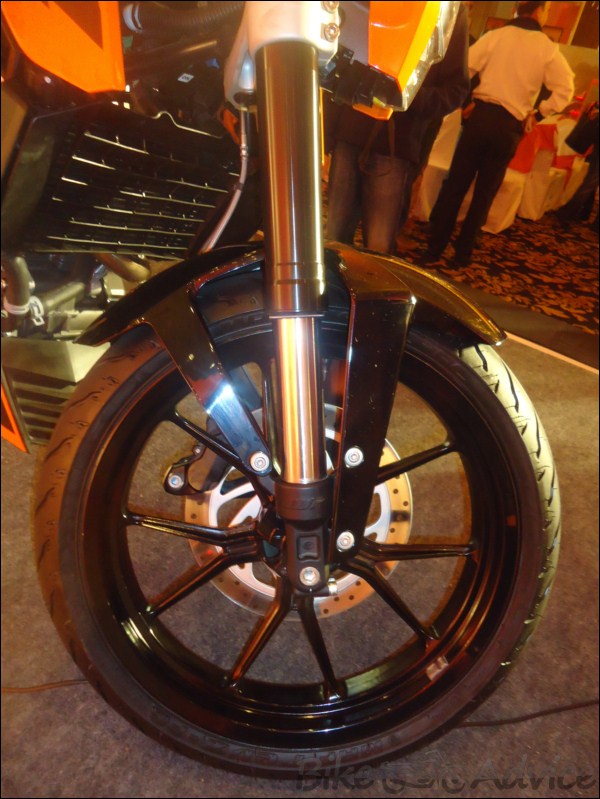 Duke 200 has another novelty in suspension department. It comes with WP Upside down (USD) front suspension which is also better known as Inverted forks. The upside down system has tubes at bottom and bodies at the top which improves handling by reducing the unsprung weight of the motorcycle. The USD suspension is mostly found on Sports motorcycle. What’s more, the upside down suspension has 43 mm internal tubes one of the largest in its class. 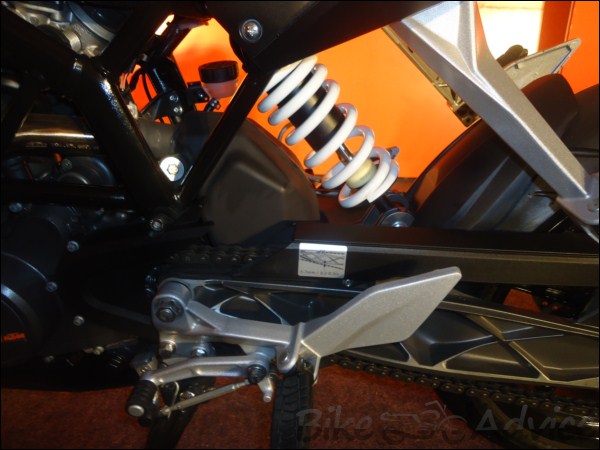 This isn’t enough the rear got WP Monoshock suspension. WP Suspension is one of the leading European companies in suspension and it supplies to some of the reputed name in Europe like BMW and Triumph. 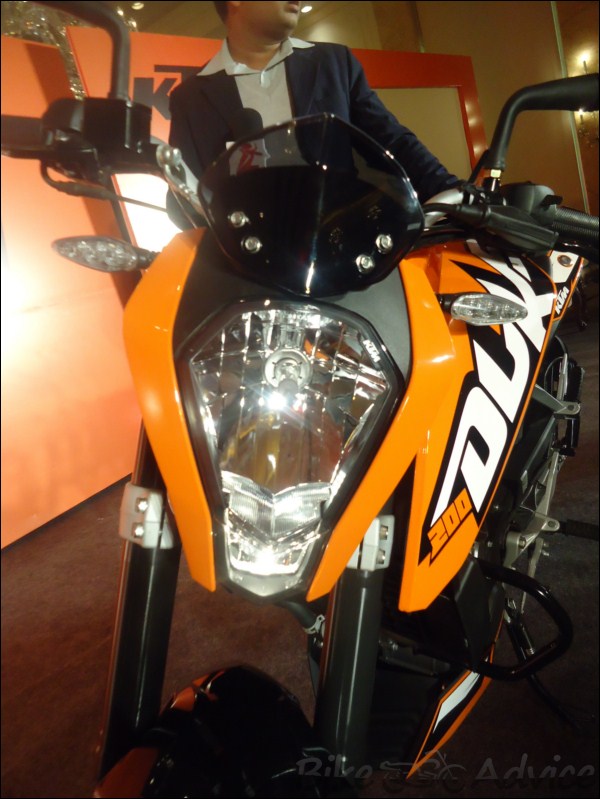 As far styling concern Duke 200 has got naked street fighter looks. The bull inspired front headlight suits its street fighter look. The motorcycle looks massive from the front due to its wider tyre and naked headlight. The diamond inspired LED tail lights are good enough to catch anyone’s eyes. The LED side blinkers looks cool with headlight and taillight. The nicely design saree guard, grab rail and rear hugger enhances its rear look. The bull inspired fuel tank offers enough knee recess and the air craft type fuel tank filler looks gorgeous on Duke fuel tank. Both the side look of Duke 200 leaves an impression of higher displacement bike due to an over square engine and wider tyres. Duke 200 comes with top notch paint quality. It comes with KTM inspired orange color, however we may see other color option in near future. Overall it has top class built quality with pure naked street fighter look. 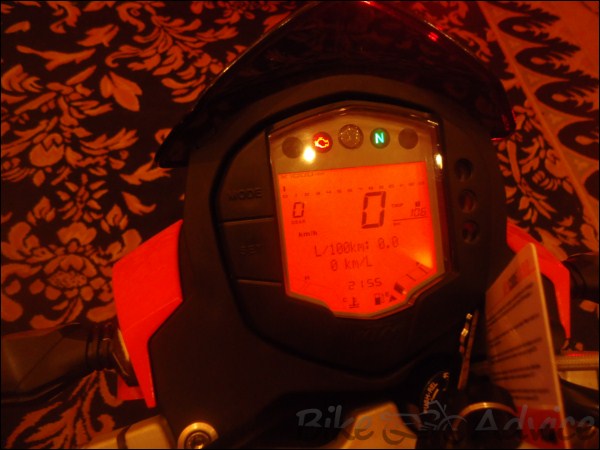 Generally an instrument panel introduction is included in electrical but the Duke 200 has got most sophisticated and functional instrument panel which is best in class and available only on top end bikes and cars. It has got digital instrumental panel where you can have average speed during trip, average fuel consumption, distance to empty, distance to service, dot matrix messages, ready to race message. The list does not end here; it has two trip meters with additional F mode apart from digital speedometer, rpm meter, a digital watch and gear indicator. You can also know the temperature level of engine. You can also set the rpm limit for you motorcycle and it will not go above that.  A shift RPM alarm fro driver helps in shifting the gears. The instrumental panel has indicators for side, neutral, high beam, side stand, low fuel level and low battery.  It has one of the widest digital instrumental panels in its class. 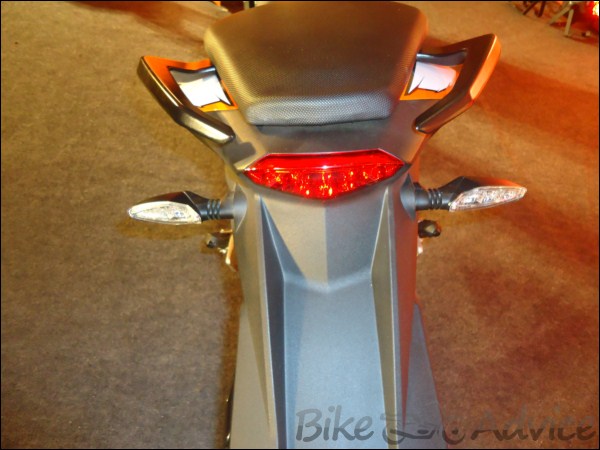 It has headlamp roll ON during rolling downgrade: This means there is a vertical compensation for the angle created on an incline or decline, something like the adaptive headlight in the K1600, but way less advanced than that since the one on the KTM will not compensate for the lean. The front headlight and rear tail light has got 60/55W bulbs. It also got zero maintenance 8AH VRLA battery which ensures you will never out of power supply. The Duke 200 number plate has also got LED illumination. What more you can also modify the tank illumination by aftermarket tank LED. It has got Backlit control switches which includes side indicator, low high beam, headlight turn on/off, turn indicators and engine kill switch. 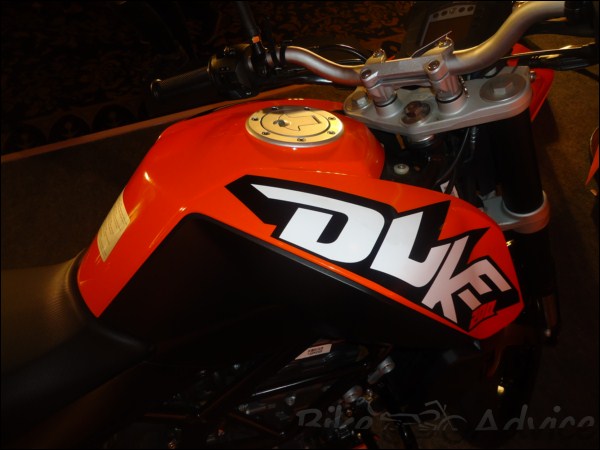 Best in Class Ride and Handling

Duke has best in class ride and handling abilities thanks to its class leading frame, tyres and suspension. The riding position is upright which ensures that you will not get tired in long journeys.  It has the hydroformed handlebars for better strength and clamping location. The handle bars provide an excellent feedback while high speed cornering. The high speed straight line stability of Duke, is a second to none. 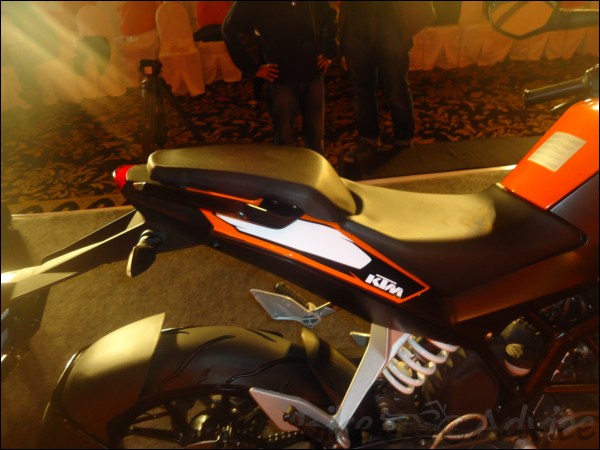 The seat height from ground is just 810mm, perfect for an Indian average height of 5.6 inches. The wide rider seat has enough padding but the rear seat is bit narrow. The fuel tank offers enough knee recess. 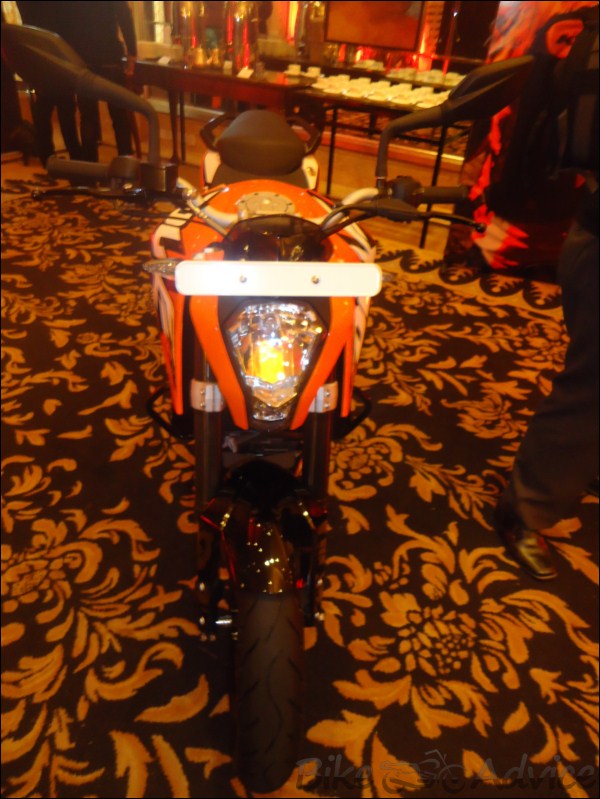 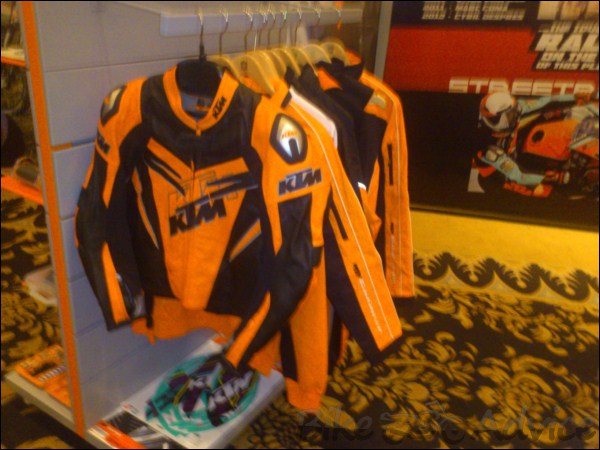 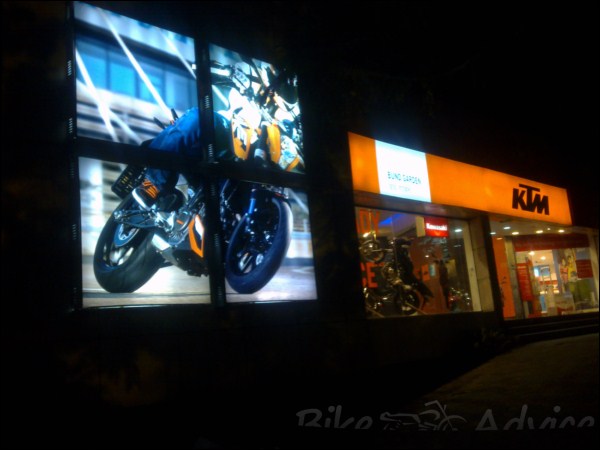 People are always worried about quality and availability of service station in case of sports motorcycle. With Duke 200 you get 34 dedicated showroom and service centers throughout India which is largest for any specific motorcycle (these service stations were before pro biking showrooms of Bajaj).  The competition like CBR250R and R15 does not have any sole dedicated service station which the Duke has. 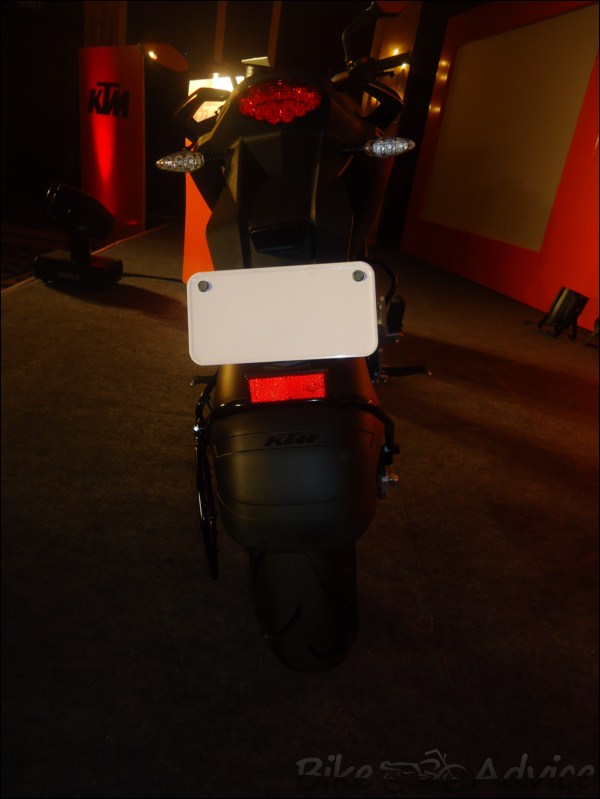 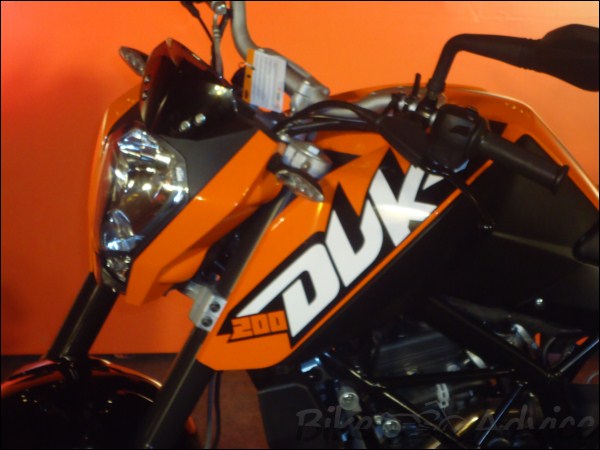 Duke 200 is an outstanding motorcycle, the only thing which it short fall is a top speed. However, considering a street fighter motorcycle it needs to be quickest rather than fastest and Duke over score competition in this department. If you are ok with top speed this is the motorcycle in 250 cc segment you should go for. So guys, ready to race?

Please leave your comment what do you feel about Duke 200?