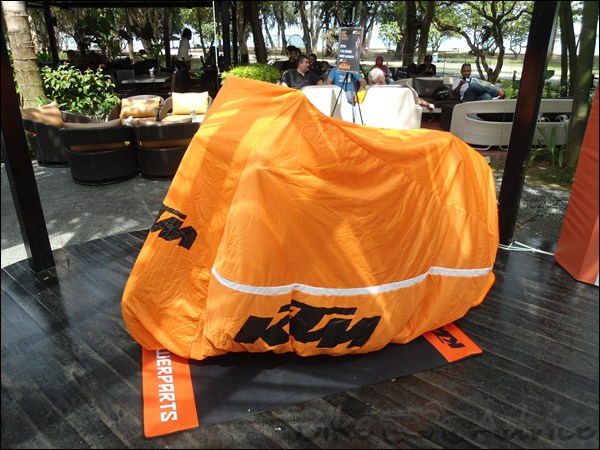 South East Asian nations are among the major markets for KTM bikes. In this write up, I’ll be covering all that happened as the KTM 125 Duke was unveiled here in Singapore. KTM currently sells the Enduro series, SuperMotos, Adventurer series – Duke line-up which includes the Duke 690 and the Duke 990 in Singapore.

For the first time, the Austrian maker has decided to launch the Duke 125 in the South East Asian market and Singapore was chosen as the first destination. As I’d mentioned earlier, I, on behalf of BikeAdvice attended this event as a VIP guest and here is the launch report and an interview.

The actual purpose of this event was to unveil the bike and also to hand over the keys of the new Duke 125s to the first 20 customers who booked one even before the bike was unveiled. The ceremony was presided by Mr. Selvaraj Narayana, Director, Logistic and Sales, South East Asia.

With three decades of achievement under his belt, no individual is better prepared to manage KTM’s Junior Supercross program than Selvaraj Narayana. He has held the position of Vice President of Racing and Event Promotions of KTM North America before he was assigned for KTM operation in India. Selvaraj’s career stretches back to the 1970’s working as a factory technician in the Racing and Development in Germany.

Selvaraj Narayana is the person who made KTM’s name synonymous with Motocross. Sevaraj joined KTM in 1987 and since then he used his knowledge and experience in motocross and supercross much to the benefit of the highly successful KTM Red Bull Supercross Team. He served as the Red Bull KTM Team manager in 2000 where he was instrumental in taking KTM’s pro supercross and motocross efforts to national prominence. As a tribute by his peers, he was presented the Vintage Iron Lifetime Achievement Award in 2000 by 5 time world Champion Motorcross. 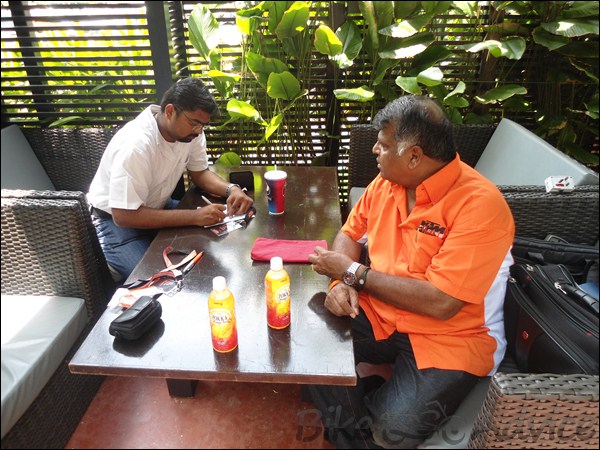 The event was organised and promoted by DirtWheel, who are the dealers and distributors of KTM products in Singapore. We were offered the bike for sometime and here is our quick first look of the small pocket rocket.

The ongoings started with a few videos on Duke 125, most of which focused on stunts. It was followed by unveiling of the bike for the South East Asian market. The honours were done by Selvaraj Narayana together with a top delegate from Dirtwheel. The specs and the features of the bike were discussed for some time. There was a huge excitement among biking aficionados as the bike was revealed for the market out here. 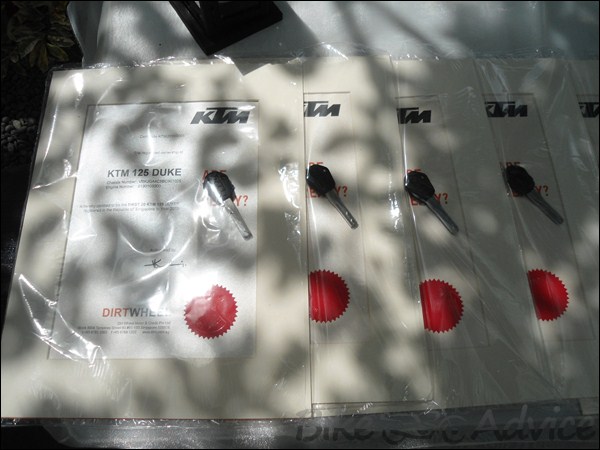 As I’d mentioned above, first 20 customers were handed over the keys. The best part was that a customer named Joeella Joe’s birthday coincided with the launch. KTM had a surprise for him – a cake which he was made to cut with everybody sending best birthday wishes to him.

I also had the opportunity of personally interviewing Mr. Selvaraj Narayana and spending some time with him. Here are the excerpts from the interview.

Naren : In what way do you think is the KTM 125 Duke different from other bikes?
Sel (That’s how he is called) : The KTM 125 Duke is very unique because it is designed exclusively for the young riders.

Naren : Are these bikes from Bajaj’s Chakan plant?
Sel : Yes, these bikes are of course from Bajaj plant in India. But this being the first batch of bikes, they were taken to Austria from India and are brought here from KTM’s Austrian plant.

Naren : How are KTM bikes doing in Asia?
Sel : Asia is indeed a big market for us. The KTM 125 Duke is the first bike with a very unique concept and hence the response is really good.

Naren : On what strategy are KTM bikes designed and made?
Sel : Every single bike from KTM is made with ‘Attitude’. This attitude fits to the passion of young motorcyclists and the grownups as well.

Naren : Which KTM product do you think is the best?
Sel : (Smiles) It varies from country to country and region to region. However the 690 Duke is the most dominant one owing to the overall riders’ concept.

Naren : Singapore witnessed the first launch of the 125 Duke. Next is what?
Sel : We’ve decided to unveil the bike in Malaysia in another few more days and the Prime Minister of Malaysia will unveil this bike to his citizens. Malaysia is yet another important market for us.

Naren : What is the maximum speed of this bike?
Sel : This bike can easily cross 105 kmph mark, but the models that are sent to the European nations will be able to make it up to only 90 kmph because of the restrictions there.

Naren : What do you think makes the KTM 125 Duke so special?
Sel : If you can see the spec list of the bike, you’ll notice that all components are most expensive ones like Bosch Fuel Injection, Aluminium Swingarm, Brembo callipers and such similar stuff. All these together make this bike very special. 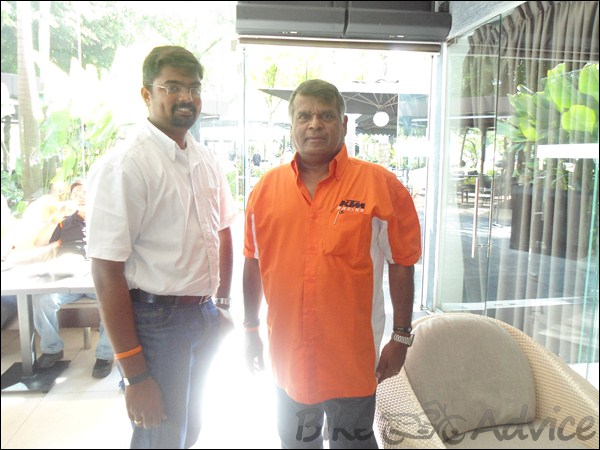 Naren : How do you think will be the market for this bike here (in Singapore)?
Sel : The Singapore market is already overwhelming. More than 98% of the bikes that could be produced for this region are already booked. So, we are very sure we’ll dominate this market.

Naren : Tell us more about this bike?
Sel : We build, design, build, design and build. This is how we work. This bike is built with a passion. When you ride some other motorcycle and then get to ride this, you’ll know what this motorcycle is really capable of. We give our bikes to someone who hasn’t ridden a bike before to develop and make the product what you like to have. This is where passion comes. We don’t wanna sell out bikes. We wanna sell our passion.

After the handing over of keys to the customers, he said to them, “So, respectfully handle the bike with the feel that Bike is the Boss”. This brought in a huge wave of applause from the audience.

After this the riders who are now the owners of the first 20 KTM 125 Dukes were given few special instructions on riding their new bike. They were also taken for a ride in their respective new bikes along the road there with expert supervision.

There were also a few KTM Power parts and Power Wear that were kept on display. This is the accessory business which KTM is into. The bike which was unveiled was fitted with all the extra accessories that the company manufactures for it. 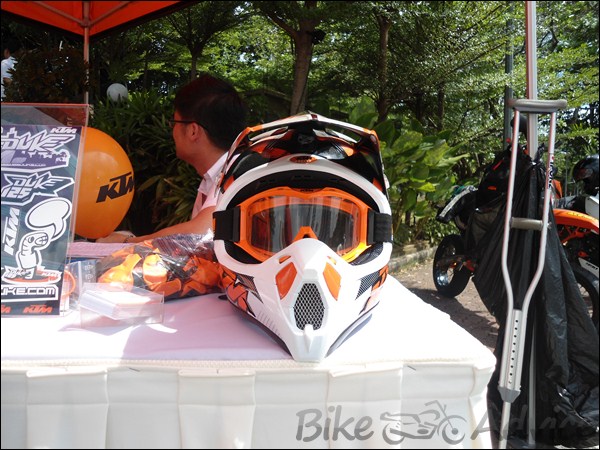 Thus ended the silent ceremony where the KTM 125 Duke was unveiled to the entire South East Asia.

As I was returning back, I was excited seeing The KTM Spirit which is ‘Riding with an Attitude. Every touch of the metal should make your heart beat faster. It is about how the bike moves and how you move the bike’. I could still hear Sel’s words in my ears. It is ‘The KTM 125 Duke offers you a big bike feeling with a light Engine.’