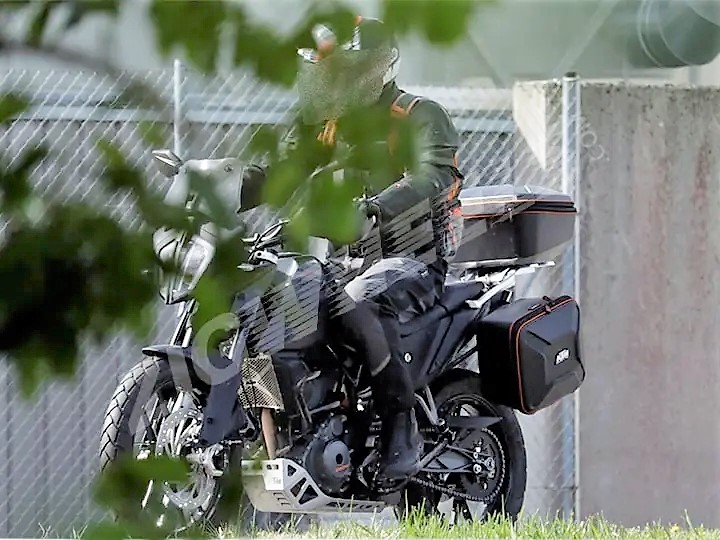 Considering the very first concrete spy pics that surfaced, KTM has been road testing the 390 Adventure since at least one and a half years now. It made its Indian spyshot debut in January this year. In a latest update, Zigwheels has shared some spy pics of of a test mule that has allegedly been spotted in Europe.

Now when compared with the India-spec model there are a few differences that we can notice. First up, there is a metal bash plate. Indian-model has been spotted with what looks like a plastic/fibre engine cowl and it is smaller as well. There is a mesh radiator cover as well which we have not seen on the India-spec model yet. Those tyres are Metzeler Tourance whereas our Indian mules have been shod with Continental TKC tyres.

Moving to accessories, this European model features soft panniers and a small top box. The Indian model was also spied with such accessories but they appeared to be bigger in size and they were hard boxes. Rest of the bits appear to be very similar to what we have seen on the Indian model.

390 Adventure, so far, appears to be more of a road-spec model with alloy wheels and a combination of what looks like 19 and 17 inch tyres for the front and rear respectively. Power will continue to come from the very potent 373 cc single cylinder engine of the Duke 390 but its application will need a fair bit to retuning to justify its work as an adventure tourer where it will need strong power and torque lower down the range.

Indian launch, as we see it, should happen sometime this year. Whether it will be before, after or at the same time as its international availability remains to be seen. We expect it to be priced at around the 2.7-2.75 Lakh levels in the local market.