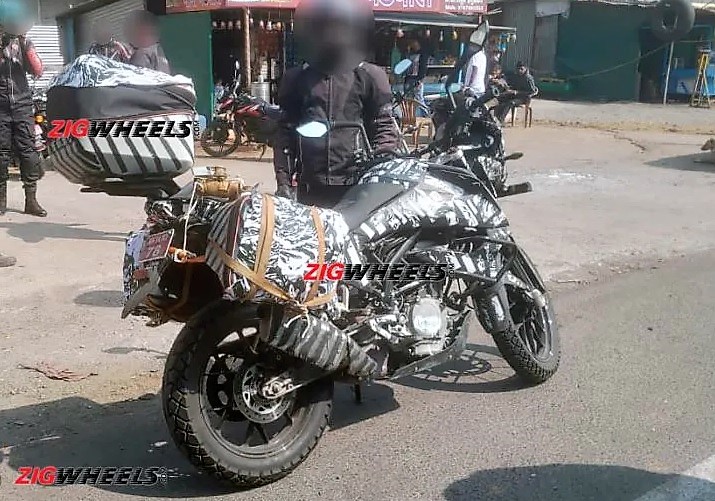 This is the closest we have come to KTM 390 Adventure’s presence. After various spy pics from Europe, somebody finally snapped
the much awaited motorcycle testing in Pune, India few weeks back! And in a latest, Zigwheels has shared a new set of pics but this time it is kitted…

They say that the test mule was shod with Continental TKC 70 dual purpose tyres which is what may finally go to the production models. Those saddlebags and top box suggests that most of the vital technical specs have probably been frozen and only the final tinkerings, related to suspension etc are probably under tests. This also, kind of confirms, that KTM will go aggressive by offering various adventure accessories for the motorcycle. The sore point here is the presence of alloy wheels!

Upfront is a Duke-390 like headlamp, longer, more accommodating seat, followed by a leaner body which appears to be slightly larger than the naked motorcycle (and is resting on an extended frame). It also sports a mini fairing which holds that larger windshield. And then we also notice the broader exhaust canister.

Adventure traits include suspension with higher travel, a combination of 19 inch front and 17 inch rear wheels (most probably), dual purpose tyres and we expect to see spoke wheels at least as an option. The longer sliding seat will also help in weight transfers during off-road applications.

A digital rendering by Indianautosblog suggests how the final production version could look like. It incorporates changes such as the new sub-frame, longer suspension travel and a bigger front tyre.

It is obvious that the motorcycle will carry the same 373cc single cylinder engine of the Duke but its application is likely to be altered to suit adventure like riding conditions.

For some reason KTM chose not to showcase the motorcycle at EICMA this year which created suspicion over their promise of a 2019 launch in India (and the world!). But now that KTM has started testing it on our roads, we are definitely on track for a launch somewhere during the middle or second half of 2019. A recent report claimed that KTM will formally announce the launch date/timeframe of 390 Adventure’s launch by March 2019 (details)!

As we said, this is the closest we have ever gotten to the KTM’s baby adventure which has been rumoured ever since the Duke 390 was introduced in India. The wait has been real long, but let us hope it lives up to all the excitement!