As the official launch of the much anticipated KTM Duke 390 is around the corner, some fresh news about the entire bike itself has emerged now. Here’s the latest information about the KTM Duke 390 from Austria. Apart from the Orange alloy wheels that distinguish this bigger monster from its younger sibling there are no big visual differences that can instantly raise an eyebrow. 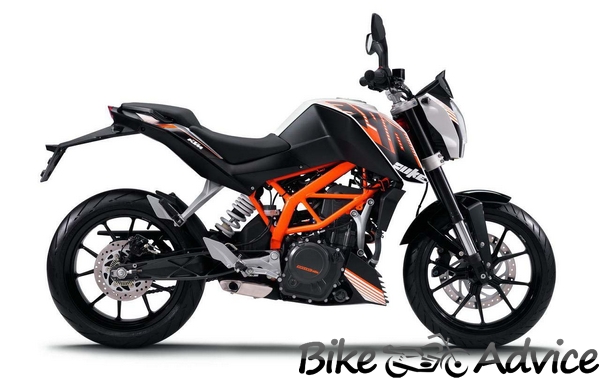 But that’s where the similarities end. The KTM Duke 390 pumps out a healthy 44PS that weighs only 139 kilos compared to the 25Bhp output in the Duke 200.

Bajaj has retained the trellis frame of the Duke 200 for the 390 which will be painted in orange to showcase the company’s trademark color. The source of information also says that there is a possibility of 10 spoke orange alloys that can come with the Duke 390 when launched in India. Additionally it is also said that the Indian spec KTM Duke 390 will definitely have ABS that is “Switchable” meaning it can be Turned On and Off when needed and a more practical bigger Fuel Tank.

Following are the New Revelations about the Duke 390;

New gearbox: The KTM Duke 390 has an all new revised 6 Speed gearbox with different gear ratios complementing the 44PS of raw jaw dropping power it delivers.

Metzeler Tyres: As seen in the earlier spy pictures, the Duke 390 will be shod with Metzeler tyres as seen in the Euro Spec bikes which is a good move, considering the Duke 200 which was released in India came with MRF’s. Be informed that the export Duke 200’s still had Metzeler’s on them. It is also said that the Metzeler’s would be readily available in KTM outlets after the official launch considering if one wears out fast.

Crankcase Castings: The Duke 200 and Duke 390 will share similar bottom end where as the top-end of the Duke 390 is a complete newly designed unit.

Forged Piston & Coated Cylinder: The KTM Duke 390 will come with a forged piston and a chrome plated cylinder. What exactly is not known is if its chrome plated or Molybdenum coated cylinder. Nevertheless, it will have minimal wear and tear with high efficiency.

Switchable ABS: Duke 390 will be offered with ABS as standard manufactured by Bosch that has a defeat switch that can be turned On and Off when needed.

Top Speed: Duke 390 is claimed to offer a true top speed of 160 Kmph which is considered to be a lovely figure on the speed Gun but again wind resistance on a naked bike at 160 Kmph is something to watch out.

Here’s a small comparo chart below showcasing the differences in the available performance bikes in India – Duke 200, Duke 390, Ninja 300 and CBR 250R. You can click open to view it clearly.