As we bikers are really excited about the news of the all new KTM Duke 390 being launched in India in a few months from now, there was no concrete information about what to expect in the upcoming bigger bike and what not until now. Thanks to Mr. Yogesh Naik and the Team Duke who have captured some shots of the upcoming KTM Duke 390 being tested in the Mumbai Pune highway. 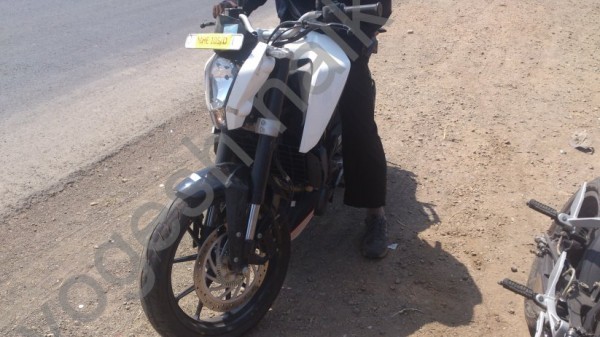 The Test vehicle which was painted in White whispers subtleness by the looks of it, which can never be misunderstood for a bigger Duke inviting unwanted attention from the bikers and other manufacturers. A strategy commonly used by Manufacturers not to reveal anything more or less about their product until it is officially launched and the specs are revealed.

The interesting story that unwinds after the pictures of the bike that speaks out for itself are the Wheel speed sensors seen in both the front and the rear wheels confirming that the bike which will see the launch phase soon in India will be ABS equipped. Another interesting pointer that the picture of the speedometer talks about is the average mileage figure that displays as 38 Kmpl. Although the figures are a bit optimistic for a 390cc high revving motor, there are two ways that this figure can be accomplished. One being the bike idling for a long time, the ECU might have calculated mileage based on the idling. Secondly, if the bike has been ridden sanely on the highway that actually doesn’t require much gearshift’s and braking; with which this kind mileage figure is highly possible. Moreover, the test vehicle caught would have also been doing the mileage test for which the bike would have been ridden on the highway on a very average speed to attain the highest mileage figure.

If at all the true mileage figure is the same as seen in the pictures, making all the speculations about the indicating mileage figure false, I’m sure it’s a phenomenal value of efficiency that a 44Bhp motor puts out. However, the actual figure can be revealed only after the launch

Coming to the rubbers, the test bike was seen with the world renowned Metzeler tyres. However there is no assurance that the actual production vehicle could come with Mezeler’s. On a safer side it can be assumed that the Duke 390 would get at least the MRF radials that the smaller Duke 200 got in India.

With all the expectations and a bit of speculation floating around; the Austrian performer is expected to be launched in the price point of 2 Lakhs which is mouth watering; possible only because of the mass localization of the parts that Bajaj have taken up bringing the price down giving a very tough competition to the rivals. For anyone whose willing to graduate from the 250’s this price point would be walking on a cheese cake.