Hyosong, one of the early players in India to launch bikes in the 600cc+ category has added another new bike to its existing Indian portfolio. The only naked bike which dominates the Indian roads presently is the FZ series of bike, which is merely a 150 cc bike. Now, here comes the next naked bike. 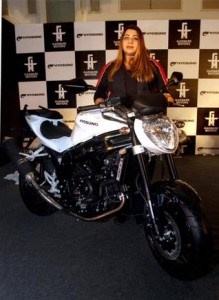 Naked bike lovers, not just in India but across the globe are usually left with not much of options in this particular category as these naked bike lovers claims that it is indeed a sensational category. The newly launched bike from the noble Korean stable is of course a naked bike as anticipated for quite a long time.

This new bike is yet another variant of its flagship sport bike GT650R and is named the GT650N. The GT 650N is projected s an ideal bike for high performance when it comes to speed and track oriented purposes. Bookings for this bike has already commenced since 13th of this month (yesterday). The bike will be made available across all the dealerships of the country which are present in Mumbai, Delhi, Gurgaon, Pune, Bangalore, Ahmedabad, Kolkata, Chennai, Goa, Cochin, Kolhapur, Indore and Chandigarh.

At the time of launching this bike, Garware Motors Managing Director Diya Garware said, “The GT 650N is a global success for Hyosung and we want to give you the best of what we have. We believe that today’s young and mobile Indian has a strong appetite for stylish bikes, and so, we see significant potential for these bikes in India.”

Garware Motors is actually a fully owned subsidiary of Garware Bestretch. Garware Motors has made a foray into the fast growing automobile segment across the globe by entering the powerful bikes segment and not into the commuter range. It then entered into a partnership with S&T Motors of South Korea which now manufacturers of the Hyosung brand. The brand has gained high levels of acceptance the globe in many markets like the U.S., South America, the U.K., Australia and obviously in many Asian countries too.

The powermill of this bike is the same 650 cc engine which powers the GT650R and the GT 650N is priced at INR.4.39 lakh, ex-showroom Delhi. It is made available in 3 colour schemes viz, back, red and white.

I really am impressed with the pricing of this bike as the company had not followed the same lane of premium pricing as it adopted for the GT 650R. What have you got to say about this bike now? Will it be a road butner. Leave your comments in the form of words below.