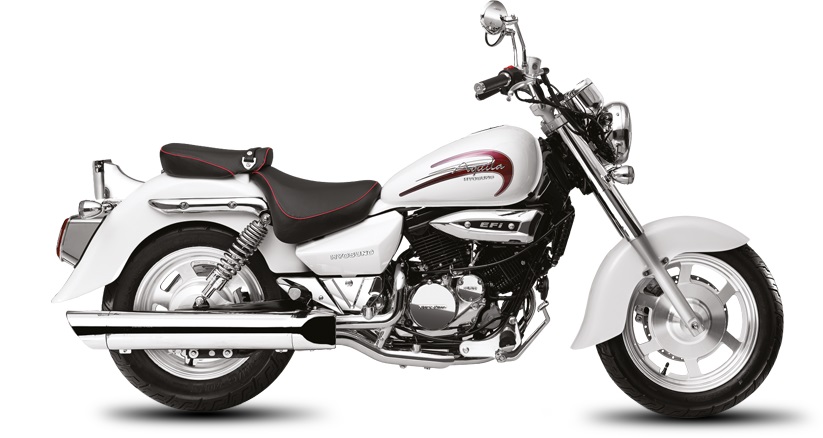 It is well-known that Hyosung is working on revamping their complete product line-up in a few months in the international markets. They have some interesting products slated for introduction and at least two of them – the naked GD250N, which was showcased at 2014 Auto Expo and its faired version GD250R have been confirmed for India by Shivapada Roy, COO DSK MotoWheels (more details).

Both these bikes are single cylinder 250ccs and will form the entry to Hyosung’s product lineup. Currently, DSK offers twin-cylinder GT250R in the sportsbike segment and Aquila aka GV250 in the cruiser segment. Both the motorcycles cost close to 3 Lakhs on the ex-showroom prices. It has been in the air for sometime that Hyosung is preparing a bigger 300cc cruiser and a report at Economic Times claims that it will be a single cylinder motor!

This is more or less a conflicting report as the 300cc Cruiser was/is expected to replace the Aquila 250, or will the new single cylinder Aquila 300 sit under the twin-cylinder 250 to form a more affordable option? We are not sure at this point of time but what is interesting to note is that speculative/rumour bits on 300cc cruiser have started to sneak in, which means we should be moving closer to its public unveiling in a few months…

Apart from this Shirish Kulkarni, Chairman of DSK Group, said that they are eyeing the localization route in the coming 17 to 18 months and this should bring the prices down to around Rs 1.75 Lakhs. He did not specify which bikes did he mean but we assume he must be talking about the existing two-cylinder motorcycles as the single cylinder GD250s are anyways expected to be around or lower than this price bracket if they have to make some sense.

He also said that for the time being only Hyosung bikes are expected to be localized and Benellis will continue to be local assembly from internationally sourced CKDs!