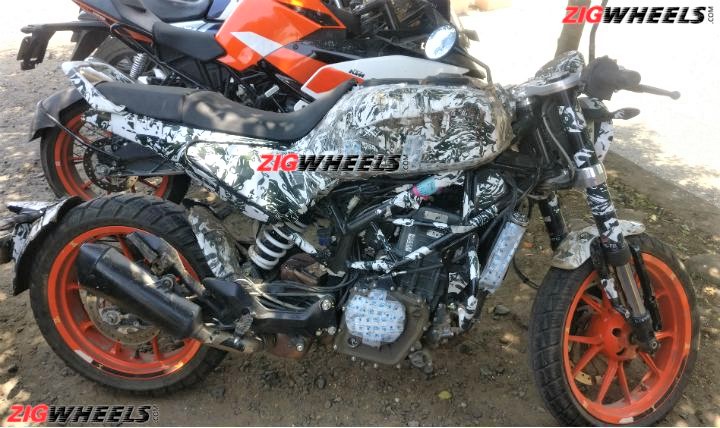 Husqvarna Svartpilen 401 launch expected in the coming few weeks/months. Here we have the India-spec model running with many changes…

Along with the 390 Adventure, the entry of Husqvarna (another KTM owned motorcycle firm) has also got delayed in India, if we consider the initially announced timelines. There are two motorcycles which will be launched in India – Vitpilen 401 and the Svartpilen 401 – both based on the Duke 390’s platform.

Husqvarnas have been under test since the last many months but spy pics dried up in the last few months. A new spotting of the Svartpilen 401 has been reported by Zigwheels. And the motorcycle gets many India-specific changes.

As a first, that saree guard is the first giveaway 😀 . Next up, this test mule is still running on alloy wheels sourced from the Duke 390 in place of the spoke-wheel tyres of the international-spec model. Will this change in the production model? We have no clue at this point.

Another change is the new placement of side blinkers by the sides of the tail lamp. They are placed on the tyre hugger in the international-spec model. Husqvarna has also plonked a grab rail to that weird looking tail, making it look weirder!

The report informs that in place of the Pirelli Scorpion Rally STR tyres of the international models, this test mule may be running on knobby tyres made specifically for this bike by MRF (which is a direct hint of cost cutting). Does that mean that Bajaj-KTM may be planning an aggressive price point for the Huskys?

Husqvarna’s launch is expected in the coming few weeks/months and it will be sold via the KTM’s big sales network in India. We were expecting a placement higher than Duke 390 for these models but presence of some cost cutting bits, specially those MRF tyres in this latest spotting have left us confused. Are we up for some surprise..?