Don’t go by its name – its a misnomer! Apart from the regular X-Blade which was unveiled at the Auto Expo and launched recently, Honda also showcased its adventure version; which is nothing but a few cosmetics slapped-on which do enhance the visual appeal of the motorcycle but fail to boost the motorcycle’s off-road credentials!

X-Blade Adventure Changes – So, what is different?

X-Blade Adventure gets these four accessories

Apart from this it is painted in an interesting matte grey theme with yellow accents pumping in a wee bit of ‘rugged’ feel. 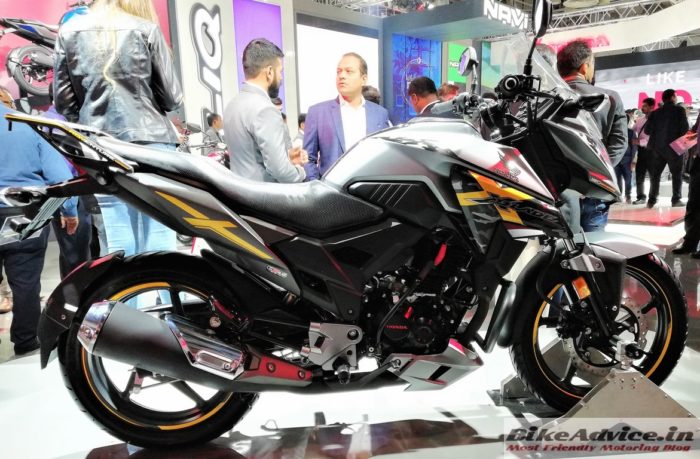 We have learnt that this adventure kit will be offered, most probably upon or soon after the motorcycle’s launch.

But it would have been more interesting if Honda would have opted for some deeper changes like long travel suspension, on-off-road tyres etc to enhance the real off-road going ability of the motorcycle. This way, they could have strengthened their 150 cc lineup – a street machine in the form of Hornet 160R, extremely utilitarian Unicorn 150 and then this – the mild adventure motorcycle. But Honda has other plans and they do not see many volumes in the entry ADV segment probably…