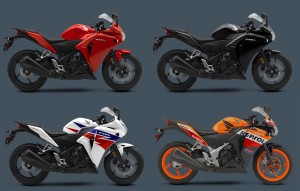 It’s been a year and a half since Honda had launched one of its brilliant Masterpieces, The Honda CBR250R, which created a huge wave not just in India, but also around the world. And later on followed the CBR150R, the younger brother of the 250R to the Indian market with new colors and outstanding build quality. Well now it is the turn of the bigger brother to get more aggressive as Honda has officially announced all 4 new colors to the CBR250R. The new colors are Black, Red, Pearl White/ Blue/Red and Honda’s favourite REPSOL color. The new colors looks brilliant and will attract more buyers and bike lovers, especially those who always wanted a REPSOL, what better can you expect?

And personally being the CBR owner, I really wish I had all these colors when Honda launched this bike in 2011. I might have had to spend more time deciding on the color than on the amount of time I had taken to zero down – which bike.. 😉 But on the downside, it doesn’t seem like an upgrade and other than the new colors, nothing else has changed. Anyways, what do you guys feel about the new colors on the CBR250R??