The reason I changed my mode of commute to my office from Delhi Transport Corporation (DTC) and Blue line Buses (Private Buses allowed as Public Transport Buses allowed to operate in the city) was long wait for buses at the bus stop, crowded buses filled by brim and un-professional behaviour of the Drivers/conductors of the blueline buses who cajole the passengers at every bus stop to take the bus, though filled to capacity and no space for a fly. 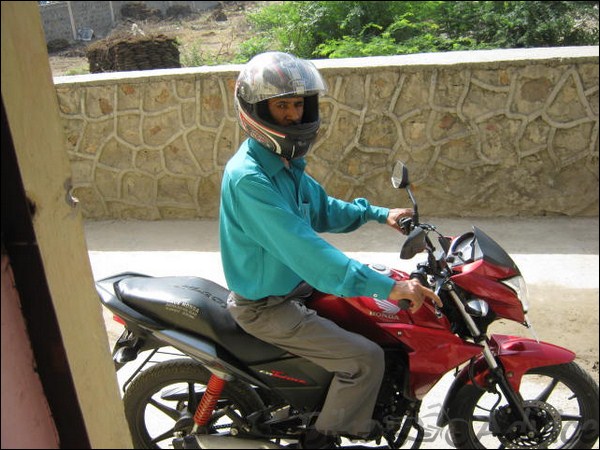 The passenger inside the bus – office-goers/sick patients/elders/ladies/school going children etc., how important it was there to reach their destination, – the hospital /school/workplace, the buswala drivers/conductors were not in a mood to hear their requests. This is one of the topmost reasons of the failure of the Blueline Buses in Delhi city.

Ultimately on a Sunday morning I decided to purchase a bike for my daily commute. We went to a local second hand two wheeler market to explore the possibility to procure a bike. The main criteria for the bike were looks, usability, and comfort. After looking and testing several options, a Bajaj Discover 135 Disk Self Start model 2007 was purchased.

This bike remained my ultimate companion till the 1st quarter of 2011 It was serving me dutifully and touchwood never in my daily routine have disappointed me in thick and thin of the times.

Wake Up to a Dream

In the month of Nov-Dec 2009, I have seen some images of Honda CB Twister in the Bike Magazine and kept an open eye for the launch of this motorcycle and as soon as it hit the market in March 2010, I went to nearest Honda 2 wheeler dealer for a ‘Dekho’. There was this kike in the fresh yellow shade displayed prominently in the showroom. 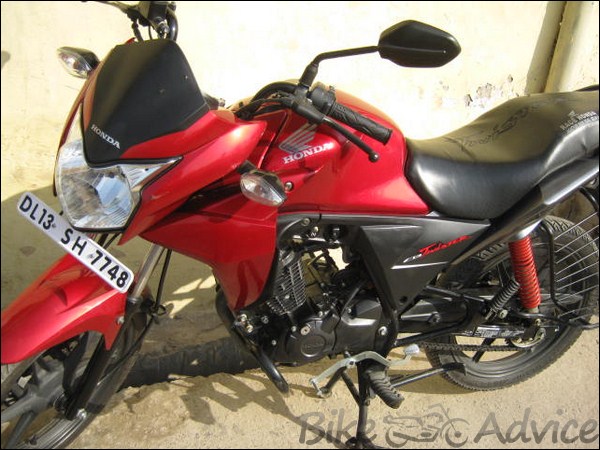 The body language of the bike says sharp angled contours, aggressive yet cool looks. I was impressed with the looks of the bike. There is one thing which was not seen as good was its thinner rear tyre. So, I postponed purchase of this newcomer for another 6-8 month to see how much water it splashes in the Delhi monsoon roads.

Due to some unavoidable circumstances, I refrained to procure a news bike for another 5-6 months. But I was constantly seeing the reviews of this bike.

One fine morning of March 2011, we went to the nearest Honda dealer to test ride the vehicle. The test-ride was done on a test vehicle and I was impressed to see the performance of this small beauty. I immediately decided to purchase a Red colour CB Twister bike. The sales executive informed that the red colour model was out of stock and persuaded me to purchase Palm green colour bike displayed in the showroom.

The green colour bike was quite impressive, but my 1st choice was red colour. So I thanked him and proceeded to my home without making any purchase. However, on the way I made a call to another authorised Honda dealer who informed that the red colour model was readily available. We went to the showroom and purchased the bike.

When I made the first glimpse to the Twister, the first thing I liked was its stunning design. This is the design which was never seen in any entry level commuter bike in India before. The bike is having look of a sports motorcycle. It has edgy details, impressive trendy short muffler exhaust. Fuel tank perfectly curved design. 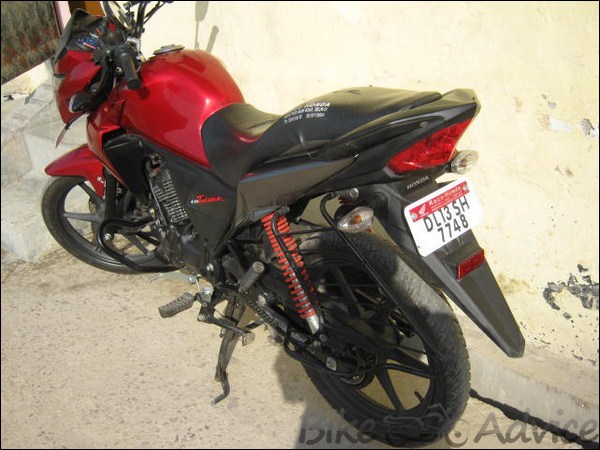 It has well padded Seat which is neither very hard nor very soft cushioned. It does not give any fatigue while riding for longer period of time. Wheel rim are well designed. It has tubeless tyres which are first in a commuter bike. When bitten by a small thorn or nail they hold the air for the extra period of time so that you will not be left stranded due to punctures, the Twister will definitely bring you to your home.

The weight of the bike is 110 Kg only which is good for flickering in the crowded roads of the city like Delhi. It has a set of MRF Tube-less tyres, which is a first in a commuter motorcycle in India. It is very useful when punctured with a thorn-wire-nail etc. It will not let the air out instantly and you can safely go to the nearest puncturewala who will mend it immediately without removing the wheel of the bike. 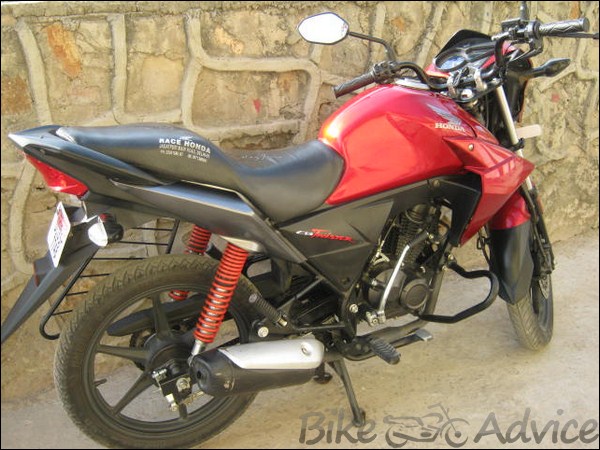 Tail light and turning indicater lights are very good. The front light of the bike is not very bright, especially since it has not DC light system, (which is standard feature in some of the rival motorcycle models,) riding in slower speeds in the dark make it not very pleasant to ride. Absence of a pass switch is also missed in the CB Twister.

A toe only gear change lever/pedal was not liked by me after using the bike as it has damaged my formal shoe. Honda should change it with toe and heel pedal since it is a commuter segment bike and it will not ruin the shoe of the office-going riders. Though the seat is quite comfortable for the rider as well as pillion, it is not so comfortable for sari-clad women pillion riders due to its tilting design. For Design and Build Quality I will give the bike 8.5/10 points.

In a big city like Delhi were there are traffic signals at every few meters of the roads, the instant start and stop system is boon to save the fuel and ease the commuting discomfort. The CB Twister is equipped with an excellent electric start system which instantly starts the bike with just a light push of the start switch. It has a good zippy engine.

It sends forward the bike instantly at green signal of the traffic light ahead of some of the more cubic capacity bikes, which is boon in crowded city roads. Though the feel of the bigger bike, its narrow dimensions make it very easy to use the small gaps in the city-traffic. The engine of the bike is very efficient and stress-free for riding with a pillion.

The good shock absorbers of the bike make the journey pleasant on the bumpy roads. Handling is very good. Comparing to my earlier bike Bajaj Discover 135, since this bike is 25kg. Less in weight, it is much more easy for handling. It gives more mileage per litre of petrol and is more comfortable to ride.

For Ride and Performance I will give the bike 8.5/10 points.

One of the most important factors deciding to purchase a two wheeler in the commuter segment is ‘the mileage it will deliver’. The Twister is a fuel efficient bike. It gives a true mileage of 58 to 65 km per litre in the city-riding condition, depending upon the riding habit of the rider. During the early run-in period it has given a mileage of 68-69 km per litre when I have restricted riding to 45 km/hr. 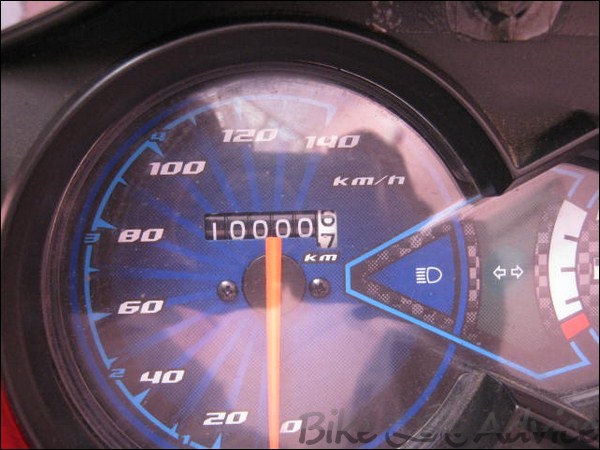 At completion of one year it was giving 58-60 km per litre mileage @ average speed of 45-55 km/hr. I am giving it the visit of the Honda authorised service centre at recommended periods and got changed its air filter at the latest service this week. I am optimistic that mileage will increase after giving it a new air filter. Since I have not taken the bike for a long highway journey, the fuel efficiency for the highway riding is not given. If you handle the bike with great affection and keep it up to date with servicing & maintenance, it will serve you better returning good mileage.

If you want a fuel efficient comfortable executive commuter city bike with good design and not regret spending five thousand extra rupees, the bike to purchase at this movement in the market is Honda CB Twister. The Engine is very good, styling is top class. Yes some minus points are there, such as the bigger bolts which fastens side tank shrouds having bad quality polish- which attracted rust within five months of purchase, or rubber dampener of the main stand of the bike which was replaced within one month, or paint of the side stand which peeled -off within five months. 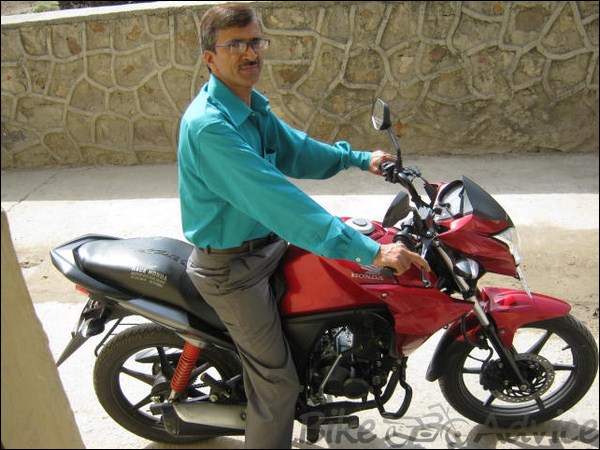 But these are minor things, which can be ignored considering plus points of the bike. However, the Honda manufactures should consider these points for betterment of the quality of the future batches of this bike. Considering its good design, good mileage, good comfort and good performance, at present it is the top model in the entry level executive commuter segment bikes. Ride it and feel good. Happy riding.