There was recently news that Honda may launch its VTR 250cc in India. This news got materialized with further developments in the situation. Recent developments show that Honda Motorcycles and scooters India (HMSI) is seriously planning to launch the range of 250cc bikes in India. 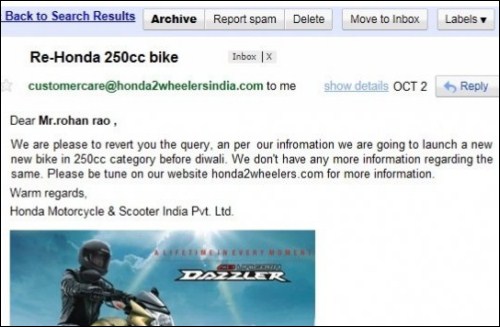 A copy of the mail sent by an executive of HMSI confirming the news.

The latest mail and the news confirm that the Honda Motors and scooters limited are going to launch a new bike in the range of 250cc before Diwali. An email from an executive confirming the news has made us believe the same.  We will have to see if Honda sticks to its promises or not. But as far as the launch of at least one 250cc bike is concerned, Honda is serious about it.

The bikes that may come to India are CB259, CBX 250 Twister or Honda VTR 250. In any case Honda is going to launch its 250cc bikes in India in couple of months from now. There were prior speculations about the news but the mail confirms it all that HMSI is soon going to come up with a 250cc model.

Spy screenshots below shows that an advertisement is being shot at Thailand. Folks, I know one thing for sure, sooner or later Honda is going to launch all its 250cc models in India. For now we can expect some good 250cc powerful model. Lets keep our fingers crossed and enjoy the screenshots. 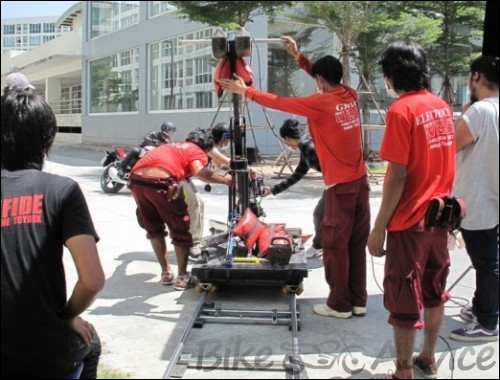 Image showing the shooting of a bike commercial in Thailand. 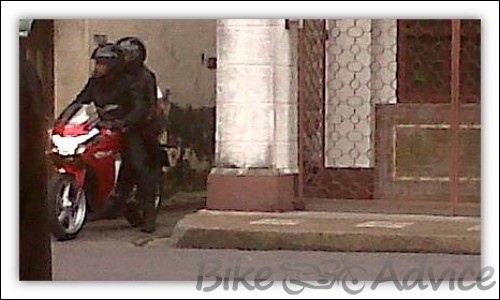 Spy Screenshot no 2 of the commercial showing the bike that is being shot.  Whatever Honda may do, assure yourself that 250cc Honda bikes are the future of Indian biking.