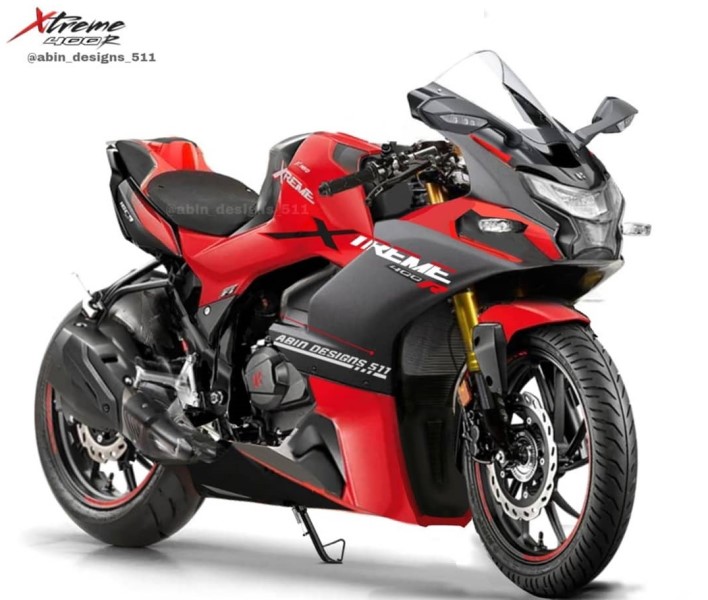 This Xtreme 400R is imagined as a full faired version of the humble Xtreme 160R and it looks handsome! May be some day’s Hero’s Apache 310 rival!

There are two things that we must accept – one, that the Xtreme 160R looks brilliant and two, not many people are hopeful of a 400cc motorcycle from Hero anytime soon. So, on this pretext, let us talk about a wild fantasy of some designer who has imagined a ferocious looking Xtreme 400R.

As its name suggests, it is a full faired version of the Xtreme 160R and takes a lot of design cues from the humble 160cc streetfighter. Abin_Designs, the originator of this dream machine, has showcased it in two different color shades – red and white, with black as the other dual tone shade in both.

The Xtreme 400R carries a bulbous fairing along with golden colored fat upside down front forks which give it a very handsome personality. While the front tyre looks slightly disproportionate, the rear rubber appears to have been fattened!

In place of the conventional handlebar, the low-set clip-ons on this model definitely give it a lot of aggression.

Hero MotoCorp has showcased a lot of extremely futuristic machines, including the 620cc Hastur that was claimed to be capable of a top speed of 240 kph, back in 2014. However, even after seven years, its biggest production motorcycles remain (almost) conventional sub 20 PS 200ccs.

But of late, the company has shown intent in moving towards premium, sportier models. And though not anytime soon, but in the coming few years, we would definitely expect them to bring in something on these lines, to rival Bajaj’s and TVS’s models!