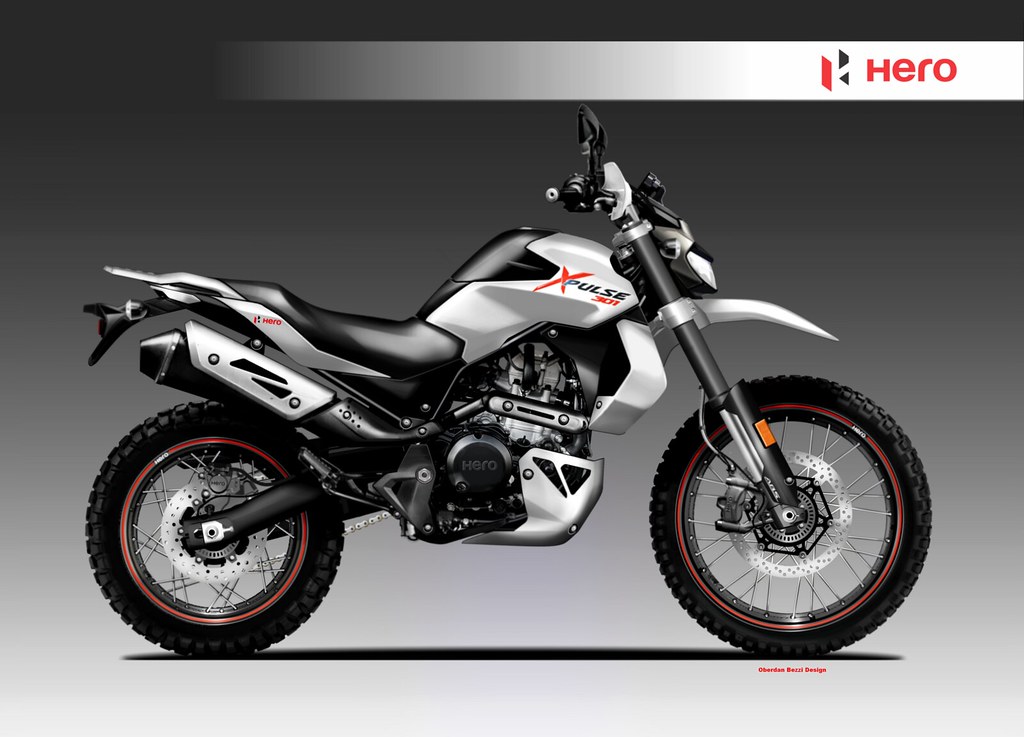 Hero Xpulse 301 pic (speculative rendering) gives food for thought to India’s biggest maker. Don’t you think a bigger Xpulse on these lines will be a killer?

So, after a very long wait, Hero has managed to deliver an exciting motorcycle in the 150cc+ segment in India – Xpulse 200. According to initial reports, Xpulse 200 has been received well by bikers and the motorcycle commands a minor waiting period. There are three other motorcycles in Hero’s 200cc portfolio – Xtreme 200S, Xtreme 200R and Xpulse 200T.

Apart from this, Hero also showcased a near 300cc motorcycle at the 2016 Auto Expo in Noida called as XF3R (more details). Though it never talked about this streetfighter ever after but Hero is continuously harping about ‘going premium‘. One top official, in fact, recently said that they want to be among the top sellers in the premium segment within the coming 3-4 years (more details)!

So, there is a lot happening inside that Jaipur’s CIT (Hero’s Global Centre of Innovation and Technology). How much of it percolates to the market remains to be seen. But one interesting update on the interweb caught our attention. Oberdan Bezzi, an Italian automobile designer has sketched his version of an imaginative Xpulse 301!

Oberdan says that Xpulse 301 is a single cylinder motorcycle with a four-valve, liquid cooled, near 300cc engine. According to him, this Xpulse 301 is an ‘attractive, all-purpose’ motorcycle with off-road attributes. He believes that something of this sort will give Hero the shape and showcasing capability of ‘achieving premium products’.

The speculative rendering of Xpulse 301 looks killing. It gets an aggressive adventure pose with long-travel upside-down front forks, knobby tyres, an exhaust which protrudes by the side of the seat (like XF3R) and a raised front mudguard.

We don’t know if such a thing exists within Hero’s R&D at the moment but a motorcycle even remotely close to what is being imagined could help make Hero’s mark in people’s minds in this fast-growing segment. For now, we are all set for the KTM 390 Adventure!