Hero stall at the Expo had a curious looking 2-wheeler called iON. This environment-friendly Hydrogen fuel cell vehicle concept garnered quite a lot of eyeballs. The bike looked unconventional to begin with and a deeper study revealed what the future of 2-wheeled personal transport could be. 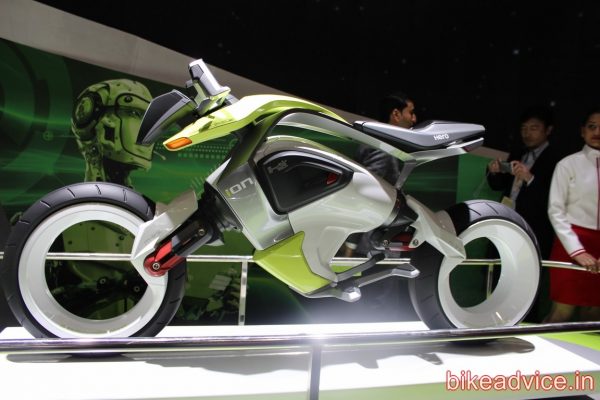 The electronic iON runs on hydrogen fuel cell mated to batteries and super capacitors to store and smooth out the power and torque required by the rider. The batteries themselves are radical lithium-air known for their extremely high density energy storage. No chains or shaft here on iON, instead the bike propels itself using the magnetic levitation technique through a hub-less electric traction motor on the wheels. The same traction motor doubles up as brakes as and when required.

The first thing that strikes the viewer is the omission of traditional suspension system. In its place is what Hero calls the m-link, which utilizes magnetorheological (phew!) damping capable of adapting to the road condition real time with the help of several on-board sensors. These sensors continuously vary the power reaching the electromagnet that controls the damping characteristics of the suspension system. 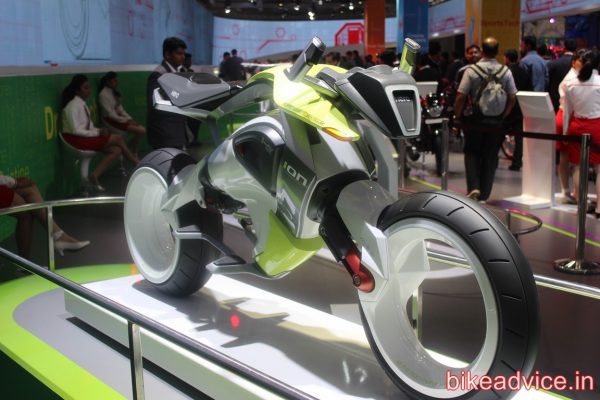 The steering, similarly, is through a rotating front and rear wheel and suspension systems around the pivots that are mounted on the power module. (You still with me? Good then)

The bike has multi-axis gyros and accelerometers which maintain the bike’s stability at all times and the sensors for VSA (Vehicle Situational Awareness) keep track of the surrounding traffic flow and make corrections to the PBS (what in the world is that!) systems as needed.

Basic info about the vehicle is available in the compact instrument cluster and full info and communication is transmitted to the rider’s helmet. The VSA system overrides any lower priority communications when traffic density becomes significant.

No, it doesn’t give milk. Not yet.