Hi I am Gowtham, doing my 2nd year Mechanical engineering, I am a regular follower of Bikeadvice and this is my first review on my favorite friendly forum, so please forgive me if there is any mistake in my review. Now let me get going with my story. 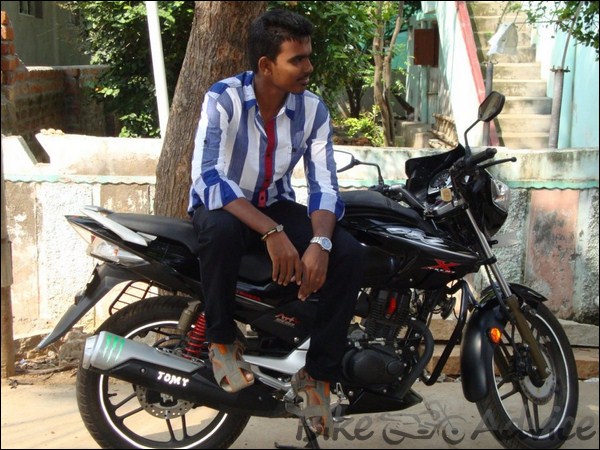 My craze on bikes started at the age 10 at 4th standard, I used to get on my dad’s bike (Bajaj 4s champion) and change gears and bend on it like a Moto GP racer the bike which impressed me at that age was the Karizma which was launched that time. It looked like a race bike for me, I saw it for first time near my school It was a black Karizma.

After few days on a Saturday morning while I was doing cycling a black bike crossed me like Zoom and stoped near my house, I was amazed to see that our neighbor Anna (Brother in Tamil) had bought a Karizma and I was happy that a Karizma is near me. 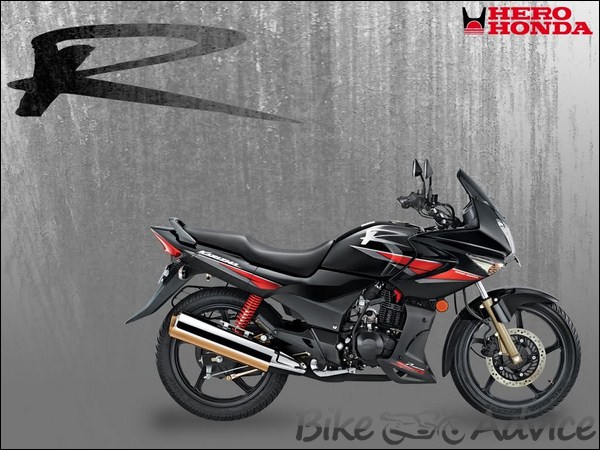 The very next week another guy in our street also bought a Karizma now we had 2 Karizma’s in our street, I used to say to my friends in school that we have 2 Karizma in our street with gr8 pride. They both used to wipe their bikes in the morning at 7:30 for that I used to get ready to school early and go to bus stop which was near their house.

They used to roam around the streets on their bikes and they looked like heros at that time to me so I thought I will buy a Karizma when I go for college (Karizma which became my dream bike). As days passed the biker inside me started to grow many bikes came to market (Pulsar, Apache, etc) but my mind was fully on Karizma I used to get the pic of Karizma when ever possible.

After my 10th standard I joined my Diploma in Mechanical in the year (2009-2012) then I started to know more about bikes and working of engines, Then I started to see the specifications much more than the looks of the bike, it was the time at end of 2009 a nuclear bomb name the R15 blasted on me. 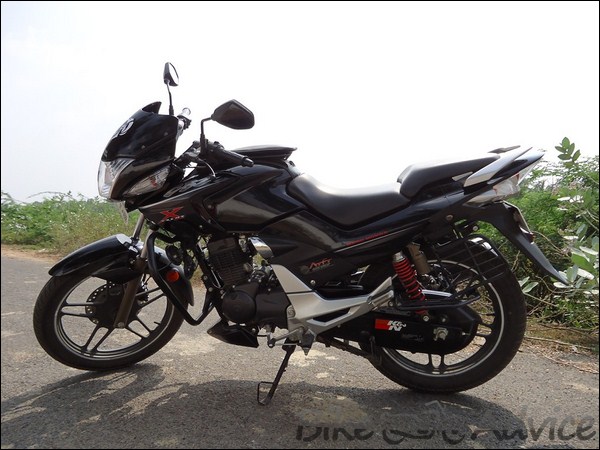 I know all of us have an eye on R15, my dream bike Karizma was standing at a long distance from R15 I became a mad fan of R15 so I asked my dad can I get the R15 rather than Karizma he agreed for it and said to me that he will get R15 when I reach my 3 year in Diploma and get my driving licence.

In the mean time one of my friend got the R15 limited edition (red & white) that’s my friends bike in one of the photo which gave me a surprise. I used to ride it often and the feel of riding it made me damn sure of getting only an R15. I was using my dad’s Bajaj 4S champion while doing my diploma before that I was riding TVS 50 during my school days.

Then finally I was in the final year final semester of Diploma then asked my dad about R15. He said all right we can buy it even today if you want at that time I was the happiest man in the world. 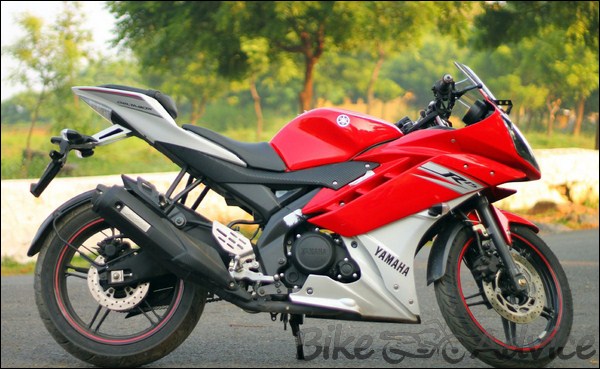 We went to the Yamaha showroom and I did not see even a single R15 there the showroom people said that there is gonna be a new model of R15 named the R15 v2.0 and I can get it within a month I said OK thinking that R15 is great then v2.0 will be much better.

I started to browse on net for images of v2.0 the photos of v2.0 were very rare on net. I started dreaming with the photos I got, within a month time the show room people called me and said that the new model is in the showroom and they also added that I can take a test drive and take it if I like it. 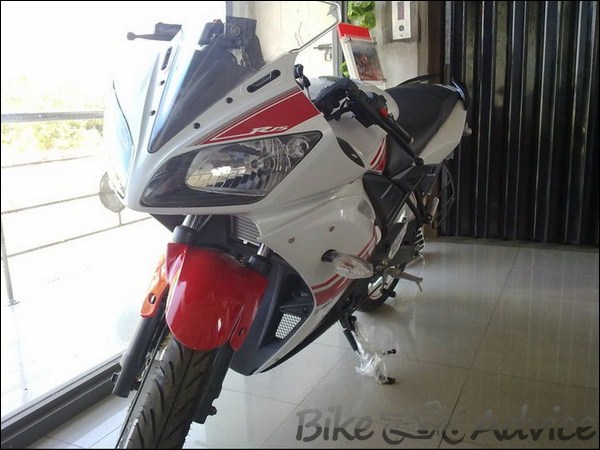 Next day me and my dad went to the showroom and spoke to the showroom people and took one of the bike for test drive (on seeing v2 for the first time I thought why the Hell did Yamaha people change the old model) while riding I felt no difference in control etc.

Then I told my dad to ride it and I sat on the pillion seat and I felt as if I am sitting on my dad’s shoulder and felt there is no support or grip. Every time my dad pushed the brake I leaned over my dad then I thought of my mom’s condition and she could not sit on it and with some personal reasons and great pain and scolding to Yamaha I dropped out R15 off my mind. 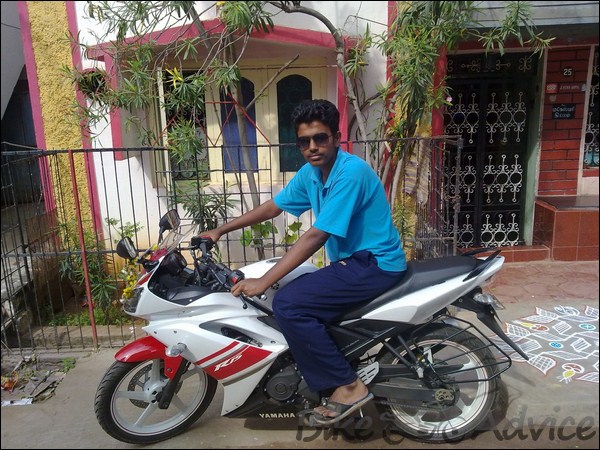 In the mean time I completed my Diploma in mechanical and joined Engineering in mechanical at 2nd year, I came back to my dream bike Karizma, also the new model of Karizma (ZMR) attracted me I went to the Hero Honda showroom and asked them about the onroad price etc. I first sat on the bike and took a photo and I felt that I look too tiny compared to the size of ZMR.

After so many confusions I became a little fedup of bikes and stopped thinking of getting one for me. One day my friend said that he is going to buy a CBZ Xtreme (single disc) in a short time. I was not much interested in it because of the heart breaks I suffered with the R15, Karizma and ZMR. 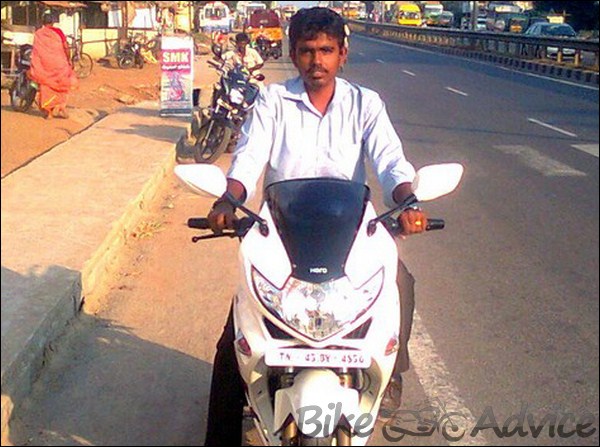 Then he bought the CBZ as he said and he brought it to us. I did not feel anything special on seeing it like I had on R15. We all went for a ride on his bike, while my turn of riding came I felt as if its very big and I was surprised that within a sec I got the full control of the bike and felt it has become so small now.

I was feeling more comfortable while riding it; I felt no pain on hands due to turning of the bike even it a 150 kg bike CBZ impressed me a lot the way the digital speedometer turned on, the placing of indicators, clip handlebars etc… now I started to read reviews of CBZ on BikeAdvice, and other websites and finally came to a conclusion that I will go for a CBZ Xtreme.

My friend recommended me to get Double disc since the braking efficiency will be better in double disc and he felt that single disc is not sufficient for sudden breaking and the other reason is double disc is just 2k costly than single disc. 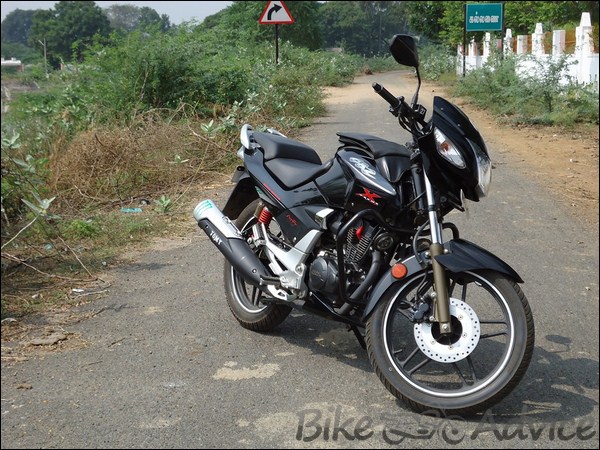 I went to the Hero Honda showroom and asked the onroad price of Double disc CBZ and made a token advance then they said that I can select my bike from the new bike garage there were only 3 double disc CBZ. I asked them for test ride they gave me test drive and after so much talking I tested all the 3 bike and selected one from it after 2 days on (16/08/12).

I booked it on my dads name and went to see my black Horse. It was standing alone like a war horse I felt like a Knight when I saw my horse, then while leaving the showroom I saw my horse through a door gap I felt like its saying me to it with me soon.

The very next day (17/08/12) I was very happy that I am going to get my horse today. Went to college in the morning but my mind was full of my horse. Came from college in such a hurry and got ready to go for the showroom to get my black horse for delivery.

When I reached the showroom with my friends, sister and Dad I saw my love Black horse was standing neat and clean, it was shining like a black diamond completed all the formalities and grabbed the keys and ran to my horse.

Then after some poojas I took the bike out with my friends clapping and shouting. And now after 6 months completed 5000 km I thought I am eligible to write a review about my bike (black horse). 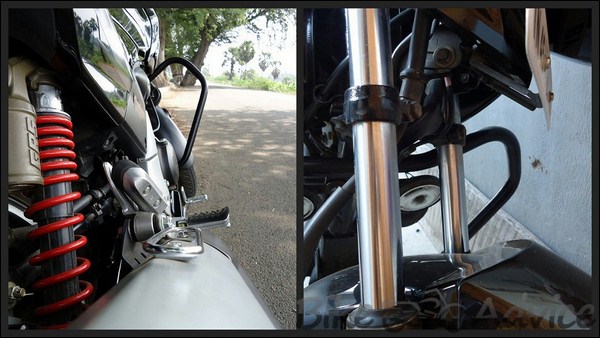 We can find the specification of it on the internet so I neglected it. 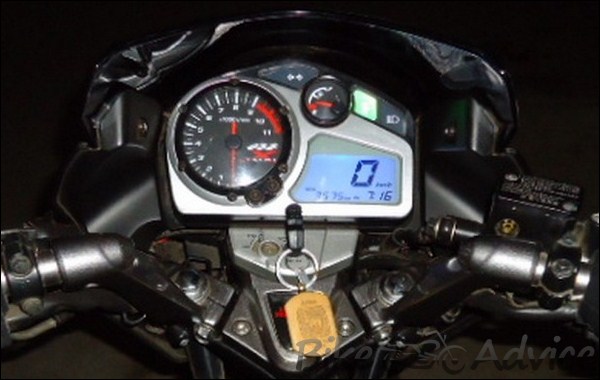 The digital speedometer is the main looks on CBZ with rpm meter on left and speed meter (digital) on right and the fuel gauge on the middle top between the rpm and speed meter & common features like signal, high beam indicators. 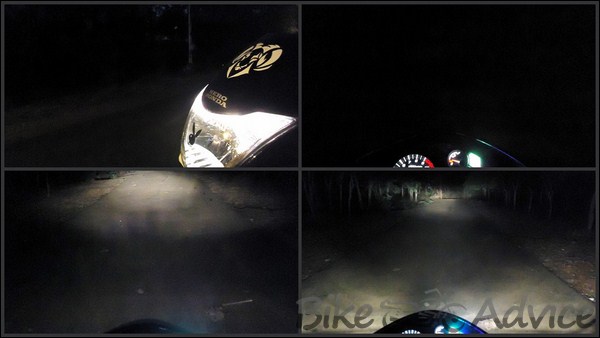 CBZ has a single bulb as eye light which is reflected and seen like double eye light and it looks attractive the high beam and low beam are great and gives more visibility so no need of upgrading the stock bulb its more comfortable even at night riding.

The tank scoop gives an added muscular look to the horse.

There is no need of thinking that the indicator will get damaged while parking the in bike parking and its an added advantage.

No need to worry about the chain getting exposed to mud and sand which may reduce the chain life in that way we are safe.

You can feel the suspension effect when ur riding on bumps etc you will feel just a little jerk.

The Braking efficiency is awesome when using both the disc the bike comes to rest from 100-0 km/hr in just 5 sec without skidding. The brakes give more confidence while cornering the curves and more confidence in riding.

With the clip on handlebars which is wider when compared to the other bikes and Double disc adds awesome control to the horse. Its stable and you will feel the control of the bike always even in slippery roads.

“How you behave to your bike the same it behaves to you” if you ride it in a proper way it gives a better mileage (suits for all vehicles). 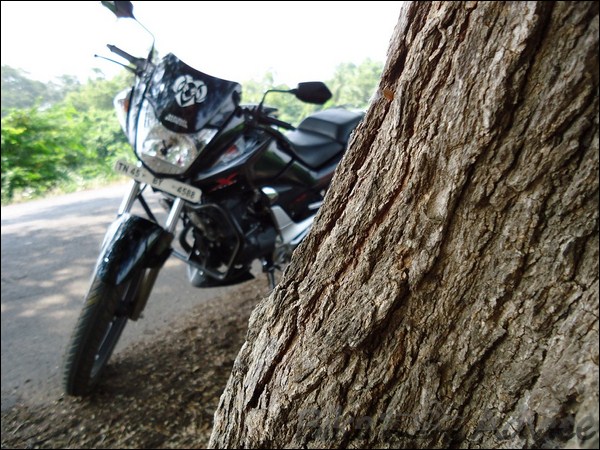 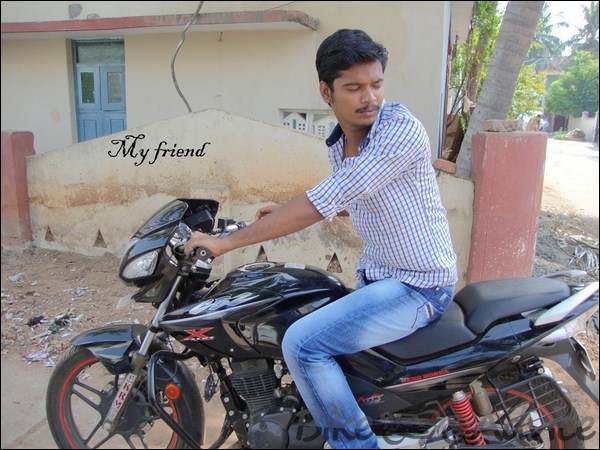 I have not gone for much long trips I used to go places within 70km radius but I used to go to my native place, near Kodaikana often which is 125 km from my home with my dad mostly. 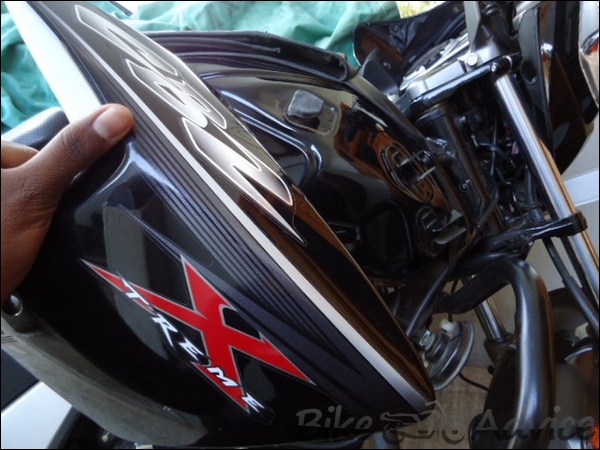 CBZ is a great bike, a person who is less than 5.7 cannot get the control of the horse completely, if you are a guy of height 5.10-6 ft, it is a perfect bike which suits you and you get full control of the horse. The mileage of horse even increases when all the services are complete. You can trust this horse and it will never let you down.