All you Hero Honda fans out there be prepared to spend extra because the company has declared a price hike between Rs.500 to 1500. This means that various hero Honda bikes will now be billed higher than they used to. The company has declared this price hike because of the rising inputs cost. This decision was taken up after the company observed that relative input costs of products used in manufacturing have sharply risen. 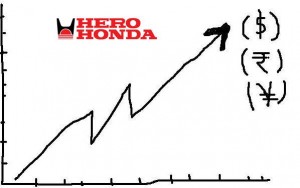 Hero Honda has planned increment of prices based on models i.e. bikes are going to be costlier depending on the model.

Hero Honda’s Vice president Anil Dua of Marketing and sales division said that the company hasn’t announced price hike since August 2008. He further added that various commodity prices are ever increasing and the burden is increasing on the company, thus some part of the burden has been shifted to consumers. In short, new Hero Honda enthusiasts should gear up to pay extra money in the range of Rs.500 to Rs.1500.