Arun has submitted this review in our Ownership Review Contest No 13, ensuring himself an assured prize. The contest also offers a chance to win Riding Jacket, Helmet and more…Here are all the details.

Hi, I am Arun. Like every automobile enthusiast I too grew fancying everything that had wheels. My craze towards automobiles grew as I grew too. From the start I wanted to become an automobile engineer so was determined to pursue a career in automobiles. 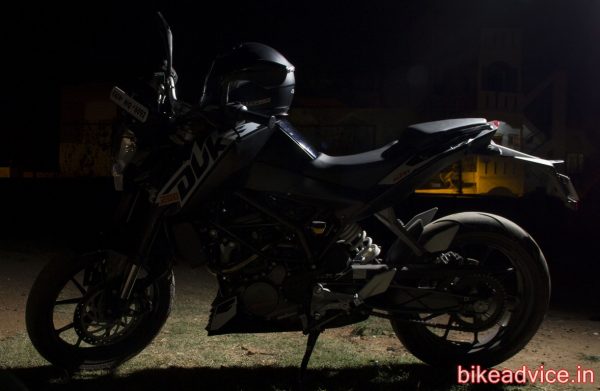 After my 10th class I applied for a diploma in automobile, but destiny had some other plans and I became a Software Engineer. As usual after my engineering joblessness hit me, very hard!!!! Nearly two years after my graduation I secured a job in a Govt Organization. Immediately after I joined the job I sold my old bike.

Yes I owned 1st Bajaj Pulsar 150. I do have some good memories wit that bike. It had my favorite color Black!!!! And fancy number too 4444!!! It always had a few niggles which I could live with. It was not reliable as a Honda but it never let me down. This bike was with me during my jobless days and was faithful till the end. My first Tryst with Bajaj was a good one. Good bye fella!!!!

And now that I have got a job I have the financial freedom to get a good bike. Yeah that’s an awesome feeling….! And with it starts the tedious task of short listing the bikes and the loan procedures. Considered everything all the way from a humble Splendor to the Duke 390. 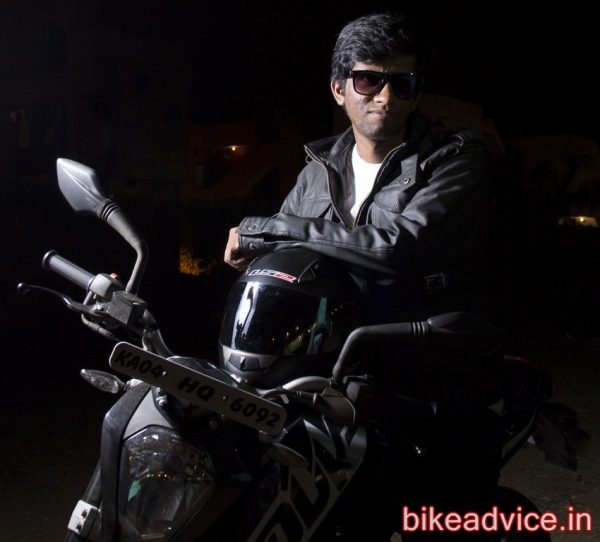 – TVS Apache 180 ABS– still a good “handler” and a sub 1 lakh bike to have ABS, but vibrations kept me at bay.

– Yamaha YZF R15– A strong contender till the end. I liked the looks quality etc. Two reasons I let it down was the power for the price tag. And the attitude of the showroom guys.

– Bajaj pulsar 200 NS– An awesome package at a mouth watering price. Hats off to Bajaj for giving such a good bike. Having Test driven the Duke the only problem I found with the NS was there is no “drama” (personal opinion) while driving it. Never considered the Ceebers as it was not to my liking.

Duke 390 – The 390 is mind numbingly quick. It would turn any lame rider into a lunatic. Combined with the ABS it has an awesome stopping power. An awesome VFM package. When you want to have such a powerful bike you should have the confidence to handle that power which I feel I did not have. I personally did not want such a powerful bike for urban driving. But that would definitely be my next upgrades in the future.

Now comes the toughest part getting the money…

Loan- This where I realized what an automobile NUT I am. Just 10 days into my first job I began hunting for the Loan. Luckily things fell into place and I got a loan in a nationalized bank.

Its an absolute delight to see a KTM Duke. The attention to detail is massive. Be it the aluminum swing arm, the fat inverted forks, the trellis frame or the under belly exhaust the designers have gone bonkers while designing the bike. The bike looks brawnier in its flesh. 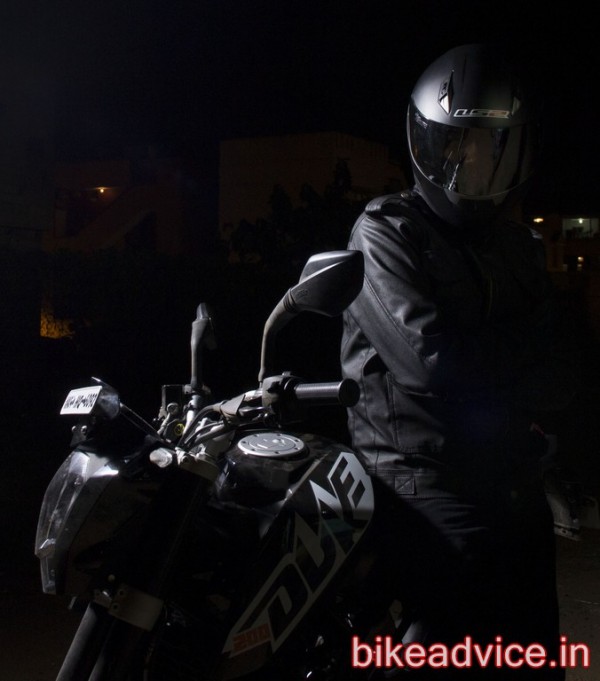 I don’t want to explain the tech specs instead I want to say consequences you experience.

It has some characteristics of a two stroke engine. With a power to weight ratio of 184 bhp/ton its true pocket rocket for the urban jungle. The 25bhp is realized with 6 speed short gearing. Gear box is the part which I like the most. Let me tell you how acceleration feels on road.

0-60 comes in 3.6 seconds. You have to shift only one gear to reach to 60 (i.e. from 1st to 2nd). So you have less than 2 seconds time between two gears. That’s how ballistic this bike is. It’s so eager to hit the rev limiter as soon as you pop the clutch. But the gearing has its own negatives too. It’s hard to ride the bike slow. This bike demands to driven hard. And top speed too is limited to 136 kmph which is slightly low.

The inverted shocks at the front are reasonably hard (personal opinion) but the results are amazing. At the start getting used to it is a tad difficult. You can literally “feel the road”. Slightest bumps are also felt. Suddenly all roads which you told perfect seem to be imperfect. The rear mono shock is hard even on a softer setting. 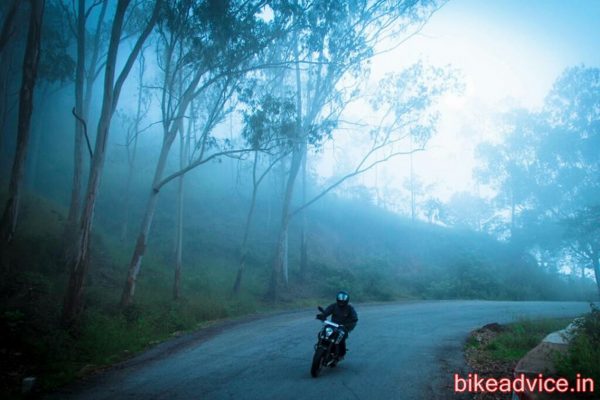 Combined with a bench like seat and a hard suspension long journeys can be little painful. What’s distinct with its handling is you feel like surfer on road. People who do lane changes at high speeds on a Duke will really understand what I mean. And last but not the least the mass centralization with the under belly exhaust. This bike will teach any novice rider to scrape the corners. Every corner makes you smile under your helmet. To summarize in a sentence “It’s like having a gymnast to a dance party She’s flexible but you have to make her dance“. This bike really dances to the tunes of the rider.

The brakes are massive speed shredder units. What really plays is engine braking is also too good while decelerating. The tires tend to skid under panic braking. ABS should be offered at least as an option.

They are soft compound tires and one of the best MRF’s I have seen. It sticks to the ground like a leech. It inspires confidence whether it’s braking or while cornering. If maintained well the tires can be reliable. The only downside is it’s prone to punctures.

To define it in a word it’s a “mini computer”. It offers you loads and loads of information all the way from a essential clock to low engine oil. Two features I like the most when the side stand is down the bike does not start in any of the gears. It’s a good safety feature. The other one is the headlight switches off when you press the start switch which helps in battery life.

I really liked the seating position. You sit straight on the bike which is commuter like and your legs are in an aggressive position because of the rear set foot pegs. It’s half aggressive and half commuter. The seat cushioning is very hard. Sometimes it’s painful even for short distances. One important criteria that I wanted in a bike was a normal handle bar. I personally dont like the split handle bars. Interestingly no bike above 1 lakh has a normal handle bar except the Duke and the Bullet.

I have done a couple of long journeys. I have driven 600 kms in a day and the bike felt good all through the journey. One thing I noticed is braking with a pillion inspires more confidence at high speeds. This bike is not exactly a tourer but it manages to cover long distances without any problem. The only problem I faced was the wind blast at high speeds tires a lot. 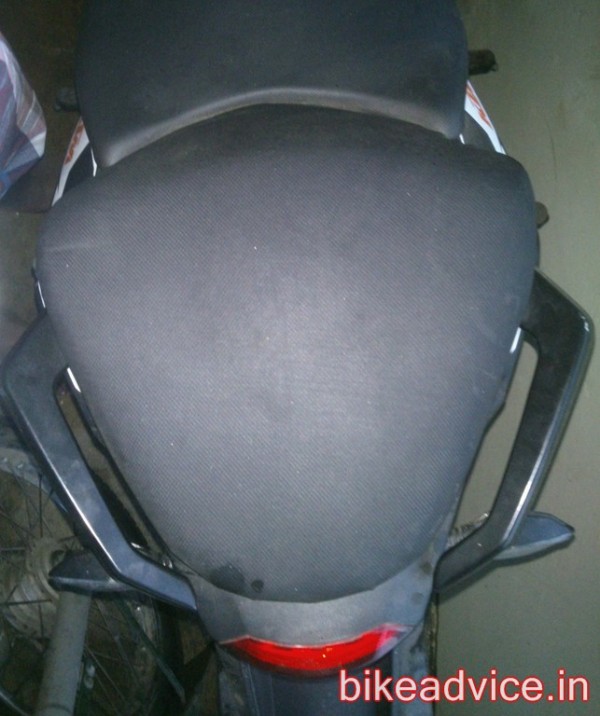 – Overheating- Till the 1st service the heat generated is very high. After that it makes its presence felt in traffic but its bearable. One thing I noticed during overheating was there is a slight power loss which most people don’t accept.

– Unstable: All the handling, power, chassis takes a back seat the moment you cross 110kmph. Till 110 kmph the bike performs like a dream but after that you feel a little unstable because of its naked nature. But its not scary though. You can feel the shortage of power when you want to accelerate. Nevertheless you can cruise all day at 120 kmph.

– Mileage– When driven hard it has returned me 22kmpl average. The tank is very small. With 8 liters of usable fuel, long journeys should be well-planned.

– Horn: The stock horn is horrible. 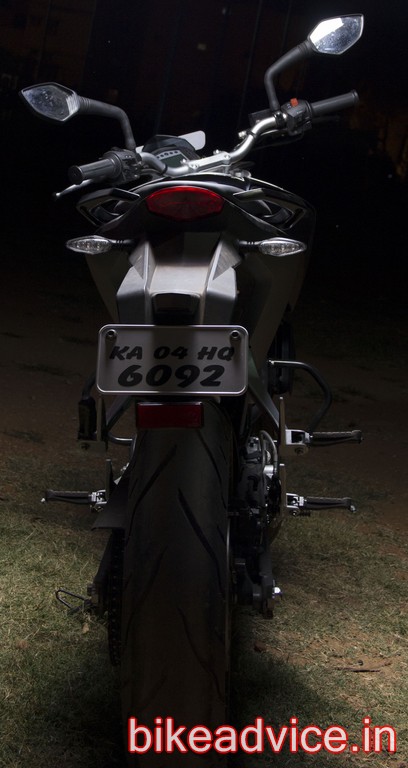 With the petrol rates increasing day by day even an avid biker thinks twice before investing all the hard earned money. They don’t expect a VFM motorcycle instead they choose a bike which gives more enjoyment and satisfaction for every kilometer they ride. With all the mass centralization, Trellis frame, fantastic engine etc puts a massive grin on your face which simply justifies the 1.5 lakh rupees price tag it commands. This bike makes me smile every second I ride it.