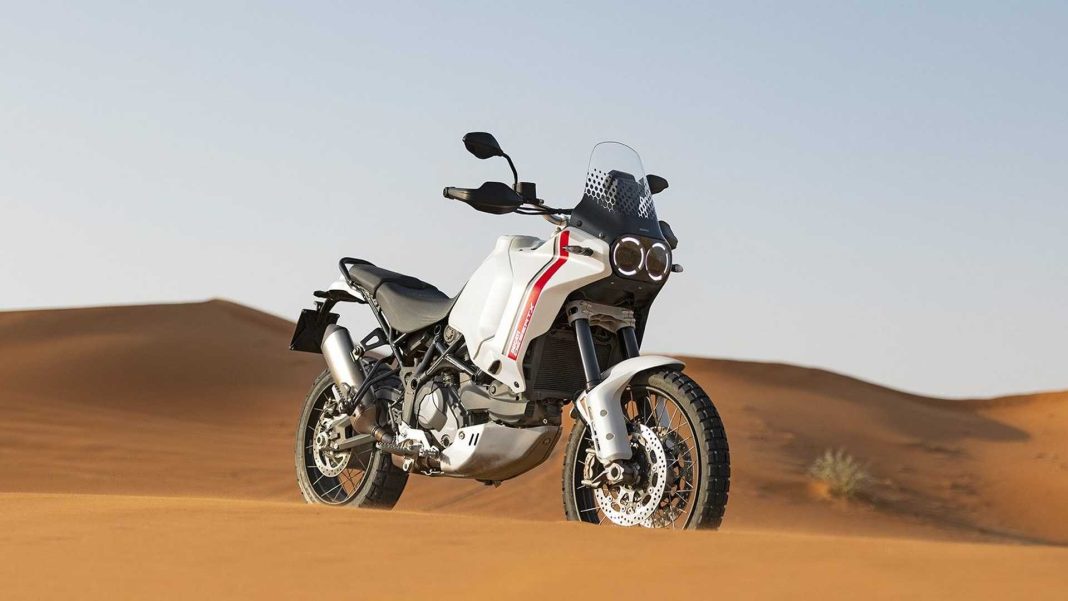 Ducati DesertX price in India is slightly on the higher side but it is one of the most interesting motorcycles of recent times. Key USPs – not very bulky and off-road credentials..

After unveiling it late last year, Ducati have officially launched the new DesertX in India. DesertX seems to be a statement clearly illustrating Ducati’s ambition. With their DesertX they have tried to fuse the retro styling together with adventure credentials.

Unlike the concept that was revealed back in 2019 (which was based on the Scrambler air-cooled engine), the new Ducati DesertX is powered by the Multistrada V2’s 937 cc liquid-cooled Testastretta 11° Desmodromic valvetrain engine that belts out 110 BHP of power at 9250 RPM and 92 Nm of torque at 6500 RPM.

Inspired directly from the real Dakar Rally conquering machines, the DesertX is providing an extra 8-liter auxiliary fuel tank as an accessory over the standard 21-liter capacity fuel tank.

Ducati have also changed the gearbox ratio making the first two gears considerably shorter for a better off road work while the third, fourth and fifth are moderate and the sixth gear being kept longer for better highway cruising.

For the first time in history, Ducati have set up the DesertX with a 21″ wheel at the front and an 18″ wheel at the rear to better tackle the wilderness or deserts. They have also equipped the bike with 46 mm Kayaba long travel suspension which is bolted to an all-new Steel trellis frame which allows a fantastic 230 mm of suspension travel at the front and 220 mm at the rear with tuning more focused towards off road riding. Further aiding its off-road credentials is that 250 mm of ground clearance.

Braking is handled by the Brembo system consisting of a pair of M50 monoblocks on 320 mm discs at the front and 265 mm at the rear. ABS functionality comes as standard along with lean sensitive ABS function.

The riding position has been tailored for off roading, with the rider triangle primarily focused for comfort in the standing position. There is an addition of Bosch IMU system which puts every safety system including engine braking control, wheelie control, cornering ABS, traction control and a quick shifter in the mix.

It also comes with a 5″ full color TFT screen which has all the connectivity options including turn-by-turn navigation and a dedicated rally info screen mode.

The company’s first off-road oriented ADV has been priced at a rather hefty 17.91 Lac ex-showroom Pan-India. The ADV is priced significantly higher than its direct competitors – Triumph Tiger 900 and BMW F850 GS.

It is available in Star White Silk color in India and bookings have commenced from today. Deliveries of the gorgeous looker will commence from first week of January 2023 onwards.