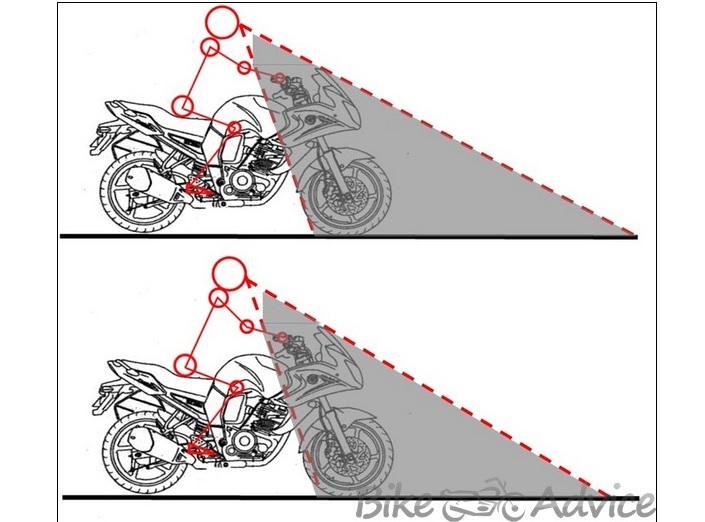 Though not as problematic as cars or trucks, but rider visibility issues in motorcycles exist and are often the cause of accidents…

On the roads rider visibility is the maximum distance at which a rider of a vehicle can see and identify prominent objects around him. Visibility is primarily determined by weather conditions and by a vehicle’s design. The parts of a vehicle that influence visibility include the Front Fairing, Huge Fuel Tanks and Wind shield (If provided).

The factors affecting visibility from a rider’s point of view are helmet design, riding habits, rider’s height and finally his ability. Good rider visibility is essential for safe road traffic. Blind spots may occur in the front of the rider when the fairing (also the windshield), rear-view mirrors, helmet and/or the tank block a rider’s view of the road. Behind the rider, there are pillion passengers and goods that may reduce visibility.

Detection of vehicles or other objects in blind spots may also be aided by systems such as video cameras or distance sensors, though these are not yet incorporated in two wheelers sold to the general public.

The areas most commonly referred to as blind spots are the rear quarter blind spots, areas towards the rear of the vehicle on both sides. These areas are shown with grey colour. Vehicles in the adjacent lanes of the road may fall into these blind spots, and a rider may be unable to see them using only the mirrors. Other areas that are sometimes called blind spots are those that are too low to see – both at the back as well as the front of a motorcycle. Also, in cases where side vision is hindered by helmet design, areas to the left or right can become blind spots as well.

Generally speaking, two wheelers with larger front fairing or body work have larger front blind spots. These blind spots are generated on the road surface and under the projected area of fairing. Obstacles on the road are partly or sometimes completely covered by huge fairings. Rider has to control his vehicle with the help of his experience only.

Scooters also fall in the same category as they have big front domes. For example, the blind spot in front of dirt bike could only hide small objects on the road; we can say negligible blind spots, while the blind spot of a sport or tourer bike can hide big objects and obstacles on the road, under the projected area of fairing resulting in accidents.

Effect of Height of the Rider

Rider height can also affect visibility. In some bikes the windshield is fillet with the roof-line with a big radius. This fillet round intersects with driver’s vision and creates visibility problems. Riders with small heights find problems to manage front and rear vision simultaneously in sport bikes because of turning limitations of rear view mirrors.

They also find difficulties in front vision while riding cruisers because cruisers generally have low seating positions and negative slope towards the headlight. A rider may reduce the size of a blind spot or eliminate it completely by turning his head in the direction of the obstruction. This allows him to see better around the obstruction and allows for better depth perception.

It is but obvious that helmet reduces the side vision angle by restricting the driver’s vision. Without helmet, our eyes can catch the moving parts within 180 degrees – on both the sides and we can grab our attention to those moving objects by turning our eyes along with our head. But when we wear helmets, this angle reduces to 150 or 160 degree and it becomes difficult to gauge movements beyond these angles. So with helmets it becomes essential to use rear view mirrors and turning our head from side to side constantly.

Effect of Other Automobile Design Factors

Other design factors may prevent a manufacturer from maximizing visibility. These include safety, as narrower headlights cannot provide better visibility at night. In the case of sport bikes, aerodynamics don’t allow the designer to create bikes without fairing. The slope given to windshield is to reduce the drag; it also forms another limitation for designers. Areas covered by rear view mirrors are affected by their sizes and shapes. Rear view mirrors have to provide sufficient rear visibility along with good aesthetics.

The vehicles are driven into the darkened lab and lights are mounted in a dummy rider’s eye position which is being used to project shadows on to a screen which is surrounded the vehicle in front, rear as well as bottom. The grid on the screen should be marked with a scale so that the edges of the shadow could be measured in terms of their distance from the rider’s eyes.

Firstly, a single bulb is used to project the shadow of blind spots on to the screen. Then, the coordinates of the upper and lower corners are measured to enable the area of vision obscured by the parts to be calculated. Then dummy’s head could be changed to one which had both left and right ‘eyes’ (bulbs) so that binocular vision and parts thickness could be assessed.

The edge of each part is measured using one bulb, then the other. In this way, we ensured that only the proportion of the part which is obscured to both eyes is measured. After measuring the areas on screen, designers try to minimize them, especially in sport bikes as they are dealing with very high speeds and rider’s don’t get time to control the bike.

10 Tips to Avoid Accidents While Riding in City: Most Basic But Often Neglected

We, generally, ignore or don’t feel the importance of visibility because it’s easier to develop visibility skills with two wheelers than cars. In fact, many people remove rear view mirrors from their motorcycles. However, root cause of a lot of accidents on the roads is ‘lack of visibility’!