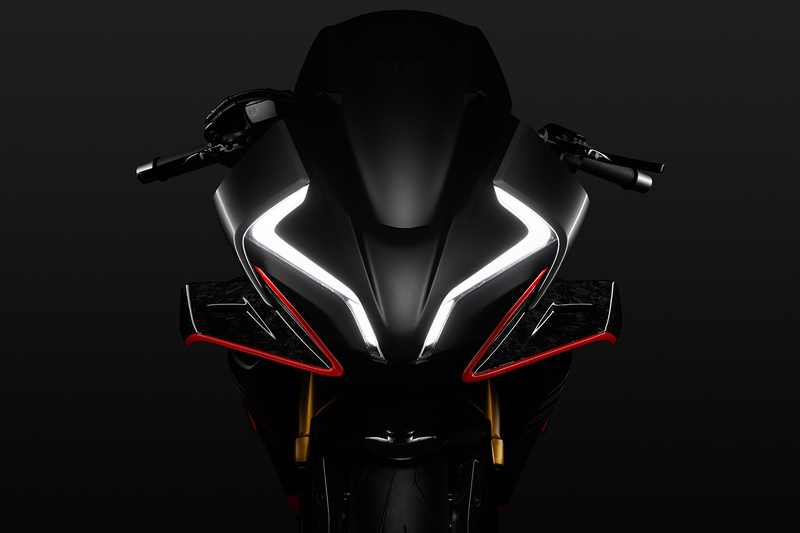 CFMoto SR-C21 spy pics have emerged that reveal that the sportsbike is already under testing. Rumors claim that it may carry KTM’s near 500cc engine…

At EICMA 2021, CFMoto unveiled their stunning SR-C21 sportbike concept. And it has taken no time for the Chinese motorcycle maker to bring the concept to life as a spy-image has been shared by an online portal showing the bike being tested on the roads of China.

Looking at the image, background and rider posture, we believe this is coming from some racing track – which is a good sign.

From the image we can see a heavily camouflaged sportbike similar to the design showcased at the EICMA. We can make out certain elements like the fairings fitted with  aerodynamic wings, the long under-belly and front and rear design similar to the SR-C21 concept bike.

The bike appears to have an aggressive sport riding ergonomics. From the way the test-rider is tucked, we can make out aggressively set rear foot-pegs, big muscular fuel-tank and the low position of clip-on handlebars.

However, features which were on the showcased concept like upswept SC Project exhaust, carbon fiber components, disc covers and the single-sided swingarm are missing on this test-mule.

In place of the showcased upswept twin SC Project exhausts, the bike is fitted with a single exhaust unit on the ride side covered with a heat shield. The overall underpinnings of the bike are more road-centric consisting of a conventional swingarm, single disc brakes on both wheels and standard alloy wheels. The gold coloured USD forks are still present on the prototype.

Certain whispers suggest that the road version of CFMoto SR-C21 Concept will be powered by KTM’s, still to be unveiled, twin-cylinder 450-500 cc engine – however there is no concrete evidence of the same yet.

This near 500 platform had officially been confirmed by KTM’s Stefan Pierer in 2020 (more details).

We think these are the early testing units and the actual launch of the CFMoto sportbike is still way off. CFMoto is already present in India and is known to offer motorcycles at great prices. This makes us hopeful of this sportsbike to come here as well…