Scooters in India have been viewed with some amount of disdain. Take an average Indian family as an example. The parents would often zero-in on a scooter as the perfect ride for their just-about-to-join-college son. But the young lad would throw tantrums, citing taunts and jibes that would follow after his friends spot him on a best-ridden-by-females gearless scooter. 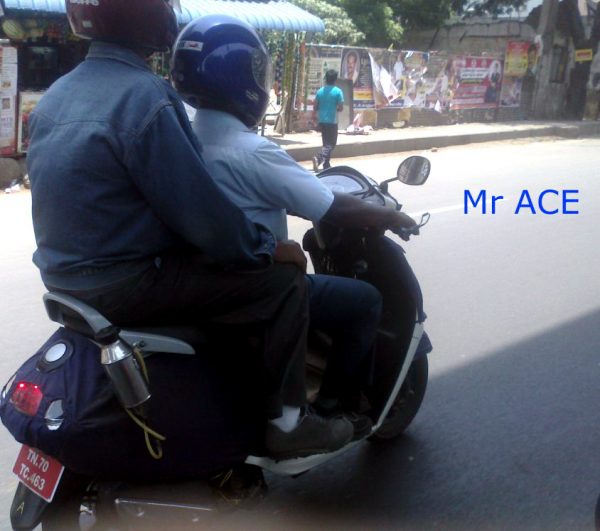 This viewpoint probably arises from the fact that TVS Scooty is the face of gearless scooters in India, and it was targeted originally at the females. Even if one rides a scooter other than TVS Scooty, his description invariably becomes, “He’s that guy who rides a Scooty!”. Some companies have added a bit of masculinity to their scoots, keeping in mind the above mentioned conundrum. 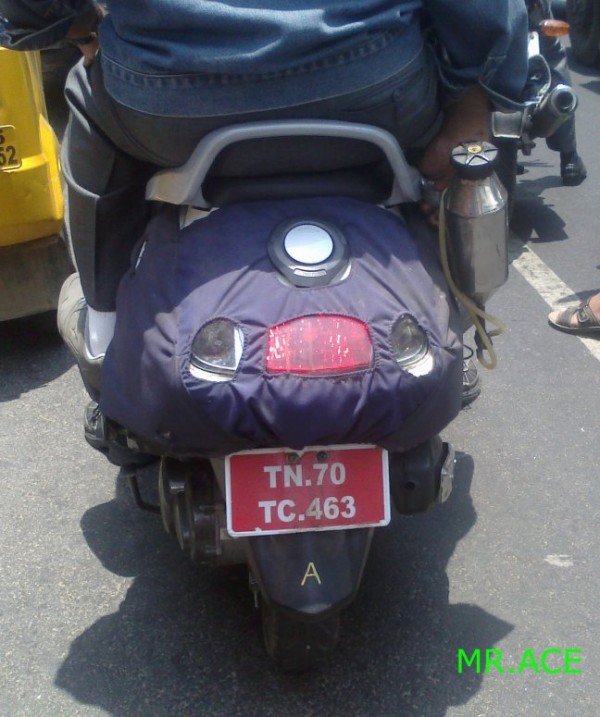 Now, the Original-Big-Daddy-of-Scoots-in-India seems to have hopped on to the battleground! Yeah, it’s probably TVS who has decided to let loose a scoot, specifically keeping the male rider in mind. We shared the first ever spyshots of TVS’ new scooter last month (See Pics) and now we have came across some more spy-pics this time on the testing roads. If you notice there are certain differences in the test mule we spotted and this one which is on the roads testing.

The city where all the action took place was none other than TVS’s lair, Chennai. At a first peek, the scoot doesn’t really seem to be masculine enough, even though it’s considerably beefier as compared to the Scooty and the Wego. It does have a striking resemblance to the Honda Activa, with the rear grab handle and the rear body portion reminding us about that. 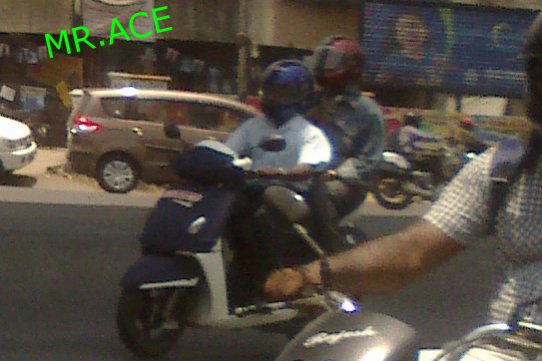 The exhaust tip is different, and the most striking feature is a circular….well it’s “something” above the tail-lamp. Is it a key-hole for flipping open the rear seat? Or is it the fuel tank filler-cap?? Can you guess..? Moreover, look at the fuel filler car which is placed just above the tail lamp cluster.

The front section of the scooter doesn’t ooze much of exuberance. It is pretty much conservative in styling, and the console too looks drab from whatever we can make out after the hiding clothes.

We expect TVS to follow the “sharing-and-caring” approach, and try to soak up profits by creating a common gene pool with their other scoots. But it’s very early to comment anything about the engine displacement of this supposed test mule. What we know is that it will be based on Wego.

If TVS is looking for an assault on the Honda Activa, we do expect this scooter to sport some premium features like front disc brake in addition to the much-regular stuff like electric starter, alloy wheels, side-stand buzzer and a comfortable saddle as well.

Another watchful pair of eyes had spotted a similar camouflaged test-mule in Bengaluru. Looks like it won’t be long before we males have a scoot about which we wouldn’t think twice before riding!