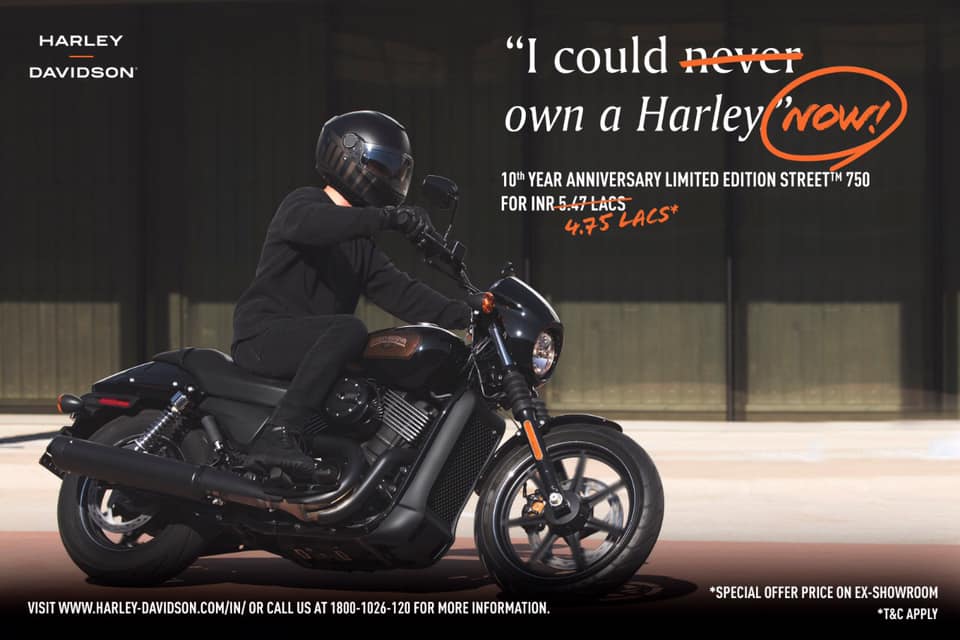 Harley Street 750 offer on the special edition is droolworthy. The best part is that the cruiser complies to the latest emission norms!

Harley Davidson has just dropped a mini bomb! It has announced whopping discount of Rs 72,000 on its Street 750 Anniversary Special Edition.

The limited edition model was launched back in August 2019 and it was actually the country’s first Bharat Stage 6 motorcycle to go on sale. This also means that this edition got the new compliance much ahead of the standard model.

As its name suggests, the Street 750 special edition was introduced to commensurate Harley Davidson’s 10 years of operations in India. The American brand announced to produce only 300 units of the motorcycle in the market.

It was launched at a price of Rs 5.47 Lakh, but Harley is now offering it at a significant discount which allows you to get the cruiser only at Rs 4.75 Lakh – cool 13 percent knocked off from the price! And the best part is that it is not the outdated BS4 version! The updated Street 750 BS6 (standard model) introduced recently costs between Rs 5.34 lakh to Rs 5.66 lakh (here are more details).

In terms of differences, the anniversary Street 750 wore a different color theme with special graphics on the fuel tank and tail along with a 10 year emblem.

It carries the same 749 cc V-twin liquid cooled engine which can produce 60 Nm of peak torque.

Now since you can not go out to get the motorcycle, Harley has asked its customers to connect at its service helpline for more information.