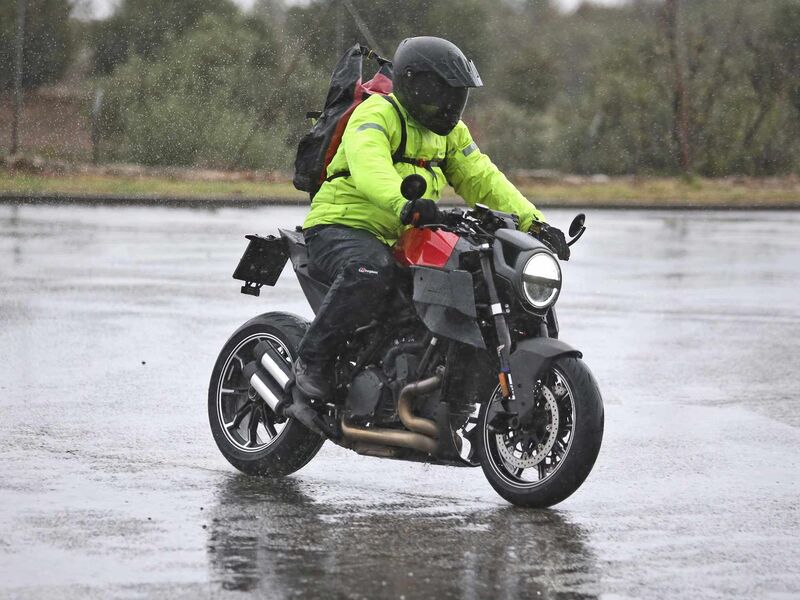 Brabus 1300R launch may be announced in the coming few months. It will be the even-more-menacing version of the 1290 Super Duke…

You read it right! Brabus is entering the two-wheeler world!

Motor Cycle News (MCN) has shared the news and images that the famous Brabus is putting their own twist to the KTM 1290 Super Duke R and the resultant motorcycle will be called ‘Brabus 1300 R’.

To those who have been living under the rock, Brabus is a German aftermarket high-performance automotive tuning company since 1977. They have been tuning Mercedes-Benz vehicles for a long time now and have been creating Brabus editions of Mercedes S-class and G-Wagens among many others.

The very same Brabus has now entered the two-wheeler world and have got their hands on ‘The Beast’ – KTM 1290 Super Duke R.

This move into the two-wheeler aftermarket tuning has not been officially announced by Brabus themselves yet. MCN has shared the information that certain documents and a trademark ‘Brabus 1300 R’ have come to light. The trademark has been registered at the European Union Intellectual Property Office and the date mentioned on the document is of December 2021 and is intended to be specifically used for motorcycles.

MCN further divulges that this bike has been type-approved for road-use and has received the listing that names it as the ‘Brabus 1300 R’ and shows the maker to be KTM.

The approval document further gives us the information that the bike will be entirely based on the 1290 Super Duke R. It will feature the same 1301 cc, unchanged V-twin engine that puts out a whopping 177 HP at 9500 RPM and 140 Nm of torque at 8000 RPM. Furthermore, the dimensions mentioned on the document shows the bike largely will have a similar size.

Continuing the similarities, the WP Apex suspension appears to be the same semi-active ‘SAT’ kit which is seen on the current Super Duke R EVO model.

Certain changes are seen on the document which includes narrower bars – 816mm instead of 843mm – and a 5 mm reduction in wheelbase in the Brabus version.

These images have garnered a large amount of hype on the internet, with some websites and portals touting this machine to be the new Husqvarna Vitpilen 1301.

However, the information from the type-approval document and the fact that the new bike is sporting alloys very similar to Brabus signature style (Brabus Monoblock Z Platinum Edition rims) cements the fact that this bike is indeed the Brabus 1300 R.

When the Brabus 1300 R does enter the market, it will slot itself in the similar limited edition bracket as the KTM Super Duke RR of which only 500 units were made.

In the apocalyptic world of the present, not all is about death and destruction. There are some good news and developments which give us hope that the future has a lot of nice things in-store for us to look forward to.