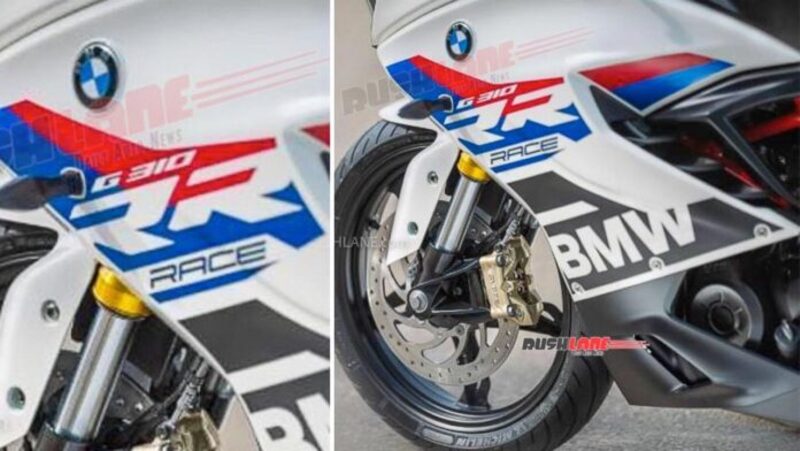 BMW G310 RR launch date could be earlier than 15th July. We have new details sneaking in from a fresh leak of the upcoming 300…

So, thanks to an online portal and two biking enthusiasts, we have, in our hands, a clear image of the front left quarter of the bike revealing the full-fairing, majority of  graphics design, the sought-after BMW badge and much more.

BMW recently posted a contest on Instagram social media site where they asked their followers to tag 3 of their friends, to get a chance to see the first glimpse of the upcoming sportbike from them. And this contest resulted in the leak of the first clear look of the bike.

However, the biggest reveal, as per our understanding, is the White colour scheme leaked from the image. Till now, we were assuming from the latest teaser published by the company, that the G 310 RR will be donning the livery of its big brothers – M & S 1000 RR – consisting of the Factory Colours Red & Blue on White.

But, the new image has proved us wrong. The reality is bigger than our assumption. The new BMW G310 RR colour scheme will be inspired from an even bigger monster in the BMW’s sports line-up.

Looking at the Red & Blue streaks and addition of Black decals spelling out BMW in White, this is the official colour theme of the monster known as ‘BMW HP4 Race’. It is the first bike from BMW which has received Carbon fibre constructed chassis & wheels and weighs just 171 kg putting out a monstrous 215 HP. The HP4 Race is the true definition of a supersport, and is so raw and vicious that it is not even street legal!!

Even the front of the G 310 RR, which from the teaser looked a little different, is reminiscent of the BMW HP4 Race. The two streaks at the front of the fairing that follows the design, is similar to the monster HP4 Race.

BMW is not holding back when they selected the colour scheme and graphics for the new G 310 RR. The heart and the mechanicals of the sportbike might be that of a humble 300 cc motorcycle, but the ambitions and the aura it will exude will be that of a monster that is too wild to keep it on the streets!!

By now we are sure that you know that the bike will be based on the existing Apache RR 310 sportbike from BMW’s Indian partner – TVS Motor. Nearly 95% of the bike will be similar to the current RR 310, other than some feature changes and UI in the TFT instrumentation to reflect BMW aesthetics.

But we have one more thing to add in the form of our Hot Take – It is heavily rumoured and widely accepted that the new BMW G 310 RR will make its debut on 15th of July.

However, looking at the frequency of teasers and all the details that the company have revealed thus far, we think the launch date of BMW G 310 RR could actually be closer – may be a few days away (could it be 15 June?).

If you have any queries on motorcycles, simply #AskBikeAdvice