Rumors are that Bajaj seem to be engaged in developing a bigger and sportier version of Bajaj Pulsar 300cc. If ever that’s happening probably it will give the Yamaha a run for its money as Pulsars are dubbed to be bikes with international features coming at Indian prices circles. But all fingers crossed at this point about neither the features nor the price and don’t know when it will hit the roads. 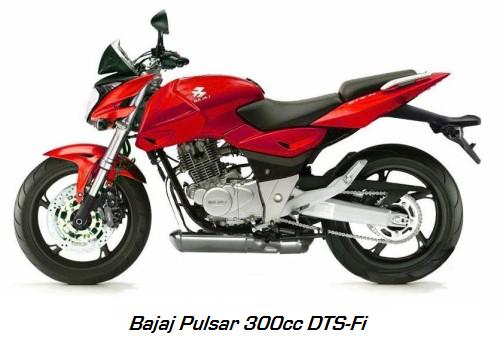 So, as of now the Bajaj engineers seem to enjoy the bike circles talk about their new, yet-to-be-launched newer bike, specifically the high-end Pulsar tweak, the Bajaj Pulsar 300cc. Its talked that Bajaj had Kawasaki give the initial design set up but they are going to develop it indigenously without having any Kawasaki-like looks.

There are also doubts about the front faring and as it’s going to be a 300cc bike that will fit well for racetracks, bike lovers want it to have a sporty looking front. There are some spy photos available and no one knows whether they are photoshop tweaked versions or the concept bike photos of Bajaj Pulsar 300cc. From photos, it does appear that the visor is not given proper attention. It also appears that the bike has a single cylinder and we simply cant wait to know the amount of power a single cylinder bike could deliver. People also expect that the new Bajaj Pulsar 300cc will be having a DTS-Fi engine.

As per the price industry people say that it could be well about the 1 lakh mark. Considering the Indian road conditions its all suspense as to how Bajaj will take mileage into their designing, as because at least we are not so rich to have a tank filled and it gets emptied in a few days’ time while commuting only to office; the 200cc Pulsar is giving just 30-35 kmpl and should this give around 20 kmpl it becomes a white elephant. As to the power it’s still a guessing but one can expect more than 45 bhp.

People from Yamaha and Honda say that Bajaj is not into any making of a Pulsar 300cc or so and it’s just their marketing strategy of hyping about their forthcoming launches, so people talk about the brand and promote it before even the launch has happened.

Bike lovers, especially Pulsar lovers just hope that Bajaj Pulsar 300cc gets due attention with respect to sporty looks, seat saddle, headlamps and also the kick-start option. Not to mention about the 6-speed transmission and gearshift concerns that earlier Pulsars have.

So said, Bajaj Pulsar 300cc can really brighten up the Indian automobile market and Bajaj will take over the  competition by 360 degrees. All we can do is open our eyes and wait for the bike to roll down the Indian roads.