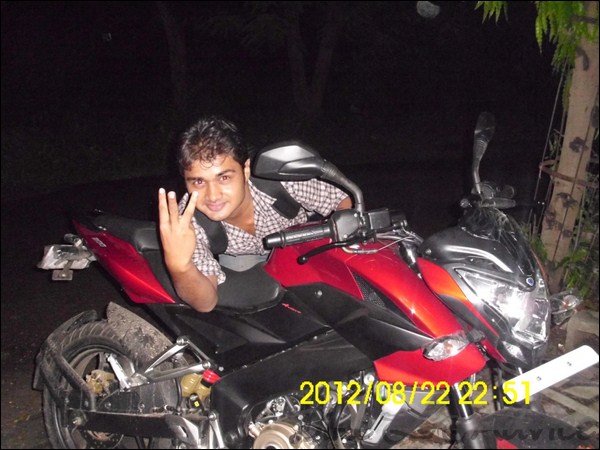 The Fastest Indian resurrects with a vengeance. “Fast…Faster…Fastest..” is what I keep thinking all the time. 7 yrs ago I had my first affair when I was in school. Once we were discussing about our likes and dislikes. On questioning “How would you have anticipated me to propose you?”, she gave a strange reply that was heartbreaking but highly motivating and inspirational.

“I dreamt of you coming on a Black Pulsar 180, my name written on the mask and you wearing sports gear, you stop the bike, and come closer to me, lie down on your knee and say you love me. Then I accept you and we go for an endless ride, at a speed above 100 kmph me hugging and kissing you and holding you tightly.”

Tears came in my eyes, for I knew my dad would never give me a Pulsar and I would never be able to fulfil her dreams. Later that year I saw her with a senior on that same Bajaj Pulsar 180 with bikini head lamps, wolf eyed mask, muscular tank, the bike was looking splendid. I still remember that scene, she was holding her tightly and the scene of them getting airborne on the road.

Faster than any other motorcycle, the moment I waited for half a lifetime. I am on one of the most advanced motorcycle in the country today equipped with latest technology and systems added with killer aesthetics. The Pulsar 200NS. Fast as a peregrine falcon, mean as a vulture and naked as a jay bird.

Aesthetics: Meaner and Naked as a Jay bird!

Yes, the legendary bike makes me proud even while thinking of it. Lets start from the day of purchase. I am “The First one” in the city to own this bike. Imagine, owning a bike which you have just seen on the internet and magazines till date. The feeling was exactly like an arranged marriage where I never saw my partner till the wedding night and just went in to see a gorgeous young girl waiting for me on the bed. 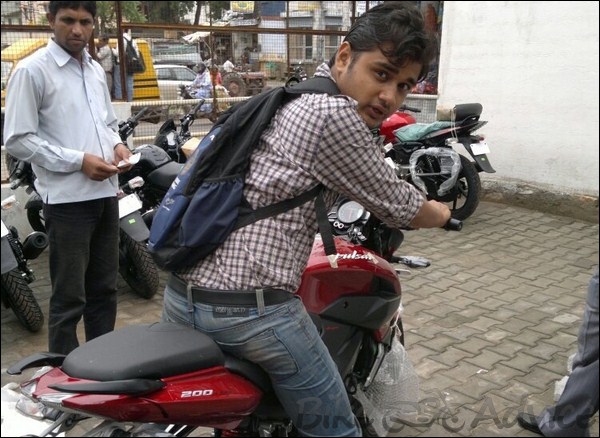 At the first sight, you’ll recall the Honda CBR1000R naked. Slowly when you move closer to it, you’ll feel design amalgamation of a Yamaha FZ (from front), Hero Honda Hunk from side, Yamaha R-15 and Pulsar 135LS from rear and overall touch of Italian bike Benelli. Brakes resemble a lot with Apache RTR 180 but are greater in diameter than them.

It costed me Rs. 98900 on the road in Jaipur. Tall riders rejoice, this one is Bajaj’s gift to you. Minimum height required for a plush riding experience is 5’8”, below which, you have to lean on either side with one leg on the foot peg and another on the road.

The journey from showroom to Ganesh Temple was enough for the bike to introduce me to an enjoyable, faster and comfortable ride, Yes, the sound of the engine would again make you recall the already-placed hooligan KTM Duke 200, component sharing is done here, we all know. Mind you, I have already owned Pulsar 135LS and Pulsar 150 but it was like pressing Shift+Delete with them.

Neither in terms of riding experience, nor looks, this bike resembles to its predecessors. In fact, you would have to look properly on the tank to call it a pulsar. Say thanks to Edgar Heinrich! He’s no more in Bajaj Auto and has gone back to BMW Motorrad from where he had come to Bajaj as the Vice-President of the design team especially for designing this visually arresting machine.

Lets move on to the specs sheet. This powerful machine generates a raw pulsating power of 23.4 Ps making it the sportiest and amongst the fastest motorcycle to pace the Indian roads. The bike also boasts a pulling power of 18.5 Nm. So what’s new in the bike? Yeah, now 3 spark plugs are firing on the air-fuel mixture coming from a 32 mm carburetor. 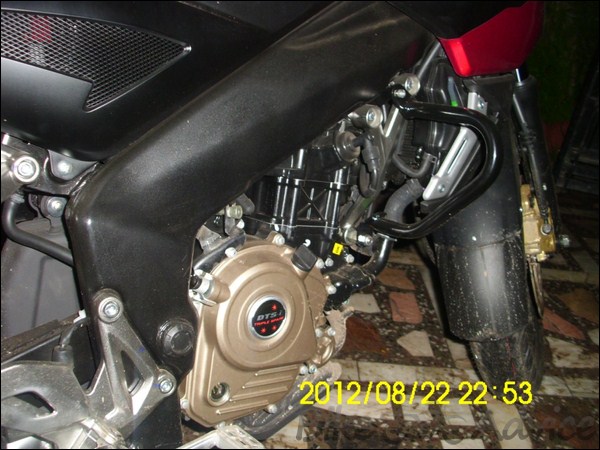 So did we miss Fuel-injection? Four valves have now been incorporated in the lungs of the engine, no compromise at higher speeds. Say good bye to power fading, since this extremely powerful engine is now cooled by passing coolant through passages and then heat is blown off with radiator. Now just oil is not cooled as in Pulsar 220 and avenger.

The bike has got the largest wheelbase amongst all the Pulsars. Ahem Ahem! the big lengthy feeling in the previous bikes is now missed. Clip on handle bars, tubeless tyres, front-rear disc brakes and split-grab rails have been brought forward from Pulsar 220. Suspension is again improved with Monoshocks assisted with gas canister.

First 2000 Kms were the toughest on the road. Extremely difficult to control this machine below 50 kmph. I had to keep a strict eye on the speedometer for it should not exceed 50 kmph. You never know when it exceeds 70 kmph. It runs as if it is born for that. Still I used to be the first on the road, all others with their questioning eyes on the young Pulsar. 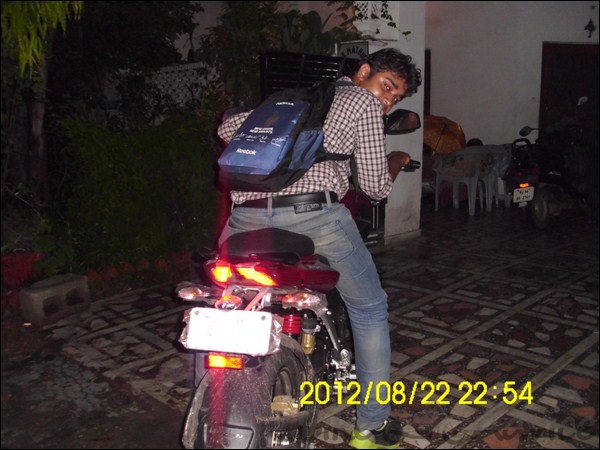 Servicing day was again a momentous. First Pulsar 200NS to enter the KTM-Kawasaki-Pulsar 220 exclusive service center near Rambagh Palace. Needless to say, the bike arrested crowd anywhere and everywhere it was parked or just stopped. Motul 7100T oil was recommended by many bike experts and the same was then used.

Now the time came to take this bike on the track. Road was no more a connection between destinations. It was now a play ground and a race track for the young hot blooded Pulsar 200NS. Covering Jaipur to Ajmer (140 kms) in just more than an hour was a no mean feat. 142 kmph was achieved at 10000 rpms. Don’t call me a fagged, I was actually loosing confidence after that.

Else the bike would have exceeded that. Left R-15’s, Karizmas, Pulsars and most of the 2 four wheelers behind. Honda CBR 250 and KTM Duke are the major antagonists for this bike. Its gives up infront of Kawasaki Ninja ofcourse. I seldom notice the bike complaining me of tiredness. In city I could perfectly exploit the acceleration power of the bike. I know I can leave any vehicle behind if I want. 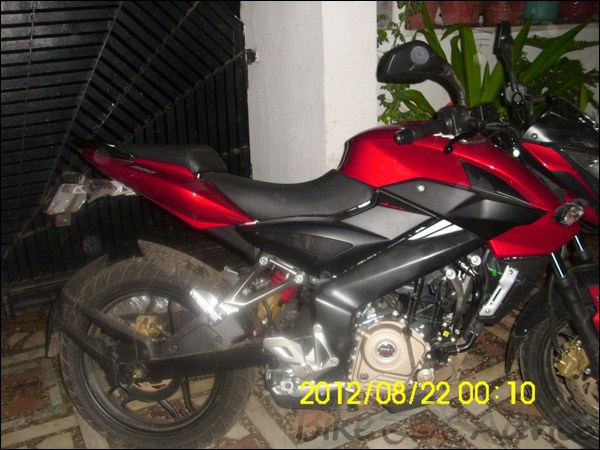 Braking is the best thing anybody will notice in this bike. Speed, acceleration apart, a bike has to be safe. Bajaj understands Bad boys like us. That’s why petal disc brakes have been fitted on both front and rear wheels. Why petal? Petals on disc brakes increase the surface area assisting the cooling. 2 calipers have been used in the front one. So 60-0 back in less than 4 sec.

That’s the best ever seen on a bike, even better than Kawasaki Ninja. Attention here! Pls head towards MRF dealer after getting the bike from the showroom and spend Rs.4500. Get the tyres replaced so that you can enjoy the braking. Else this is a killer machine and will take you from earth to heaven in less than a second.

Eco-friendly and pocket-friendly: It loves you back!

23.5 Ps of power. Are you getting ready to loose your pocket at petrol pumps? Don’t worry. This bike looks like a hooligan but at the heart of it is a triple spark engine. It takes very good care of your pocket as well as mother earth. The ignition system ensures that every drop of fuel is properly burnt and that a single pinch doesn’t go wasted. So more power is now achieved from less fuel and emission is almost negligible. 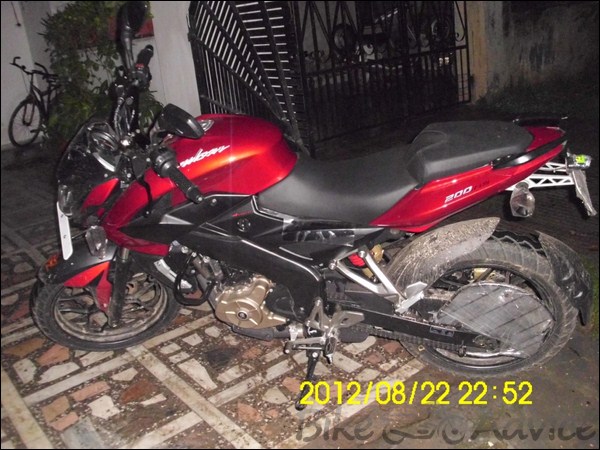 The bike gifts you a fuel efficiency of 35-38 kmpl. So spend Rs.2 for a kilometer. At almost same power and speed, CBR250 gives you 25 kmpl. You’ll find the silencer missing now. The bike has got an underbelly exhaust which if goes wrong will make you spend only Rs.3000 unlike Pulsar 220 for which you’ll have to keep Rs.8000 in the workshop and for other bikes it might exceed 10 grands.

Handling and Ergonomics: Perfect Tourer too!

This bike excels in comfort and handling too. With 3 times more lateral stiffness and beefed up chassis, you can ride hours and hours on the bike without even getting a hint of ache in any body parts. While riding, your back will now be straight. Ughhh! Don’t think you’re looking like a commuter. Look at your feet.

They are bent for resting on the foot pegs which are towards the end of the engine. So now comfort is without compromising sportiness. Handles are clip-ons, thus retaining the sportiness. Yes, you’ll feel you are on a big bike, sitting higher than others but you have to bend a little as soon as you cross 100 kmph. Things you’ll miss.

Affirmative! Somethings I wish I had in this legendary machine. Self cancelling indicators are heavily missed atleast if you have ridden a previous Pulsar. Switch on the indicator and you won’t know until someone reminds you on the road, “Boss, shut down the indicator”. Secondly, the bike now switches completely off once the engine is stopped, be it by using kill switch or key.

So, no illumination until engine is turned on. Thirdly, every time the bike falls, the leg guards are sacrificed. Yes guys, just a fall might cost you Rs.103 for either side of the leg guard. Pls be very careful and ensure the bike doesn’t fall. Rather, buy 3-4 pair of leg guards with the bike itself because one you meet with accident, leg guards are sure to be replaced. Sometimes a welder has to assist you if the bolt is broken inside.

Verdict: So much for So less! 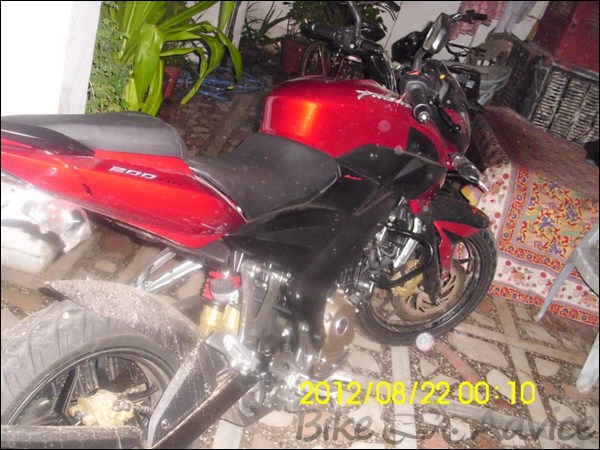 You are paying less than 1 lakh for a bike with highly fuel efficient Triple spark, 4-valve, liquid cooled, SOHC engine with 23.5 bhp power. No compromise in quality, mind you. The radical new engine is now inspired from European bike maker KTM.

So the traditional engine of Pulsar that rusted within 2 years is no more existing. This radical new engine now ensures quality, economy and performance. Best buy for all, commuters, young buyers and racers. Yamaha R-15 once arrived alone. It still does but now at last. Pulsar 200NS laughs on it!