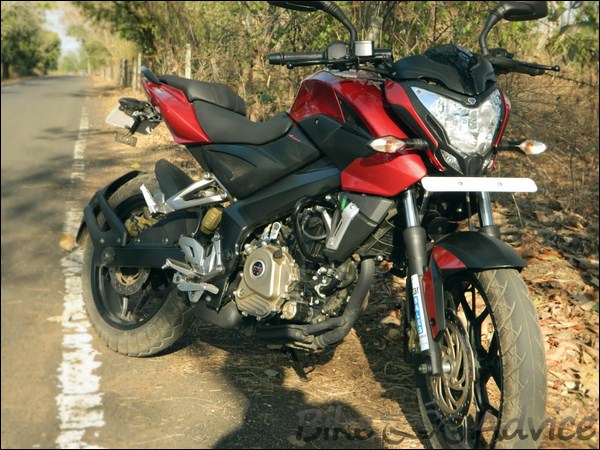 Remember the day when you sell your old bike and order a new bike? It’s like a transition period when a caterpillar turns to a butterfly (pretty lame, I guess). The anticipation of the new bike and the painful time when you don’t have anything. No bike and which means, No Heart. 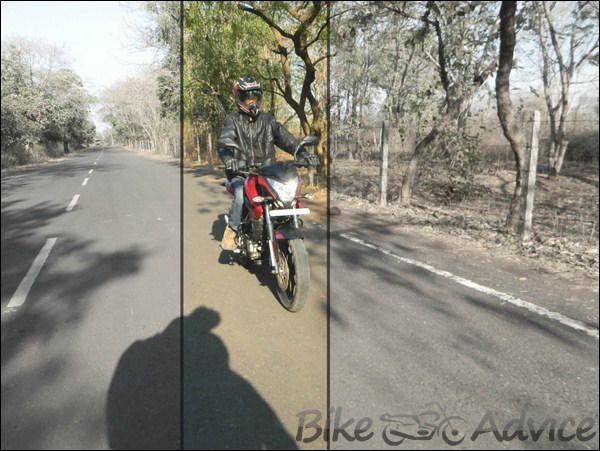 My first bike which I and my dad used to share was the Hero Honda (back then) Super Splendor. Sure it wasn’t the Megatron of the Transformers world but still it was like a world to me. What more would a teenager want than his own bike? Then came the time when I got the chance to choose my mean machine and I was greeted with a big confusion right at my face.

KTM Duke 200 or the Bajaj Pulsar 200NS? Pretty horrifying, right? It was like choosing between Android and iPhone. Surely the KTM is state of the art machinery but its hefty price and fuel consumption was too big a downer. Even if money isn’t a constraint, the overall package was much better to be found on the Bajaj. To this day, I feel bewildered about how am I saying anything this good about the Bajaj Pulsar. But to be honest, with this Naked Sport, the blokes at Bajaj Auto pulled it off.

I remember about my childhood days when I used to collect pin up posters of my favorite bikes including the likes of Suzuki B-King, Honda CB1000R and Yamaha FZ1: All naked bikes, obviously and indeed so when I took a close look at the Bajaj 200 NS it seemed that some of my dreams did come true.

The CB1000R inspired headlight looks ravishing and brutal just like the Decepticon (Yes, I am a transformers fan), the pressed perimeter steel frame along with the chiseled tank cowl gives it the premium sports bike feel.

The split seat design is gorgeous and comfortable too. The engine unit just demands attention. The fuel knob is integrated beautifully on the frame. The only problem with the looks is the tail light which if the bike is black looks strikingly similar to the Pulsar 135LS which is pure stupid and saddening. All the materials used in the bike look as well as feel premium. The console is clean and has an interesting blend of digital and analog meters. 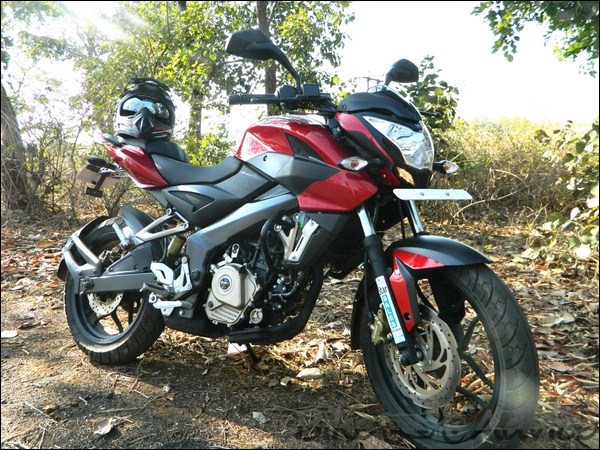 The rear tyre hugger looks alright with the stock tyre but if you choose to replace the stocks, it’s better to remove the hugger. The indicators add to the overall aesthetics of the bike. Underbelly exhaust reminds me of the intervention of KTM in Bajaj and the sizzling red monocross with nitrox is the thing that completes the bike.

The name itself suggests the engine capacity which is 200cc boasting a 4-valve, single cylinder, liquid cooled and best of them all, world’s first triple spark engine controlled by an ECU chip which gives the spark at different intervals and operating at 6 gears. 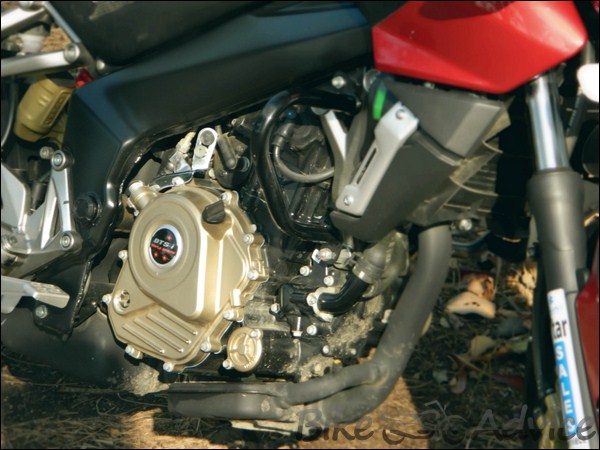 Honestly, it doesn’t sound like Bajaj at all but thanks to the almighty, it is true and joys of joys that the bike is nothing less than a rocket without wings on a road. The nitrox gas charged mono shock, the adjustable swing arm with shell shape adjuster, front and rear disk brakes by Bybre (Brembo) which are 280 mm and 230 mm respectively having a petal disk with floating caliper mechanism, clip-on handle bars.

Back lit switches are the things which you would shout out to your friends, bragging about your bike and believe me, it’s worth it. The level of detail is so carefully carried out that even the key you would hold out every time to start the bike would remind you about the perfection with which Bajaj has made the bike.

Now keeping the brochure aside, what does it actually feels hands-on. It is a killing machine. It’s a machine which constantly tries to kill you, something you would try to keep away from your family for their safety. It’s brutal. It’s epic and insane at the same time. 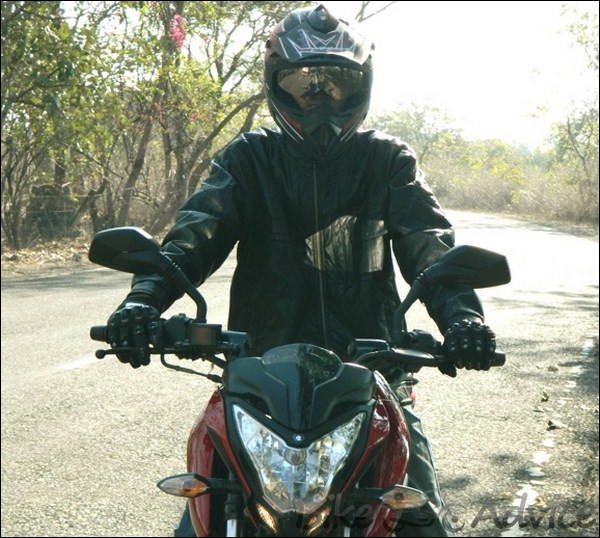 I don’t know if it’s even possible but most of the time you would be terrified to death and smile like an idiot at the same time while driving the bike cause it offers sheer pleasure. The bike is tall and so the riding is upright. The clip-on handle bars are adhering to the racing aesthetics and precise handling. Whereas otherwise, it has a fairly long turning radius.

It’s like when you test drive the bike, it won’t be the one who is tested. Frankly speaking, it’s not for amateurs or beginners or (normal living beings). But yes, it is amazing to handle no matter what. The power delivery is none like any-other bike boasting the same engine capacity. The bike won’t limit you at any gear cause you’re the rider; your choice to make entirely. 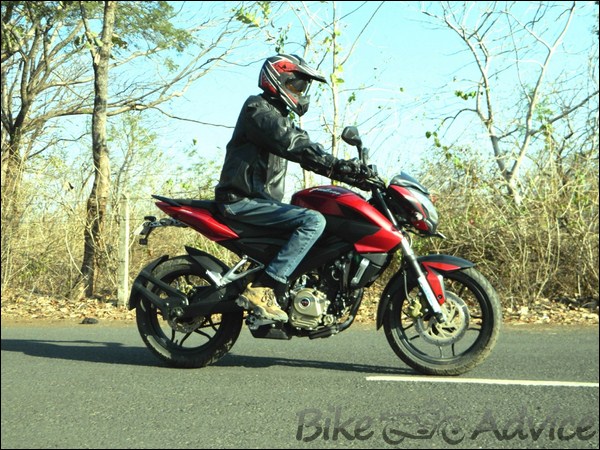 Since the fueling is marvelous there is no limiting of the throttle irrespective of your gear or speed. The bike just accelerates in any case whatsoever. Their won’t ever be any sign of vibrations below 6k rpm and the engine experiences absolutely no load while running in 6 gear at very low speeds (say 30 kmph). The achievable top speed without Speedo error is 134 Kmph. 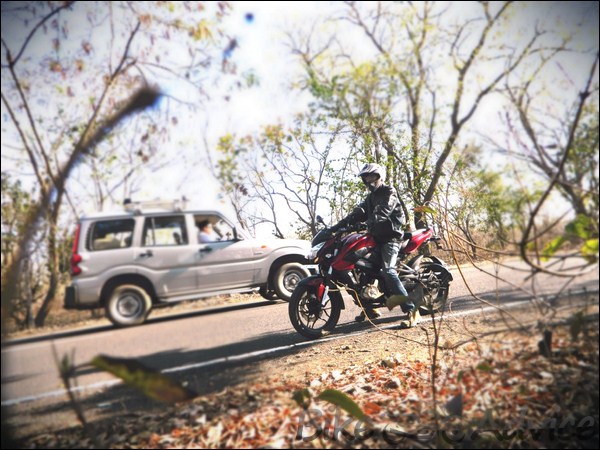 The brakes are top notch and very responsive and good at its bite. The front petal disk brake of the NS is shaped in a wavy curved form which helps it to produce a brilliant sound on application. The bike uses a radiator to keep itself cool which is a first among the whole generation of Pulsars. Seats are really comfortable and there is enough room for the rider to maneuver his stance while taking on corners and sprinting through the traffic. 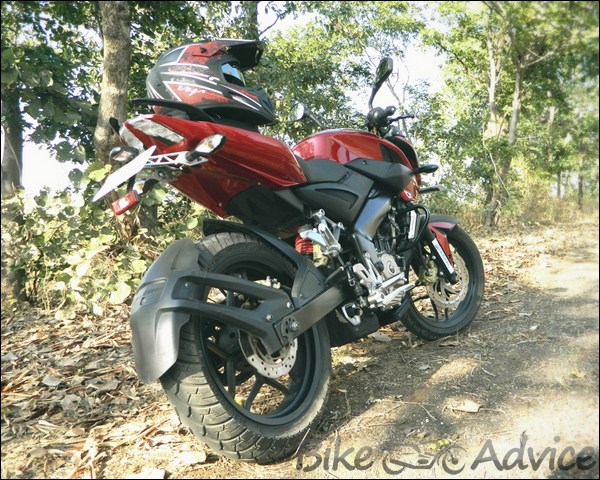 The under belly exhaust helps reducing and maintain the center of gravity. The sound produced by the exhaust is pleasing to me but it’s just a matter of choice and liking. The NS is surely Naked Sport but it has many qualities of cross dirt bike just like the BMW Multi-Strada which is quiet evident as NS was the last venture of Edgar Heinrich right before he left Bajaj Auto’s and joined the BMW Motorrad group. 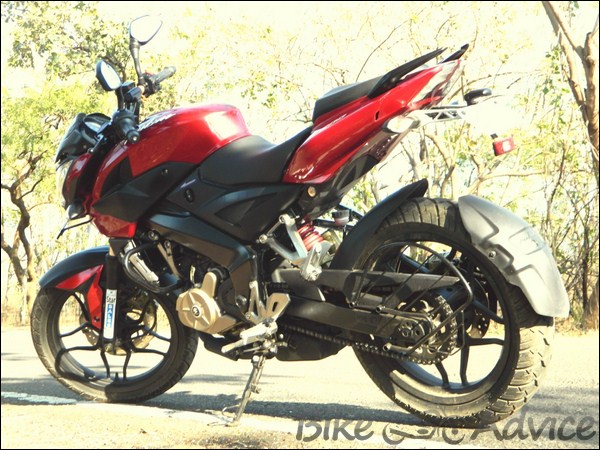 The ground clearance is high, the rear tyre performs well in both terrains (on and off road) as well as in corners but lacks that confidence while braking and the seating is high. The Fuel Efficiency which I managed to take out is, 50 KmpL(Highway), 38 KmpL(City), 44 KmpL(Overall) which is good for a 200 cc bike.

The Thorns of my Rose

The bike is not perfect and so there is big room for improvement. For instance, the fuel indicator is bonkers all the times, the knee recesses are high, the choke lever is mysteriously hidden beneath the perimeter frame, ample space is present between the seat and the tank where you could poke your finger through which is NOT good. 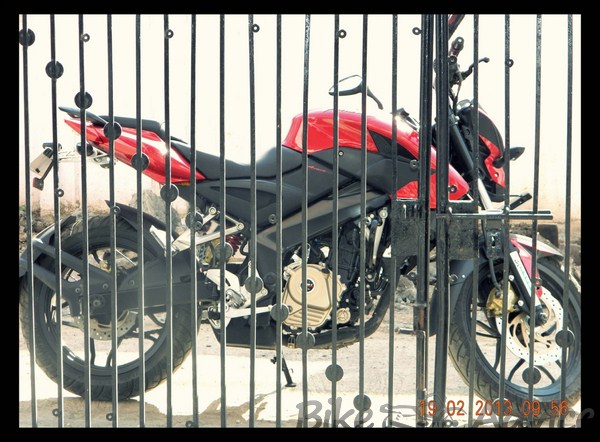 The turning radius reminds you of the perimeter of the Large Hadron Collider which you might have to traverse to turn, the rear tyre hugger looks fatty as compared to the aggressive design of the bike, the side mirrors are just good to look at but don’t quiet work all the time and finally, where the hell is the center stand? 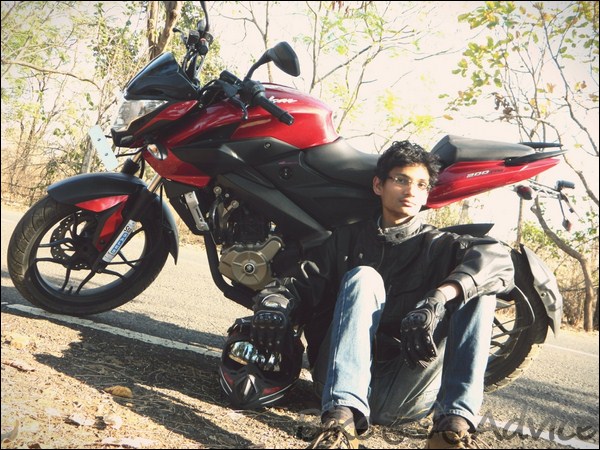 Go buy it. If you like naked bikes with absolutely no respect for your life and want to threaten yourself to death every now and then, then this right here is the bike for you. On a serious note though, the Pulsar 200NS is yet the best Pulsar and with the current price tag i.e, its best in its segment as well as overall performance. 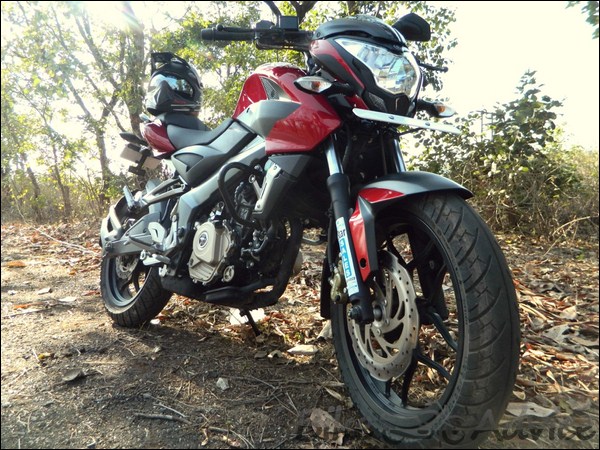