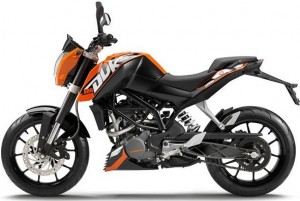 According to news reported by Business Standard based upon the annual report of KTM, Bajaj Auto, India’s second largest two wheeler manufacturer and KTM, Europe’s number 1 two wheeler manufacturer are now developing a twin cylinder engine platform. Both the company are also working on a new motorcycle which will have engine capacity as high as 375cc and this could be the highest cc engine developed indigenously for two wheelers in India after Royal Enfield motorcycles. The twin cylinder engine is being developed at Bajaj Auto’s R&D center at Akurdi, Pune.

In its annual report, KTM states, “Together with Bajaj, KTM is consistently working on implementing a global product strategy. We have already developed new small-engine street motorcycles in response to the rising demand for small, agile bikes for the urban area. Bajaj Auto managing director Rajiv Bajaj is on the supervisory board of KTM Power Sports AG. Both companies are actively looking at Asian countries, such as Malaysia and Indonesia, for joint expansion and common distribution. In future, we would in particular like to attract customers in the emerging markets with this new product, since they will represent one of the most important growth drivers of KTM in the next few years.”

It is to be noted that Bajaj Auto and KTM are jointly developing so many engine platforms. The first engine developed by this alliance is 125cc Duke which is doing wonder in European market for KTM. KTM has posted 22% growth last year on the back of 125cc Duke success in European market. The 125cc Duke engine capacity was expanded to 200cc in order to cater certain market such as Asean region and India. Bajaj Auto and KTM are also working on 350cc Duke which is scheduled to launch in 2013.

Further, Bajaj Auto will also utilize the new platform of engines in its Discover and Pulsar brand of motorcycle.  As we have seen that the Pulsar 200Ns lower part of engine is based on KTM Duke 200. Bajaj-KTM alliance is surely going to benefit both the company due to shared engine cost and distribution network.  We hope to see better Pulsar, Discovers and Duke in the upcoming days.