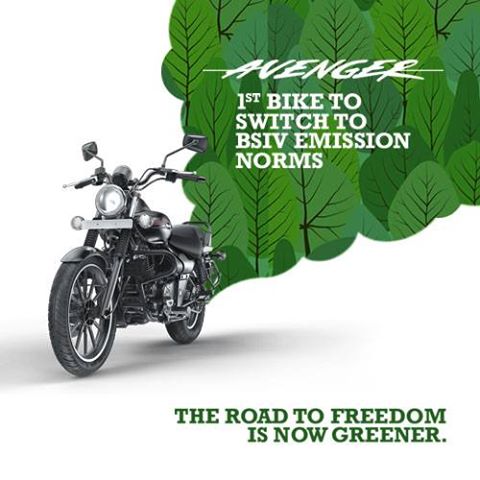 Post Hero, Bajaj is the first manufacturers to start upgrading their existing line-up to comply with BSIV emission norms. The manufacturer has upgraded the Avenger family for now but it is not clear whether they mean the entire range or just the 220 cc version. Also, raises hope of the Pulsar 220 to be upgraded soon.

Bajaj launched the new Avenger family motorcycles in October 2015. Not only did they bring a 150 cc entry level variant but also expanded the 220 range into two characters. The Cruise 220 for the chrome fanatics and a more sombre looking Street 220. The bike though has finally been updated to comply BSIV emission norms which will be mandatory for all manufacturers in India to comply from April 2017.

The Avenger Cruise 220 and Street 220 borrows the mill from the Pulsar 220 which in turn is one of their largest selling ‘big Pulsar’. The image shared by Bajaj on its social media channel does show the Street version but we see no reason why the entire range will not be upgraded. That’s not all, this also raises hope that the Pulsar 220 will be BSIV compliant!

Now spy pics have emerged of the upcoming update to Pulsar 220 after Rajiv Bajaj talked about new 2017 Pulsar models. However, there had been no hints of BSIV compliance. We expect an official announcement for the Pulsar 220 to be made very soon. Apart from this the Pulsar 180 too has been spied in an updated format.

Now the Bajaj supremo did say that the new 2017 Pulsars will get performance updates as well but word on the exact extent has remained confidential so far. The Pulsar brand has been known to boast of bringing new features to the respective segments in the past and this time too they can pull up a surprise.

Well, we have our fingers crossed!