The Auto Expo fever is all over the nation as all the bike and car lovers are rushing to get a glimpse of their favorite cars and bikes. The Auto expo hasn’t yet wrapped up and there is great news coming our way for the Auto Expo 2014. The news is that the organizers have decided to extend the duration of next auto expo by as much as 2 days. The extension still need to be finalized and it is amid speculation at this point of time but this decision surfaced up amid all the chaos from the crowds attending the expo over mismanagement.  The organizing committee is contemplating to extend the next auto expo upon the increasing interests of automobile enthusiasts. 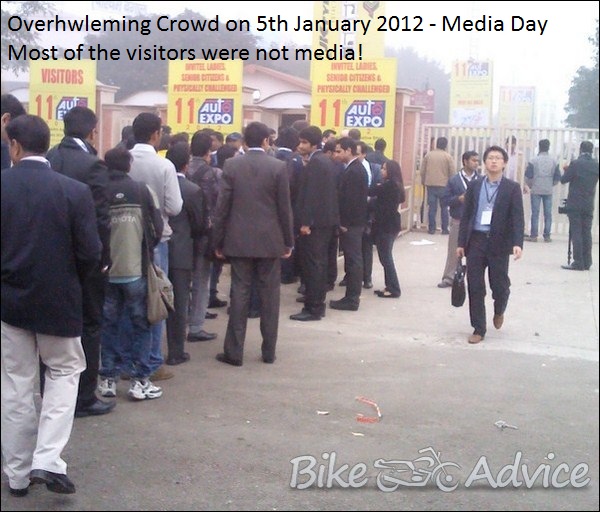 The organizing committee’s chairmen Rajiv Kaul was of the opinion that the committee is looking to extend the fair by one to two days. He also said that the final decision as regards extension would lie with exhibitors as extension would mean increased cost to them.

He was also of the opinion that one day should be reserved for media with no extra passes on that one day. The 11th auto expo is organized by SIAM (society of Indian Automobiles Manufacturers), CII (Confederation of Indian industry) and ACMA (Automotive content manufacturing association). Despite of presence of such big names in the organizing committee, crowd management remained a challenge and thus this proposal has surfaced up.

The organizers said that the crowd management is one of the hardest things to do and thus they have taken some steps like putting a cap on the visitor count and reducing the exhibition space by almost 10,000 sq mts so that the visitors could walk freely without creating any sort of a chaos. Eventually it turned out that the remedies opted weren’t just good enough and thus we may see the expo going on an extension of couple of days next time. Well we hope that the organizers and the exhibitors come to terms with this extension and we get to see more of this amazing event.