I am an engineering student from Lucknow and I daily commute to my college and back to my residence which is nearly 20kms (overall). Earlier I used my Honda Activa (2005 model) to traverse the distance but from past few months I was facing a lot of operating problems from it so I was forced to take it to the mechanic once every fortnight due to some or the other reason. 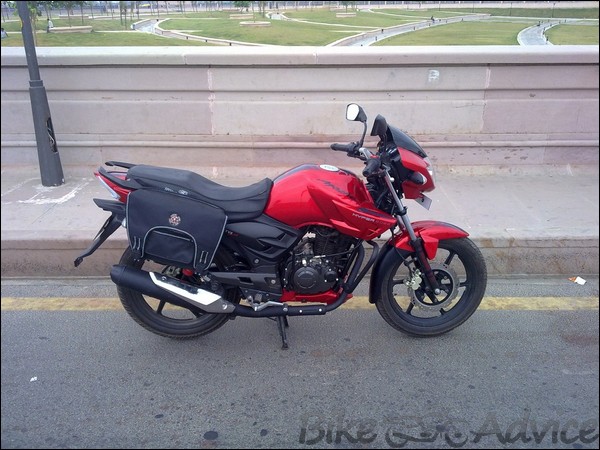 Many a times I also had to drag it all the way on foot due to engine failure for nearly 2-3 kms which aggravated the problem. My parents were seeing all this but their faces only showed sympathy but they spoke nothing. I expected them to ask me about my problem because I myself did not want to ask them for a new vehicle directly. 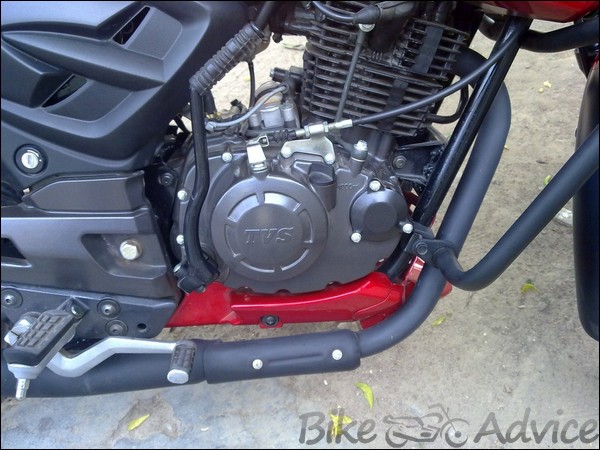 It was morning of 23rd April 2011, I was studying and my mom came and kept her soft hand on my shoulder and in a voice full of affection and sympathy she asked me, “Beta, 25th ko Tumhe jo Bike chahiye le lete hain”. In a moment I was full of excitement, surprise and emotions. I was not having words to answer her. (As 25th was my Birthday, My parents had mutually decided to gift me a bike on that day) I answered her,” Just 2 days are left, how can we get a bike on that day itself, it will take time i.e. Selection, booking, delivery etc). 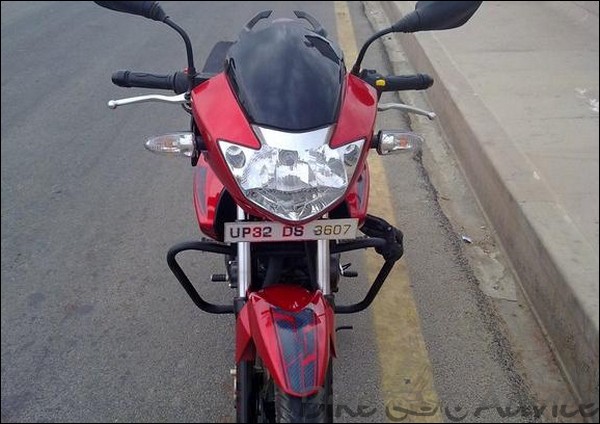 She answered, “sab ho jayega, bas tum soch lo ke tumhe kaunsi bike chahiye” and then she went. Following this, I was only thinking about bikes. I had already decided my budget- around 75k. So, I was left with a series of 150-160cc bikes to choose from which I have already mentioned above.

I decided to visit the above mentioned bike showrooms on that day itself. I personally was biased towards CBZ Xtreme new visually upgraded model about which I knew on the same day from BikeAdvice.

I went to the nearest Hero-Honda dealer and came to know that the New CBZ-Xtreme was not available and only New Hero Honda Hunk was available. I was sure that I would wait for the CBZ Xtreme even if it takes a month or two but to my surprise the showroom people told that minimum of six-seven months the bike would take to come to their showroom after RTO clearance. 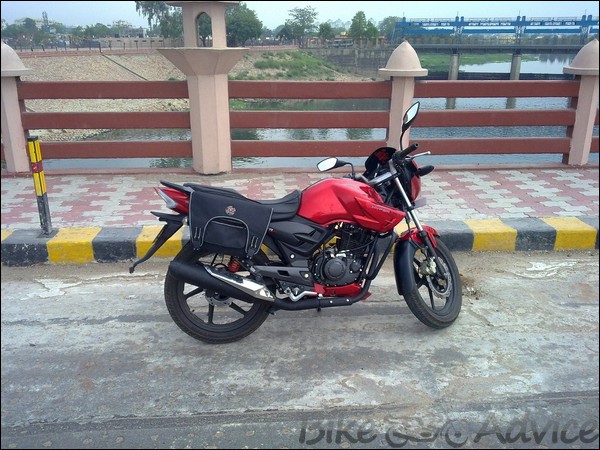 My hopes were shattered. I knew I had to go for the remaining options available. I personally did not like Hunk therefore did not go for it. Later that day, I had visited almost all the showrooms of the bikes mentioned above except TVS because it was farthest from my house. While I was on my way to visit the final showroom.

I had shortlisted my choices – 1) Yamaha FZ, 2) Bajaj Pulsar but when I entered the TVS showroom, my eyes were centred on this hero- Apache RTR-160 Red. I asked my dad too, which bike has caught his attention and he also focussed his vision on the same. We confirmed the prices and went back home.

After seeing the Apache, my priorities were altered as- 1) Apache or FZ, 2) Bajaj Pulsar. Now, I had to decide between Apache and FZ. I was particularly very impressed by the monocross suspension of the FZ and its Fuel tank look and the massive MRF Zapper rear tyre but on the other side I was impressed by the overall look of Apache and its Rear-Disc brakes as well as their Roto-petal type. 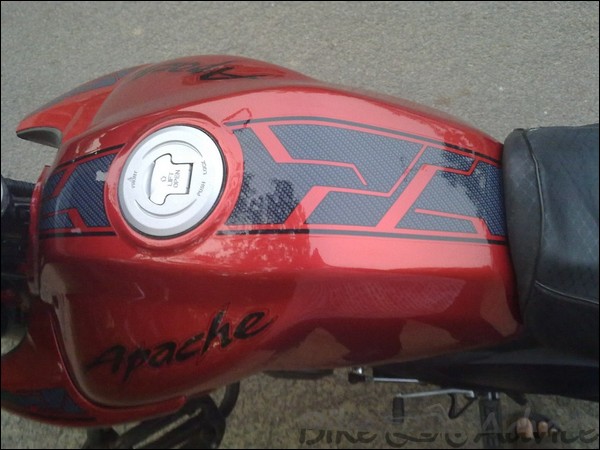 I had personally only driven a Splendor NXG earlier so I had no experience of driving these masculine machines. Other than this, I preferred Apache because I did not like the pillion seat of the FZ. It was too short in dimensions. I also knew that FZ delivered a lower mileage than the Apache and as I had to go regularly to college on this, I knew that a little mileage advantage would be good.

Also Apache’s tank capacity was approximately 4 litres greater to FZ so I could travel more with a single top-up. Also ,the next day I read Shreejith’s review of the Apache RTR – https://bikeadvice.in/tvs-apache-rtr-hyperedge-ownership-review-shreejith/ which further made my decision stronger. I was too much impressed by Shreejith’s review and I would thank him greatly for helping me in my decision. 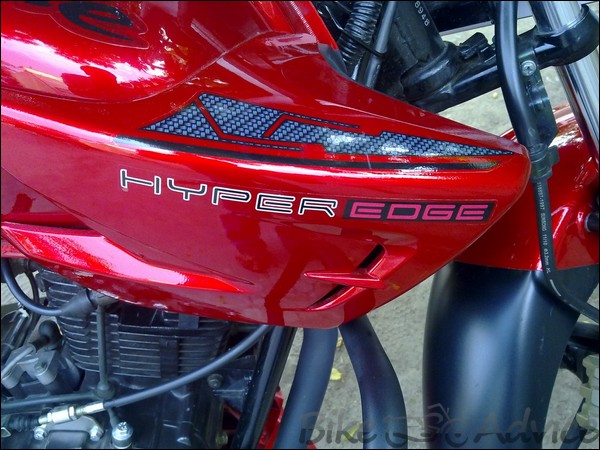 I seriously recommend all bike enthusiasts to visit bikeadvice.in regularly for updates and reviews which are just fabulous and helpful for new-comers to this biking world like me. On 25th April, it was my Birthday and also the most happening day of my life. It was a regular college day so I went to my college and after attending the lectures, I celebrated my birthday with friends in a nearby restaurant.

It was 5 p.m. by then and I quickly rushed back home because I had to go to take my Apache from the showroom which was already bought by dad the same day and all the formalities were done. I went to the showroom and saw my dazzling red Apache standing with a tag line of “ Sold to Mr.Vishesh Phadke” written on the nameplate. I was too happy seeing that as it was the first vehicle registered on my name. 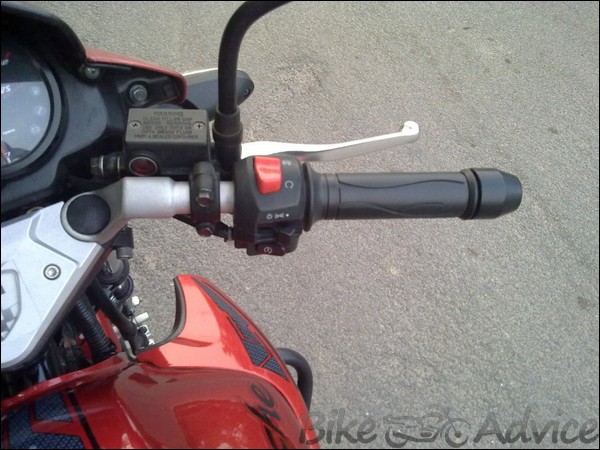 While riding it for the first time, I was bit nervous whether I would be able to drive it to my home which was 10kms away. I also needed to get it filled with fuel. I drove it to the nearest petrol pump at a very low speed of 15kmph (lol). After that, I started driving to my destination. I took some throttle and saw people around me staring with wide eyes. As It’s a red bike, one look is assured. 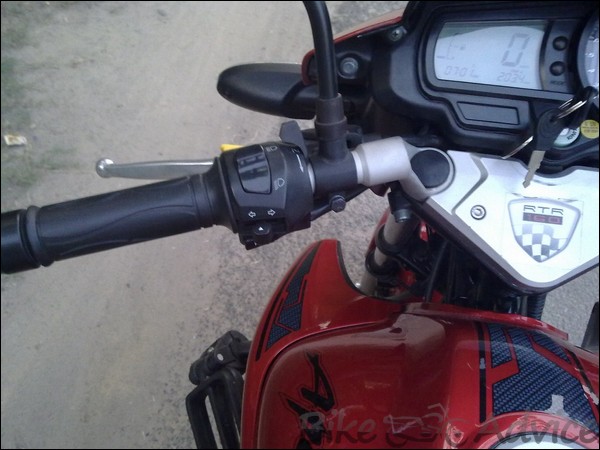 I was very proud as “Earlier, I used to look at new bikes with such eyes and this time my bike was being looked at”. On my way, I was impressed by the sharp braking and perfect handling of the bike. Also, on the way once a stupid driver tried to overtake from the wrong side in a cheesy-thin space and spoil my day but the sharp brakes applied at the right time made me drive it smoothly and comfortably and made my first ride hassle-free. 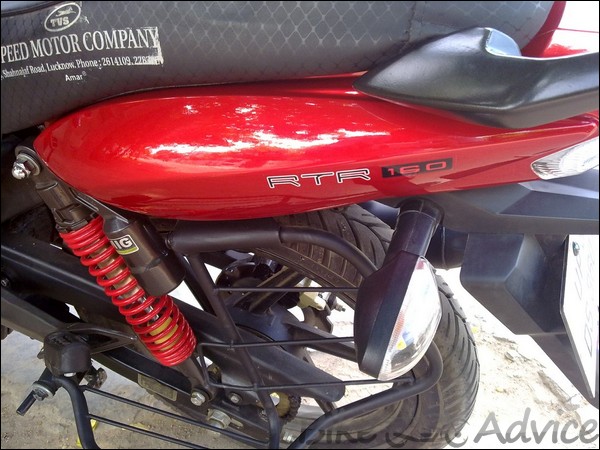 The rear disc brakes are sufficient to make you stop quickly but more than 60% of the total braking power is delivered by the 240mm roto-petal discs in the front. The double-horn was also loud enough to alert drivers who are just busy in themselves and ignore people coming from back. In a few days, I completely discovered the full capability of my bike. 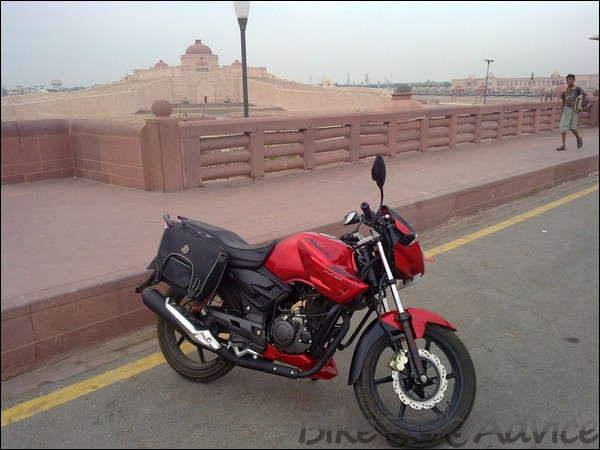 As written in the bike manual, I never took my bike above 50-52 kmph till now. As I Write the review, the Bike has completed 600 kms. I had taken the bike for first service on 29th May (1 month and 4 days later to purchase date). The Service persons were good-natured, asked me for any problems faced till now and also drove the bike themselves before the service to take note of any particular problem.

They asked me whether I wanted a coat of Teflon applied on my bike. I agreed and when I came in the evening to collect my bike, I was very happy to see it perfectly cleaned and coated. Riding it was also smoother than before. Particularly, the gear-shifting was much better and smoother after the first service.

Some Problems which I faced and noticed till now 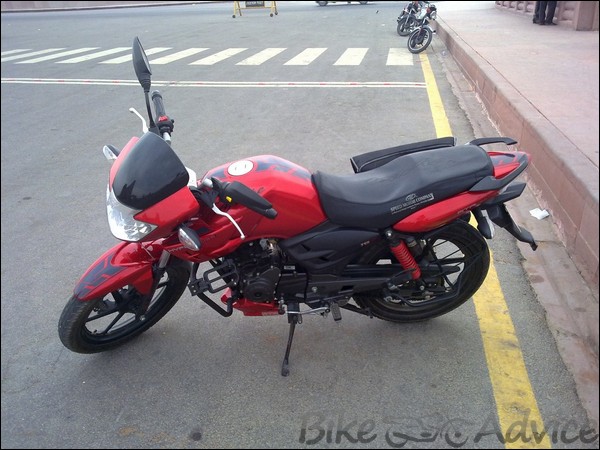 No bike is perfect according to me, every bike has a set of human errors which can be neglected at times, following are some present in my bike.

Till now, I have not taken my bike on long drives or tours but I know that it would be surely tour-happy. The Digital Speedo on this bike is the best available amongst all other competitors available showing top speed attained, shortest 0-60 time and 2 trip metres. I feel an adrenalin rush whenever this bike is above 45kmph. 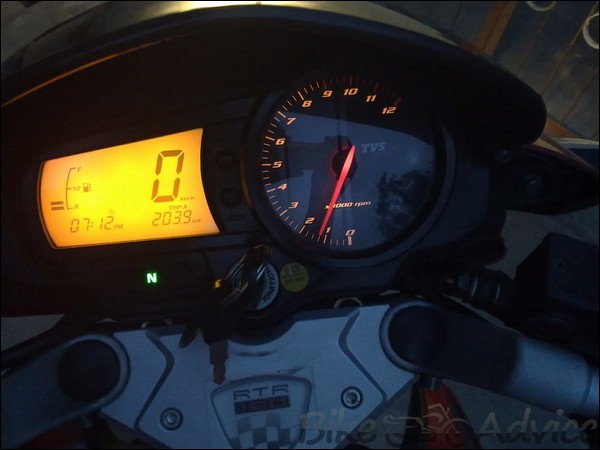 The sound of the engine is just breath-takingly awesome. The Ignition sound and the engine cutoff sounds are also perfect. In addition to this, whenever you are driving and someone from opposite side of road wants to cross the road in front of you, he thinks twice before doing so in hurry because he sees this macho and pauses.

That scene, makes you smile and you get an automatic grin on your face as when the king passes, the pathway is made free from intruders. Mileage that I received in the first 500 kms: 42-45 kmpl which is good in run-in period. I know that this would increase after 1000kms and second service. 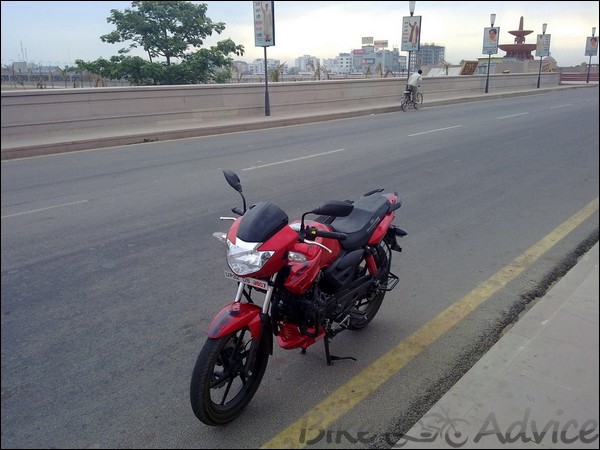 People would always keep on bringing out flaws of your bike and compare it with some other bike but just be silent and don’t feel low as you know that you are not an idiot and have selected your bike after lot of research works, surveys, spared your lot of time in visiting showrooms as well as put your heart and soul in finalizing your choice and finally also waited a long time for the delivery (I didn’t face this problem, my RTR was delivered to me the day I paid the amount).

Finally, I would recommend all bike enthusiasts to consider this bike if they want a decent mileage, fantabulous performance, accurate braking, desired handling, stupendous cornering and massive raw power and all this in a budget of 75k then. Apache RTR Hyper-Edge is the only bike for you to get an “Edge Over The Competiton”. 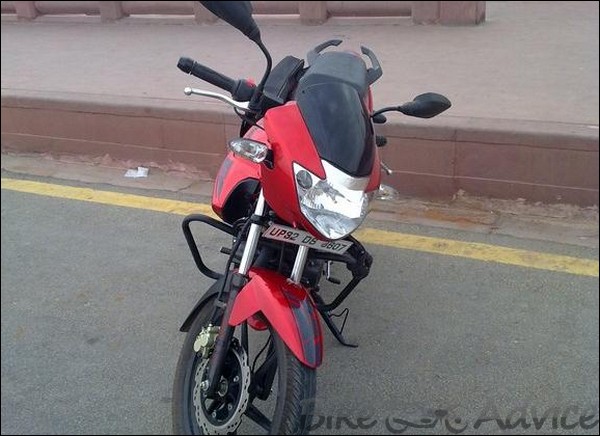 If I had been allowed 500 words more, I would have included my views about the technical specifications as well but I think I am still very immature in this biking world and many seniors to me have given sufficient words of detail on the technology in several other reviews available on this website so the RTR technology is not new to anybody I assume. Thanks a lot to BikeAdvice for allowing me to make my words reach thousands of riders in our nation.