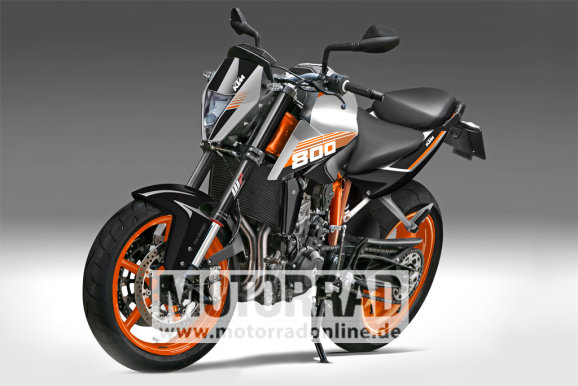 KTM is on a roll! Ever since they were infused with cash by the folks at Bajaj, the Austrian brand has been building some really great products. Photo of an upcoming twin cylinder 800 cc Duke (expected) has been caught by the folks at Motorrad Magazine. The article was shared on the internet by Adventure Rider which shows the bike all camouflaged.

The twin discs upfront are shod with Brembo callipers while the exhaust is the traditional canister type and not an underbelly one. The V-twin 800 cc motor can be expected to churn out more than 100 PS of power which would put it in tandem with its global competition. 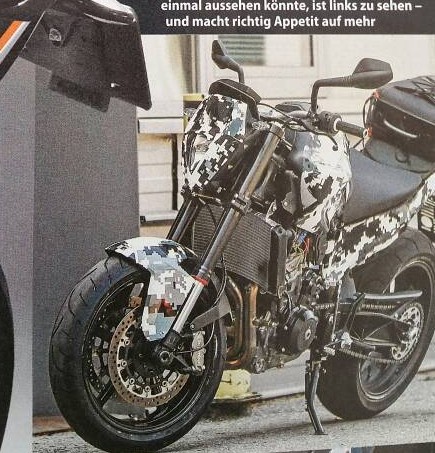 The spy shot reveals that the new bike will continue to utilize the familiar Trellis frame. The split seat are in the shape of the family line and the same can be said about the head lamp console, which matches with that of the Duke 690. ABS too can be kept as standard as is visible in the test unit. The alloy wheels are in black and the overall body seems to be edgy as the Dukes we have known and seen so far.

KTM may also decide to launch a special R variant of the bike to give it the touch of family legacy like that of the Duke 690. Expect parts like WP suspension (upside down in the front and mono at the rear) to be standard.

While we are not certain whether KTM will be seeking any help from Bajaj for its series production, we expect that the production will take place only at KTM’s Austrian factory in the town of Mattighofen. So fans in India, sorry but it might be quite a few years before this bike gets unleashed on Indian streets.

Expected to be launched in the market in 2016, KTM might just be holding this bike for a global unveil at the EICMA scheduled to be held later this year. However, all this is speculative and things may get delayed as per Steven Peifer’s wish!