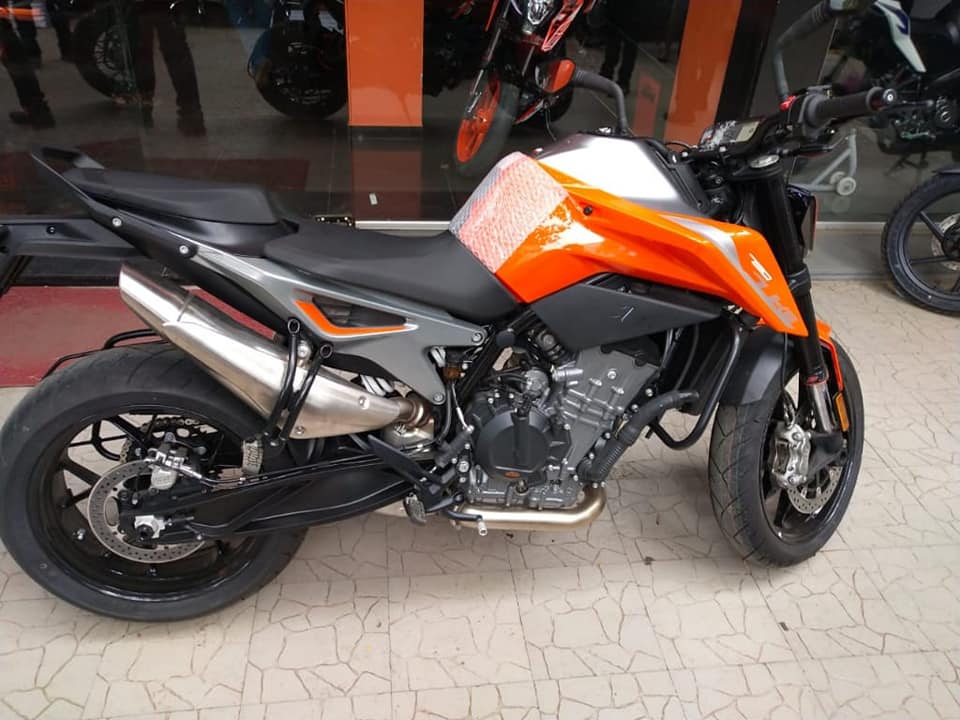 790 Duke pics India – All the indications that the Mid-sizer is heading to our shores and very soon, as it seems…

After a eye-grabbing debut at EICMA 2017, KTM 790 Duke has been a ‘teasing’ story for India. After the motorcycle was spotted with temporary Karnataka number plate and saree guard, the ‘scalpel’ has been spotted at a Mumbai dealership in a latest. Add to that we saw an authorised KTM dealership ‘soliciting’ enquiries on 790 Duke from prospect buyers on Facebook.

Though, there is still no official word from KTM India yet but it appears to be almost a confirmation that the motorcycle is finally entering India and it could be soon – may be by this month itself.

Since it is not making this naked roadster in India, KTM is expected to bring it via the CKD (Completely Knocked Down) route and it can then assemble it at any Bajaj’s plant here.

Just like any other KTM out there, the 790 Duke packs in tonnes of features and looks brilliant. The signature split LED headlamps inspired from the 390 Duke, all-LED turn indicators, LED tail lamps and high-mounted side exhaust can be seen on this 790 Duke. The TFT LCD display, also seen on the 390 Duke, will offer a host of settings along with Bluetooth enabled smartphone connectivity. It will be offered with electronic aids such as a two way quick shifter, cornering ABS with Supermoto mode and multiple riding modes- sport, street, rain and track.

This middle-weight naked bike is powered by a 799 cc, parallel-twin liquid-cooled engine capable of producing 103 HP and a peak torque of 87 Nm. The engine comes paired to a 6-speed gearbox with slipper clutch. Suspension duties are taken care by 43 mm, non-adjustable USD fork and a pre-load gas-assisted monoshock. Braking will be handled by 300 mm dual disc brakes at the front and a 240 mm single rotor at the rear, with dual channel ABS offered as standard.

Coming to its physical attributes, the 790 Duke has a seat height of 825 mm, ground clearance of 186 mm and a fuel tank of 14 litre capacity. With a dry weight of 174 kg, the sport-naked motorcycle is one of the lightest bikes in its class, second only to the Triumph Street Triple.

After its launch in India, 790 Duke will directly compete against Kawasaki Z900, Triumph Street Triple, Ducati Monster 821 and the Suzuki GSX-S750. Since KTM is new into this genre of CKD mid-sizers, nobody has a lot of understanding about its pricing strategy, but something around 8 Lakh ex-showroom could be a good starting point.