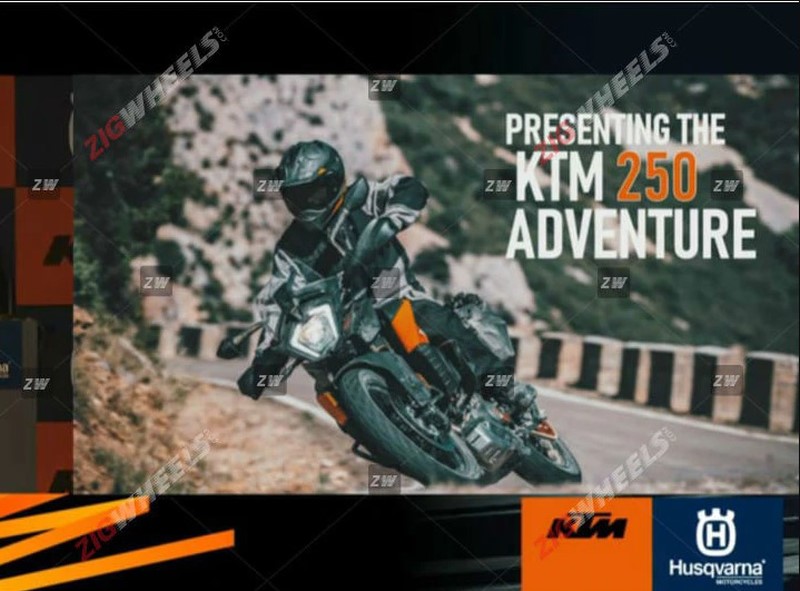 KTM 250 Adventure launch expected in the coming few days. It will give ADV lovers chance to own a capable ADV at prices significantly lesser than 390…!

The KTM 250 Adventure has easily been one of the most-awaited motorcycles in the country this year. However, it looks like the wait is finally going to be over, as the company intends to begin the festive season with a bang!

The Austrian motorcycle manufacturer was caught testing the bike on our roads multiple times. In a latest, we have the spy images of the bike’s launch presentation that have leaked online. KTM is expected to reveal the final launch date very soon.

However, it will be around ₹30,000-₹35,000 more expensive than the 250 Duke 250, with which it will share its engine. For the extra premium that it commands, the 250 Adventure gets 390 Adventure-like styling and TFT instrument cluster unlike the LCD screen on the Duke 250. However, unlike its elder sibling, it misses out on the LED headlight, as it settles with a halogen headlamp setup.

It will come with a trellis frame, inverted front fork, rear mono-shock, and disc brakes at both ends equipped with a switchable dual-channel ABS.

As mentioned above, the 250 Adventure shares its engine with the Duke 250, which is a BS6 compliant, single-cylinder, fuel-injected, 248.8 cc motor good enough to churn 30 PS of peak power at 9,000 rpm, and 24 Nm torque at 7,500 rpm. The engine will be mated to a 6-speed gearbox to handle the transmission duties.

When it gets on the Indian roads, it will see the Royal Enfield Himalayan along with the new BMW G310 GS as its competition, which recently went on sale in the country. It remains to be seen how well will ADV lovers receive it against its rivals.