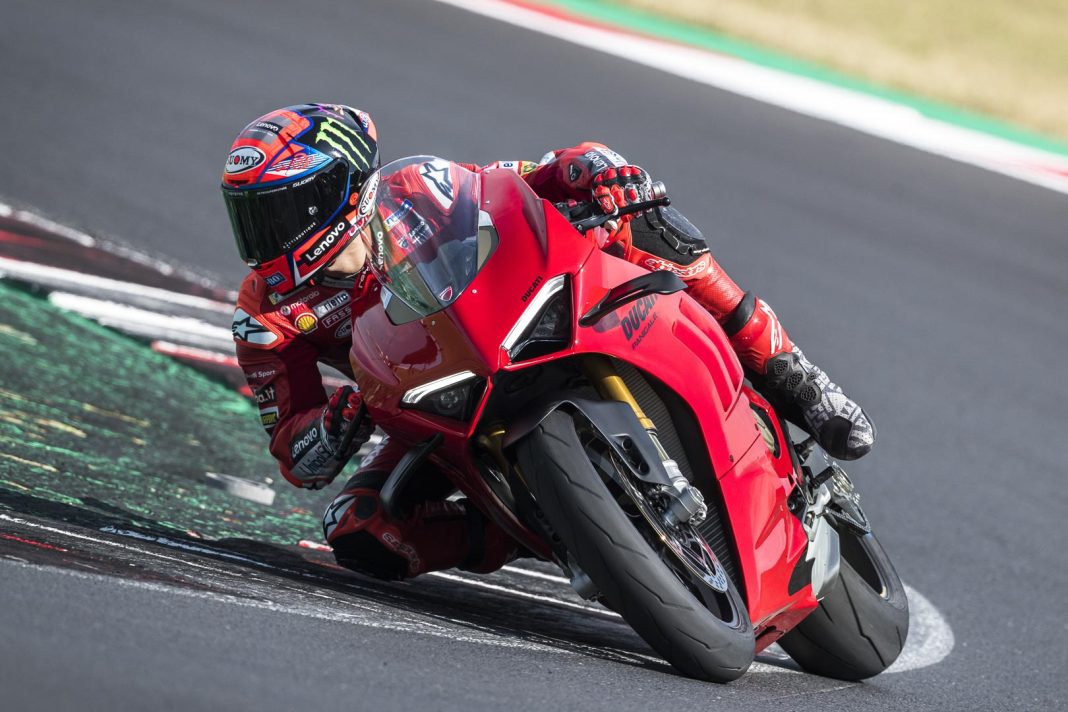 Ducati has unveiled the 2022 edition of their king of supersport – the Panigale V4 and Panigale V4S – with more significant improvements in Aerodynamics, Ergonomics, Engine, Chassis and Electronics. This means pretty much everything has been bettered.

Ducati boasts that their Panigale family represents their maximum expression of the continuous exchange of information and technology from their dominance in the world of racing to the production bikes which has made the new Panigales even faster on the race track while being more intuitive and comfortable for a wide range of sport riders.

This has been achieved through their major focus on improving the Ergonomics of the bike with an aim of improving the control of the bike during the demanding track sessions. Compared to the 2021 version, the tank shape has been re-styled along with changing the profile of the seat to help the rider to better control the bike (while moving around that seat), while turning (cornering) and under heavy braking.

The 1103cc Desmosedici Stradale engine, derived from their MotoGP beasts, has evolved with the introduction of dedicated technical elements allowing an increase in power along with instant throttle response. The new engine has an updated lubrication circuit coupled to the new oil pump which reduces power absorption.

The improved engine has been mated with a new gearbox that provides a lengthened ratio for the first, second and the sixth gear making it more racing oriented and suitable for use on the race track.

The performance of the new Desmosedici Stradale engine can be further improved with their racing exhaust systems contained in the Ducati performance catalogue adding 12.5 HP – bringing the total value to 228 HP while increasing the torque figures to 131 Nm. The new exhaust system can be added to the more compact full racing version, already available in their catalogue, and is made completely of titanium by the famed exhaust manufacturer Akrapovic.

The bigger, more aggressive brother – the Panigale V4S, is equipped with the new Ohlins NPX 25/30 Electronically Controlled Pressurised Fork utilising pressurized cottage damping system derived from that of Ohlins racing forks which is minimising the risk of oil cavitation compared to traditional models.

The new fork has 125 mm travel (5 mm more than the previous) which can adopt softer settings improving the smoothness of the response and grip in critical conditions on the road while offering Racing Plus that improves the feeling in the most demanding braking sections on the track.

Ducati’s most specialised weapon – The Aerodynamics – has now been further improved with the integration of more compact and thinner double-profile design wings which has increased efficiency while keeping the same downforce values – upto 37 kg at 300km/h.

Furthermore, the lower part of the fairing features redesign extraction sockets which improves the cooling system resulting in better engine performance, particularly during track riding. The improved aerodynamics has also resulted in the look of the bike being revamped adding a further dose of aggression to it.

All these significant improvements have been showcased through their special testing on the Vallelunga racing track in Italy where the 2021 Panigale V4S went head-to head with the new 2022 editions – resulting in the 2022 Panigale V4S thrashing the 2021 editions by nearly half a second.

Their Unprecedented Graphic Design conceived by Ducati Centro Stile includes the black logo applied to full red fairings, the double fabric saddle (two-tone on the S version) and the red tag on black rims (only on the S version).