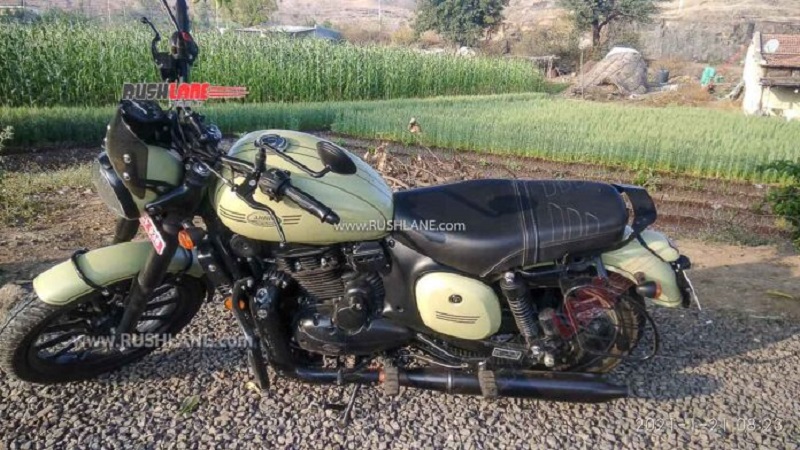 2021 Jawa Forty Two launch could be expected sooner. It will be a funkier version of the model and gets a lot of cosmetic changes…

Mahindra owned Classic Legends is actively testing its classic motorcycle – Forty Two on Pune’s streets, ahead of its launch in the coming months. The motorcycle, which competes against the likes of RE Classic 350, Honda H’ness CB350, etc., is being updated for 2021.

The new version is seen with a lot of changes, as it now gets blacked-out alloy wheels, instead of the regular wire spoke wheels it earlier had. The changes are not limited to that, it also gets a black paint job done on other parts like exhaust pipe, front and rear suspension set up, black headlamp bezel, and turn indicator housings.

Apart from that, it also gets blacked out engine and gearbox set up, instead of the regular chrome setup of the existing model. This definitely makes the motorcycle look more modern.

Rumor: YEZDI to Debut With 3 Models; Cheaper Than JAWA

The 2021 version of Jawa Forty Two also gets a single-piece grab rail for the pillion, along with a new stitching pattern for the seat and a short flyscreen. The existing customers of the bike often complain of the uncomfortable seat for the pillion. However, it remains to be seen if the company is also working on fixing it.

On the mechanical front, the motorcycle is expected to retain its BS6-compliant, single-cylinder, liquid-cooled 292cc engine that currently produces 26.5 bhp of power and 27.05 Nm torque, unless Jawa has a surprise ready for us with that bigger 335cc Perak’s motor. Its launch could be expected in the coming few months…