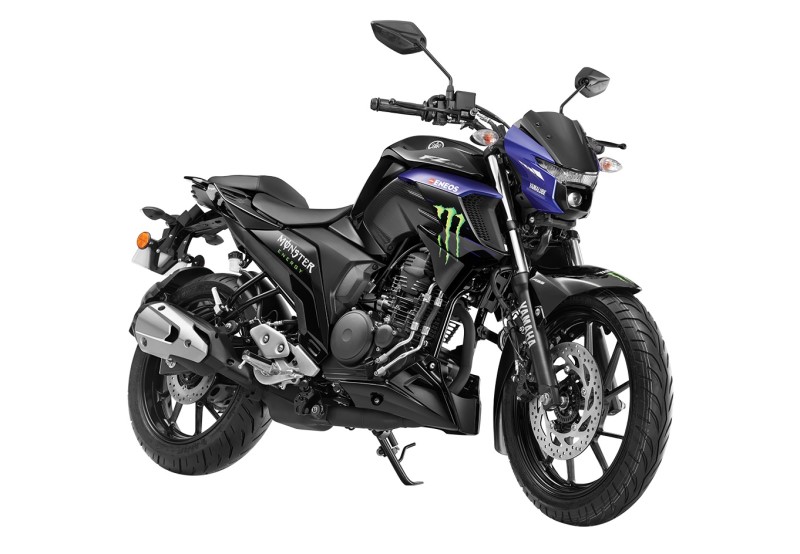 2021 FZ25 MotoGP price is Rs 2000 more than the standard variant. This is a cosmetically enhanced version that looks great…

Yamaha has just announced the launch of the Monster Energy MotoGP Edition of its naked streetfighter the FZ25. This new model has been introduced as a part of the Jap’s campaign “The Call of the Blue”.

Like the earlier time, the 2021 FZ25 MotoGP Edition has MotoGP branding on the fuel tank and side panels. You also get the Eneos branding on either side of the tank. At the side panels, the special edition FZ25 bears the logo of Monster Energy drinks.

The bike gets blue color only at the air ducts near the tank and on the sides of the headlamp cowl. The rest of the body gets a deep dark tone which emits an aggressive look.

Although it is a limited edition release, the FZ25 Moto GP edition packs the same BS6 compliant, air-cooled, SOHC 4-stroke single-cylinder 249cc engine. It produces a power output of 20.8PS at 8000rpm along with a peak torque of 20.1Nm at 6000rpm.

At that price, the MotoGP edition is Rs 2000 costlier than the regular FZ25. It must be noted that Yamaha recently slashed the prices of its quarter liter model by almost Rs 20,000. For some reason, Yamaha isn’t offering it in th premium FZS25 trim.

Yamaha NOT to Launch New R3 in India This Year

Yamaha has announced that by the end of July 2021, this bike will be available throughout India. It will also launch similar special editions of other models in the lineup.