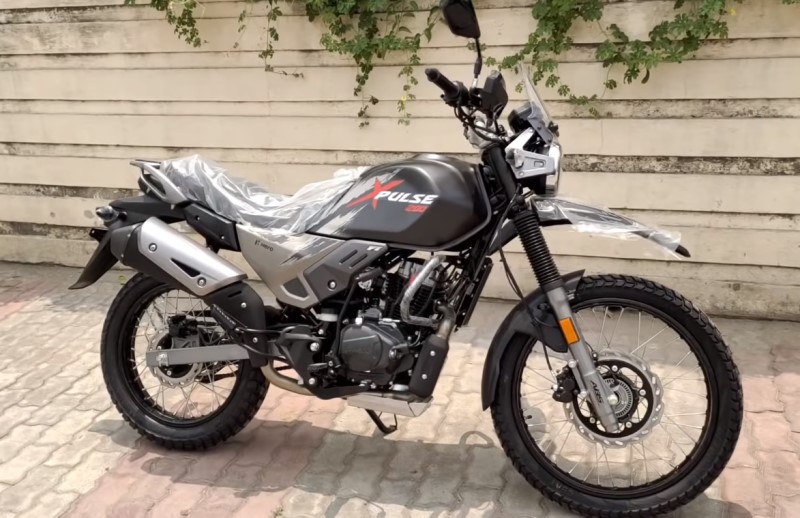 2020 Xpulse 200 launch very soon; will come with a reworked exhaust and a new oil cooler apart from other changes in this BS4 to BS6 transition.

All you ADV fans, here is some good news for you! The much awaited Bharat Stage 6 compliant version of Hero Xpulse 200 is ready and has now started reaching dealerships. This gets confirmed by its spotting at some dealership in the country. A Youtuber has shared a brief preview of the motorcycle which highlights the cosmetic changes it gets.

There is this addition of a new oil cooler and it is placed vertically in front of the engine. It was not on offer on the older Xpulse. Another change is that the exhaust pipe now flows from under the engine; it was routed from its sides in the older iteration (see pic below). This probably is because of the big cat con that the motorcycle now gets in order to adhere to stricter emissions. And precisely because of that the engine underbelly plate has also been modified. There is a minor design change to the exhaust canister as well.

In terms of the engine, Hero has already revealed that the new Xpulse 200 BS6 churns 17.8 bhp of peak power and 16.45 Nm of max torque from the same 199.6 cc single cylinder engine. This is a minor power and torque drop from the BS4 variant.

All the other ADV aspects of the motorcycle continue to be on offer – like the large 21 inch front tyre, high ground clearance, knobby tyres, spoke wheels etc. There are five colors on offer.

If you were waiting to buy the motorcycle, it will soon reach you (if it hasn’t already). Expect it to cost around 1.10-1.15 Lakh ex-showroom. An official announcement and the price revelation should be soon…