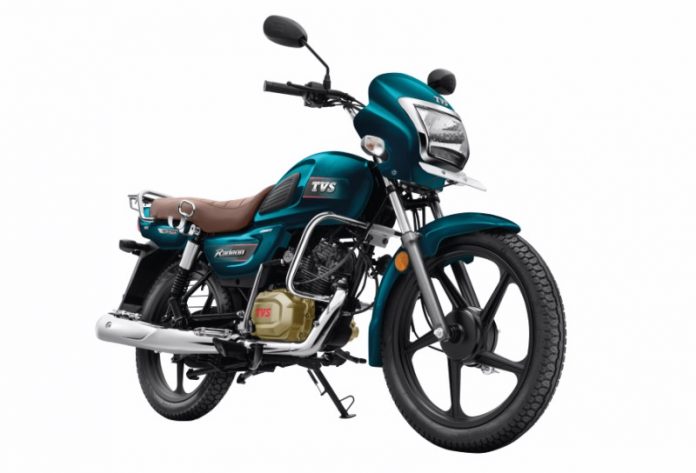 TVS Radeon colors swell to whopping ten shades with the introduction of two new themes. We share pics and details of the new offerings…

TVS announced the launch of the 2020 Radeon in April this year. It came equipped with ET-Fi (Ecothrust Fuel Injection) to gain the now-mandatory Bharat Stage 6 compliance.

And just ahead of the festive season, the company has brought it back to the headlines by introducing two new colors to the palette – Regal Blue and Chrome Purple.

The Regal Blue is available in the base trim along with the existing shades of Royal Purple, Pearl White, Golden Beige, Metal Black, Titanium Grey and Volcano Red. The Chrome Purple joins the Chrome Black and Chrome Brown in the COTY (Commuter Bike of the Year) special edition’s shade card.

In the BS4 to BS6 transition, Radeon lost a wee bit of power (0.2 PS) and the same torque maxxed 500 rpm later. The weight of the motorcycle increased by 4 kilos.

However, with the inclusion of the FI system, TVS claims that the fuel economy has gone up by 15 percent and the Splendor-rival is now more refined and comes with better rideability.

Radeon is a pretty nice package and is targeted at utilitarian buyers from the rural and semi-urban areas. From the new shades, the Regal Blue with contrast colored seat and engine casing looks catchy.

We recently tested its sibling – the 202 Star City+. You can read that review here.