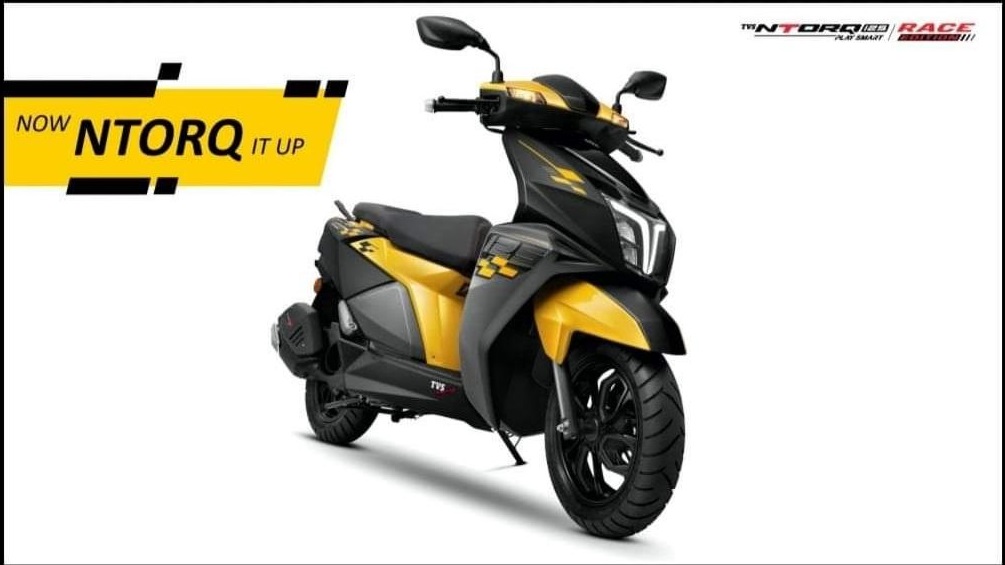 It looks like things are heating up in the 125 cc scooter segment, which is already hotly contested by the likes of the Access, Activa 125, new Grazia, Burgmann Street, and NTorq 125. In a latest update, TVS is looking to add a new RACE EDITION to the NTorq lineup.

The Race Edition, which was launched in September 2019, is currently available in Red and Black color option only. And now, it will be sold in a new black and yellow dual color theme as well.

While the front, rear, and a majority of the scooter is painted in grey-ish black, there are subtle hints of yellow (on the panels under the seat and on the front mud-guard) that spruce up the looks of the sporty scooter. Like the older Black and Red Race Edition, the new color shade continues with LED healdamps and LED DRLs. It also features chequered flag decals and ‘Race Edition’ logos on the body.

According to image, which probably comes from some dealer information portal, the new color option is already available for billing to dealerships. Which means that the scooter is absolutely ready to be dispatched and hence, an official announcement about its launch is expected in the coming few days.

Apart from the new color option, the new Ntorq is expected to remain mechanically unchanged and the same 9.1 hp (at 7000 rpm) and 10.5 Nm (at 5500 rpm) 125cc, Bharat Stage 6 compliant engine will continue duty.

While the pricing of the scooter is yet to be revealed, expect it to cost the same as the existing model – Rs. 74,365 ex-showroom, Delhi, which is a significant increment of almost 18 percent over the originally announced tag in September 2019. It could be slightly higher as well!