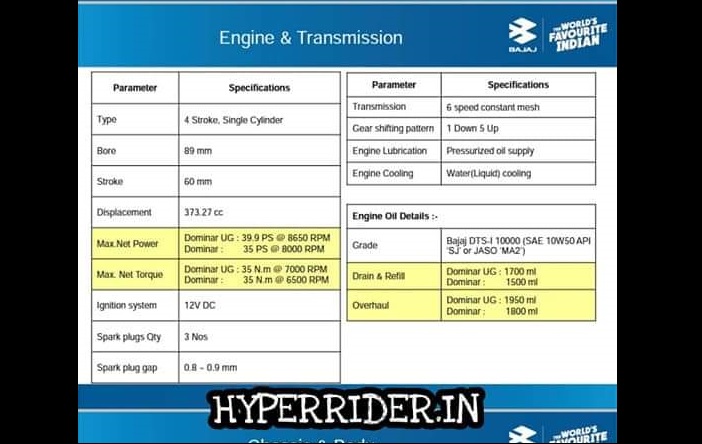 The 2019 Dominar 400 has been under tests for the last many months. Most of its external changes, like upside down forks, more informative instrument cluster, etc were revealed from the spy pics that have surfaced so far. However, its engine specs were not known, uptill now! Leaked document now details all the spec related changes that the motorcycle gets..

How has Bajaj achieved this hike and whether it is a DOHC set-up now – two things not known at this point. However, on the flipside, the motorcycle is now 2.5 kg heavier and tips the scale at 184.5 kg. The engine oil the motor requires is also 200 ml more (at 1700 ml) than the current version. Apart from this, due to the change in front forks, the oil capacity has also been increased to 440 ml.

The new double barrel exhaust is now expected to produce a deeper bass which is one feedback that they have taken from the current model’s weak tone. But what should also be remembered is that, with the exhaustive changes the 2019 Dominar 400 is getting, it could be significantly costlier than the existing model. We expect a hike of at least Rs 10,000-15,000 over the current 1.63 Lakhs – it could be even more!

Check out the motorcycle in new Green colour and the white colour is also making a comeback!