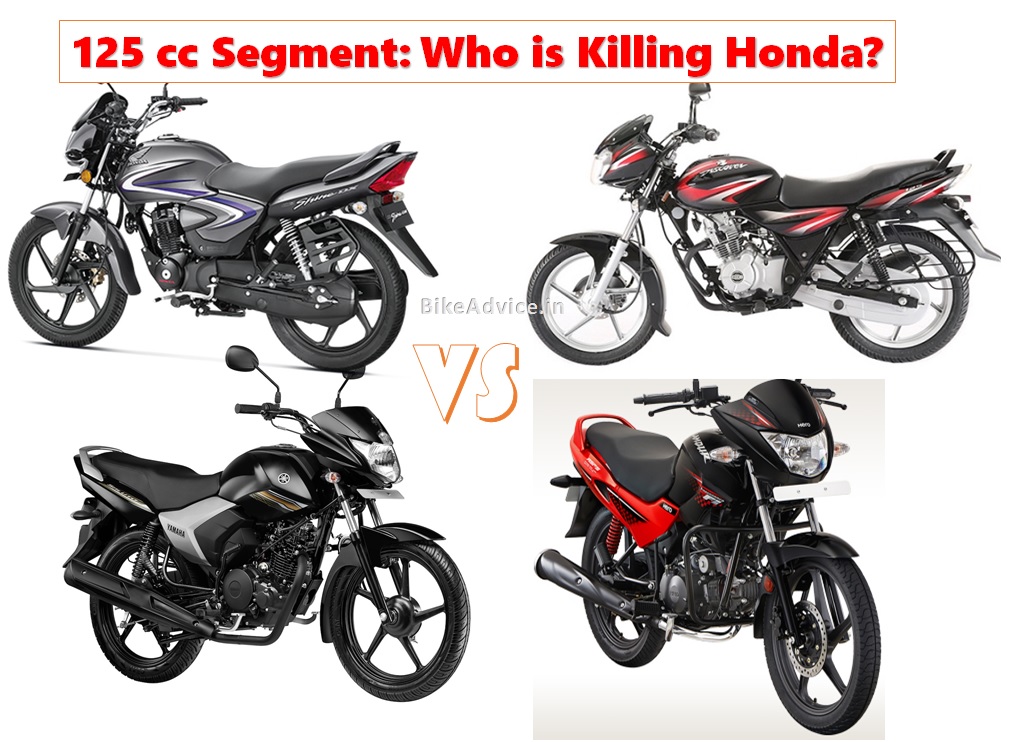 The financial year is over and we now have the complete sales list with us.. which means its time to provide you with the sales performance of manufacturers and who toppled whom to become the champion in this fiercely fought market. A little while back, we talked about the 100cc market and how Honda is just not able to make a dent in this space. You can read the detailed analysis with figures here. Now, let us talk about the 125 cc segment and who is making noise here…

The 125 cc segment provides motorcycles which are slightly more powerful but are almost as fuel efficient as their 100 cc counterparts.

Honda has been the market leader and it continues to lead this year too but under shaky environments. They have shrunk to 8 lakh units loosing around 48,000 units as compared to the last fiscal. Their old work horse, CB Shine is now showing its age despite the countless sticker jobs it has gone through. To counter the fall, Honda has introduced Shine SP with an extra fifth cog.

Here comes the real surprise – who is causing Honda all the problems? Its their rival Hero! And they are doing it with the Adam’s-era Splendour 125 and Glamour!

Despite a fall, they have come precariously close to Honda and the bigger threat comes from the fact that, since December 2015, they (Hero) have overtaken Honda three times in monthly sales! To give you an idea, for the month of March 2016, Honda sold 47,600 units of their 125s whereas partner turned arch-rival Hero sold 58,883 units of their Super Splendors and Glamours.

The distant third Bajaj, though showed growth, is nowhere in the game. Their confused strategy of truckloads of Discovers has clearly failed and they currently only sell the basic Discover 125 in this segment. We are informed that they have plans to introduce new motorcycle(s) in this space probably under a new brand.

On a smaller scale, TVS and Yamaha seem to be picking pace with their Phoenix and Saluto respectively. Suzuki comes last with dismal sales and a forgettable product!

So, this is how the 125 cc motorcycle segment currently stands. With newer products and never-ending clashes between rivals, it will be interesting to see how things pan up next fiscal. Next we are compiling a similar story on the 250cc segment, so stay tuned to BikeAdvice… 🙂