Hello Bikers. This is Ajay Samuel doing III Year B.E. Mechanical Engineering in Chennai. This is my Ownership Review about My Yamaha YZF-R15 V2.0. In this Review I don’t want to express feelings for my bike or do a comparison between the previous versions of R15. 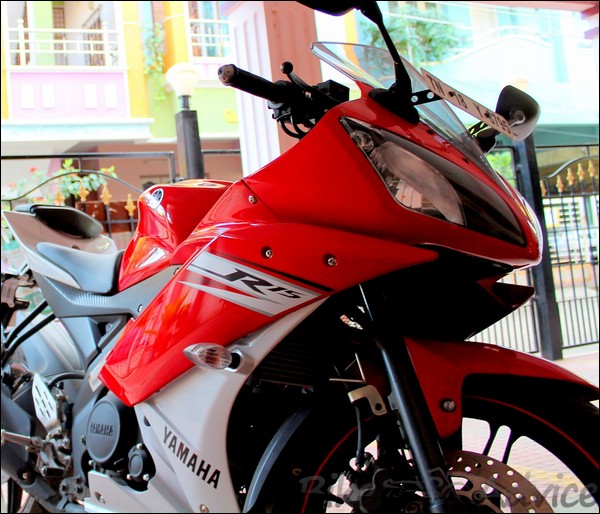 I will be basically dealing with all the factors which the basic Indian rider wants to know about and also a little comparo with the other bikes in its segment.

Time for a New Ride

I’ve been driving regularly for about 5 years now from home to school/college. I’ve owned a few bikes in this period.

I and my dad had a Pulsar and an FZS for our usage. The Pulsar (UG3) had done about 50 k Kms and had been giving lots of maintenance issues. So my dad took the FZS and asked me to select my New Bike. Dad wanted me to get a bike with decent mileage. 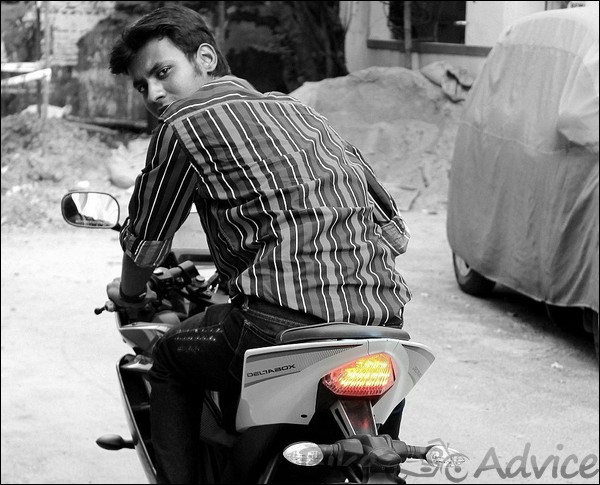 I went into research mode. I did a lot of homework before getting my new ride as this was the first time I was asked to select my ride. I went through BikeAdvice and xbhp websites for reviews of many bikes. Initially I kept aside from bikes priced 80k+. I wanted a racy 150cc bike with killer looks, mileage of about 45-50, good handling and lesser maintenance issues.

I saw almost all the bikes in the 150-180cc segment but each bike had its drawbacks. I had to compromise on something or the other until I saw the R15 2.0. I was simply stunned by the beauty of the machine. I was really tempted to get it. Amidst mixed suggestions from people around me I decided to sacrifice the mileage part of my expectation and decided to get it.

Now I have no regrets at all although people told me to wait for the launch of the duke and pulsar. It’s an absolute eye turner and also one of the most technologically advanced bikes in India. As I am a mechanical engineer the technology of this bike was the best at the moment so I never had second thoughts while getting this bike

One may lie to you that biking is all about the quality of the ride and not just looks. But in reality No one would like to buys a performance freak bike with awful looks would we? When I bought this bike it was the best looking bike at that moment. After that came the CBR150R (Auto Expo) Duke and also the Pulsar NS. I’d still say this bike reigns supreme in this department. 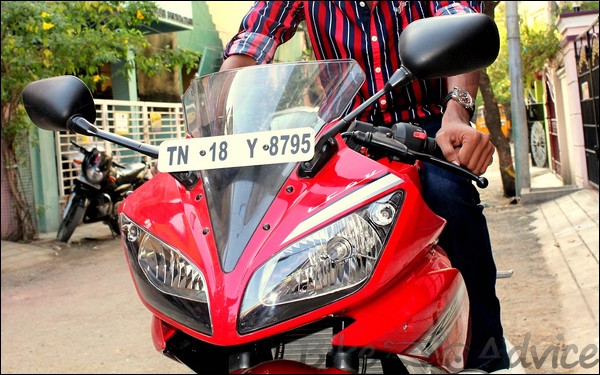 It’s a fully faired bike with killer styling all around. You simply can’t find a flaw in its styling coz it’s such an Eye turner and every girl would want her boyfriend to have this bike. Even If you don’t want to show off with your bike it grabs a lot of attention. The KTM Duke and Pulsar are for a set of people who love naked bikes.

But most people find the Faired bikes better. Karizma ZMR and Pulsar 220 cant even come close to this bike in the looks segment as Pulsar is a semi faired bike whose styling doesn’t do justice for a 220 cc. The ZMR looks good in white but its tail and overall styling doesn’t blow you away. It stands apart from its rivals in this department.

Ever wondered how a 150cc bike draws comparison with 200+cc bikes in terms of performance? That’s the beauty of this bike. It’s the undisputed champion of the 150cc segment in this department too till date. It’s because of a wonderful 149.8cc Liquid cooled engine with Electronic Fuel Injection.
Now what this means is, Due to Liquid cooling the Engine does not heat up easily like the other air cooled engines even after driving at around 100 kmph for a good amount of time. This also helps in retaining the good engine performance even after the bike is 3-4 years old. Fuel Injection system will supply the fuel directly with the aid of an electronic control unit. 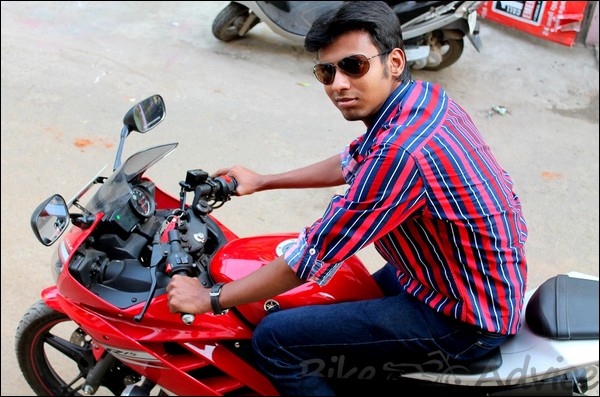 This helps the bike get a good mileage and a linear supply of fuel to your bike. As this is an EFI bike you can say goodbye to your kicker, Fuel knob and also choke. I haven’t checked the Top End of my bike but my friends say that you can reach about 130-135 kmph without pillion in stock conditions. Its acceleration in the lower RPMs is average but once you cross the 5000-6000 range you’ll become uncatchable.

This bike has a super smooth engine. It doesn’t have any vibrations. The Engine performance does not drop after a few years. Its Quality all around. This bike is built with utmost care such that every customer feels that his money is well spent.

But Now Performance biking category is having a lot of good products too. The CBR150R will be coming soon and is speculated to be more powerful (lesser torque) than the baby R, The KTM duke is a performance delight with its light weight can Out Run all other bikes except the Ninja. CBR250 is also an amazing performer.

Pulsar 200 NS and 220 are comparatively cheap options for power hungry bikers. But above all the R15 is a proven performer and is enough to blast through the traffic in city road. Also it is to be noted that there are a lot of performance upgrades for this bike which can make it touch 150kmph.

This is the one department which will give this bike a decisive edge over the other bikes. Yamaha scores really high in this department as this bike is one of the best track tools available in the Indian market. It has a delta box chassis which gives it amazing stability even while cornering at high speeds. It is lighter than most of its counterparts in all segments although it might look heavy for a third person with the full fairing and others. 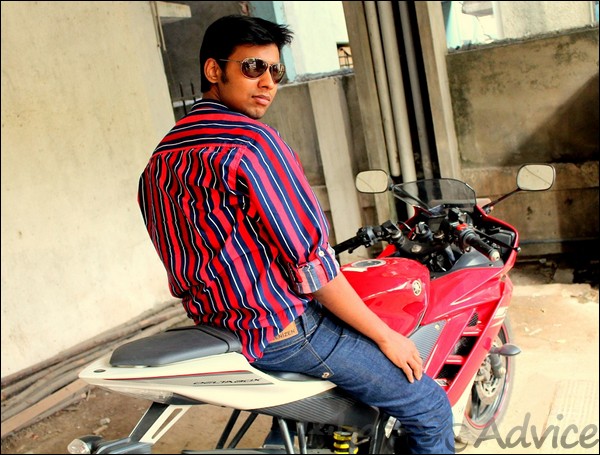 It can be flicked effortlessly in traffic even if you are a novice rider and you can overcome corners even at the speeds close to 100 kmph. It is truly a benchmark bike in this segment. You will no longer find traffic hard to overcome. Its competitors might have more power in terms of bhp but what’s the point in reaching high speeds without control.

It’s easy for the common biker to get blown away by the performance figures on the spec sheets. But they don’t tell you the whole story. The Pulsar 220cc and the Karizma even with higher performance figures will smell the R15’s exhaust in city traffic conditions which allows the bikes to touch speeds between 30-80.

It’s a sports bike so don’t expect a conventional seating position. You’ll have to lean front a bit. With a few days of driving you can easily get accustomed to it. You might have pain in the back and shoulders but you’ll soon overcome it so this won’t be much of a problem for youngsters. But if you’re 35+ and if you’re into daily commuting then you might have to be careful in this department.

For me this seating position is perfect for this kind of a bike. If you want a more upright positioned performance bike then you can take a look at the CBR
. When it comes to Pillion comfort. It’s a big thumbs down. Not the best bike for a pillion but its not impossible to take your mom for 20kms at a stretch. So if pillion comfort is a priority then you have to look deeper into this aspect of the bike

Here comes the Million Dollar Question. What Mileage? Before I got this bike the ownership reviews of many people said that it would return 40 kmpl with sane driving and 35 when you start revving hard. But a few people who have never even ridden this bike said that this bike will return only 20-25 and I even heard a guy telling that it returns only 10. On a serious note these comments from people were misleading. 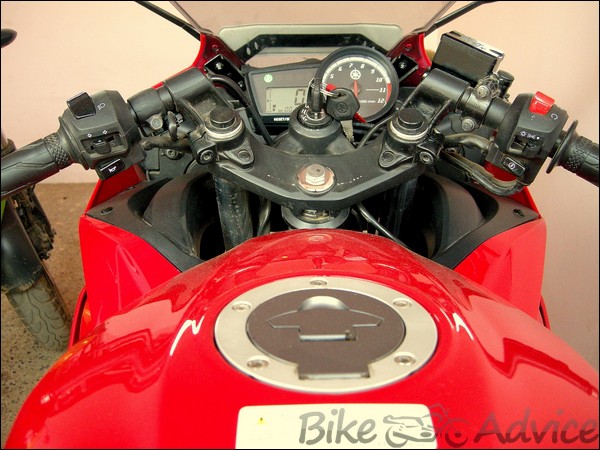 After driving in city condition I calculated its mileage. To my happiness I got 41-42 when I kept the throttle in 4-5k RPM( which is about 60-70 kmph in 6th gear). When I started revving hard and driving a little faster I still got 35+. I haven’t checked in the highways but I guess you can get a max of around 45kmpl if ridden properly. So I finally Rubbed this figure in the faces of those who claimed it cant give this much mileage.

So don’t let people mislead you. Trust me and the other owners. With a proper Run-In according to the manual and proper driving you can achieve these figures regularly. Although everyone’s driving style might be different you surely won’t get mileage of 20-25 unless there is a big problem with the bike or the rider.

Although this bike doesn’t have ABS there is not much of a problem to bring this bike to a halt. Brake is one of the most important components of a bike. And that too for a sports bike you expect sharp braking. Yamaha doesn’t disappoint. The bike doesn’t skid much and performs well in all conditions.

Both Tyres are tubeless tyres and the rear tyre is wider compared to the previous version. The Tyres have perfect grip on all roads. No complaints whatsoever.

The Suspension is tailor-made for good roads. It has a mono cross suspension which performs really well in tarmac. The Stability in higher speeds is really good. But as it’s a little hard off road. It won’t be able to take pot holes well and the pain will be felt by the driver.

It has a stylish instrument cluster with a white backlight. It has an ODO,2 Trip meters, A bold Speedo and a Fuel gauge which are digital. It also indicates the amount of kms travelled in reserve fuel. It has an RPM meter which is analog. Overall it’s pretty stylish and functional. It has a dual headlamp. One of the gets lit for low beam and both for Hi- Beam.

It costs about 1.21 Lakhs On Road here in Chennai. You can be easily mislead by people when they say 1 lakh+ for a 150cc because it’s hard for common people to realise the technological advancements of this Bike. But I feel it’s worth the price. Quality products don’t come cheap. 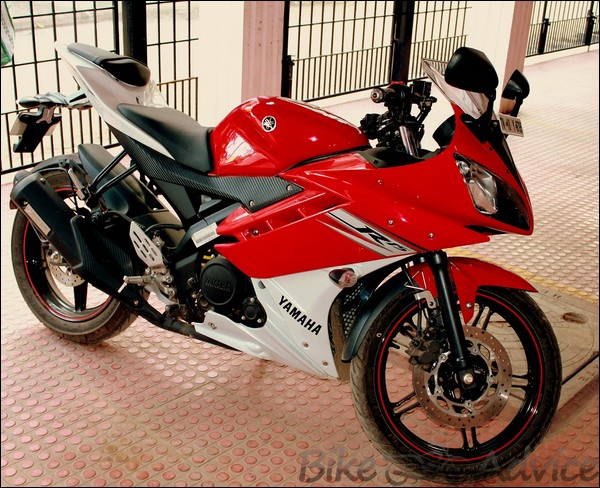 What more can you ask for. And it’s has genes of the R1 and R6 which are internationally acclaimed sports bikes.It’s got everything so the price is well justified.

Every bike has its own Pros and Cons. It really comes down to the requirement of the customer. According to me this is a brilliant bike engineered in the best way to extract peak performance and also to grab a lot of awe from everyone. To be more clear-cut This is a Sports Bike. You cant expect terrific mileage, pillion comfort, painless commuting from this bike because its built for a purpose and that is to set the roads on fire. 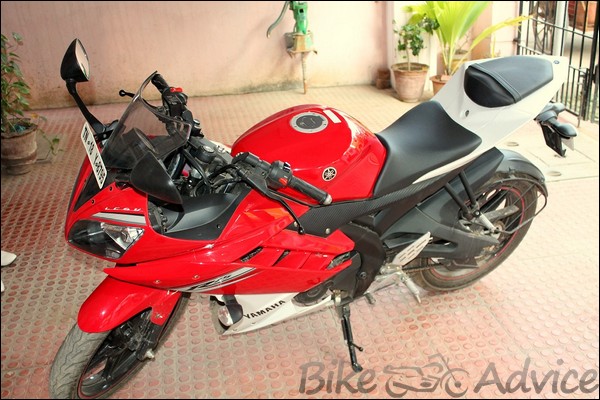 The feel when you get when you rev this bike hard is amazing and your bike gladly accepts the revs with pleasure and delivers outstanding performance. Overall If you want a pulsating, youthful, exhilarating and top quality race bike with excellent handling then look nowhere else, Here is your destination.

By the way, Everything mentioned above is my personal view and I stand by it. I’m sorry if I offended any of the people who are fans of other bikes I mentioned above. Cheers. Drive Safe