Yamaha has unveiled it’s 2010 model “one”. Yes, the much awaited 2010 YZF R1 has been revealed by Yamaha that has taken a clean sweep of all the racing hearts around the world. The reason? It’s pretty simple with the technology that is offered in MotoGP is now on R1. 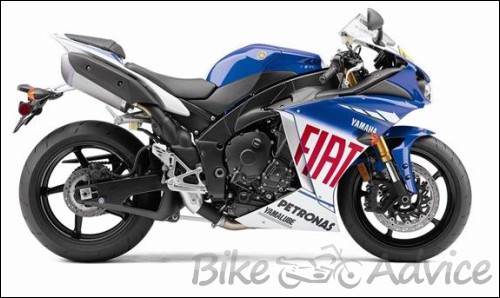 Yes, we all know that it’s already available in 2009 YZF R1, anything new? The answer will be a big yes! Because, Yamaha has finally come up with the bold and the beautiful Rossi replica theme in the 2010 YZF R1 with those stunning “Fiat Yamaha” Team graphics, “#46” and “The Doctor” decals including a bright replica of Valentino Rossi’s signature on the fuel tank. That provides the ultimate style with substance for all the Rossi fans. 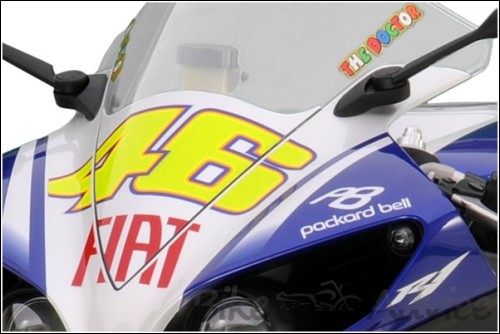 Ok, apart from all show, does this bike really go? I know this sound really stupid to put such a dumb question against the “one” but what’s the truth, as Honda also have showcased their 2010 CBR1000RR and so do other manufacturers as well with their own state of the art technologies. What separates this bike from the rest of the liter class super bikes? 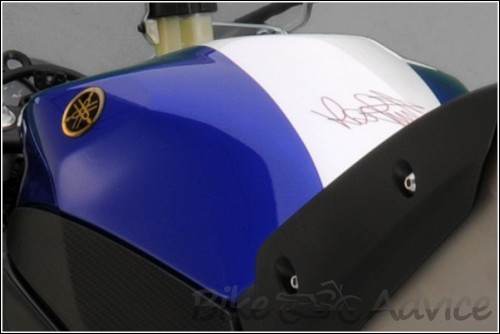 The Cross plane crank shaft: This is the “one” that separates men from the boys. This technology was first pioneered in MotoGP racing with the YZR M1. The technology behind this is that it puts each piston at 90 degree from the next with an uneven firing interval of 270-180-90-180 degrees respectively. 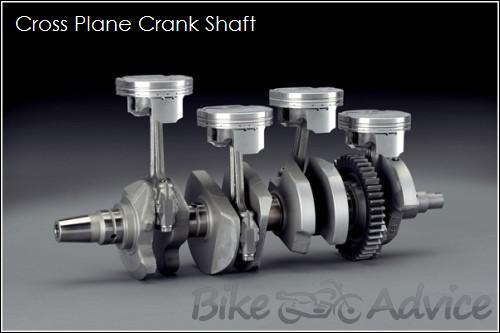 Crazy stuff isn’t it? Does it matter in street bikes? Yes, because Yamaha wants the world to know what kept them winning in MOTOGP and now they wanted to implement them in street bikes preferably in YZF R1. I know there are questions arising like, are there any advantages? And the answer is yes, the advantages of these are pretty huge, as it lets the power to build up smoothly which provides better and smooth roll-on’s out of the corners with a firm plant of the bike on ground. The engine also features forged aluminum pistons that take maximum advantage of the power characteristics coupled along with titanium intake valves that are lightweight in construction. 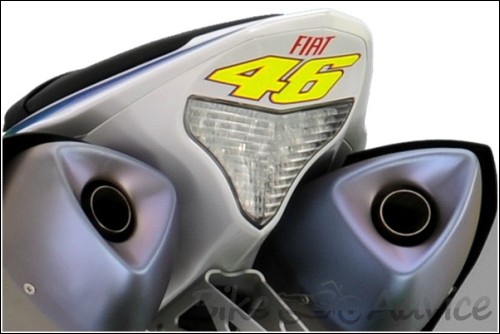 Dual Under seat Exhaust: The dual under seat exhaust not only enhances the look of the bike but does more than that. The exhaust is carefully designed to enhance the engine output while the three way catalyst technology will take care of the emission and sound norms and with all these norms the bike is still a screamer.

Fuel Injected: The fuel injected engine has the full advantage of Yamaha Chip Controlled Throttle YCC-T coupled with the MotoGP inspired YZR M1’s Fly-by-Wire technology that delivers instant throttle response irrespective of the engaged gear. The engine also features the Yamaha Chip Controlled Intake YCC-I a variable intake system that wideness the spread of power. The fuel injectors also have 12 nozzles for optimum fuel optimization that translates power from every fuel that burns. 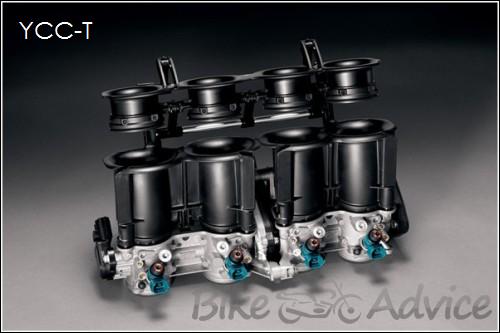 Drive Mode: Yamaha offers the Yamaha D-Mode also known as Drive mode variable throttle control in which three drive modes can be selected according to the purpose that are easily accessible in the handle bars. The “A” mode is typically track mode that puts more emphasis on engine response in the low and mid range rpm. The “B” mode provides less sensitive throttle response that can be used for city riding and the last the Standard map is designed for optimum overall performance.

Yamaha the inventor of Delta Box frame, will they do any lesser for this beast? The frame is rigid and solid and is composed of controlled-fill die-cast, stamping and gravity casting that contribute a majority of the bike’s handling.

Forks: The bike features SOQI front forks (for people wondering what’s SOQI, it’s just a division owned by Yamaha that manufactures Shocks) that is exactly the same in the race winning MOTOGP YZR M1. What’s the difference it makes? The difference is that both the forks always move together which shares the duties among themselves where the compression damping duties will be taken care by the left fork while rebound damping is precisely handled by the right fork which eventually reduces oil cavitation.

Rear Shock: The mono rear shock a feature both high and low speed compression damping and also has an easy-to-use hydraulic screw adjustment for preload. The unit incorporates pillow-ball-type joint for exceptional shock absorption, road feeling and exceptional damper response. The brilliant and crisp handling characteristics are achieved by the bottom linkage that is designed to work with the rest of the chassis.

With all the features, the bike is sure to set the pulse racing. Here goes the news for the light hearted people, this bike is a limited edition “one” and only a few will be available throughout the world although there is no idea of Yamaha India bringing this bike to India but when here will surely keep the hearts and tracks on fire.