Greetings dear friend. This is Senthil for you, with an intention to share my experience with my bike. I own a Yamaha YZF R15 V2.0. My bike has crossed 1963 Kms as on the date I am writting this review. With this lets start our travel into my experience. 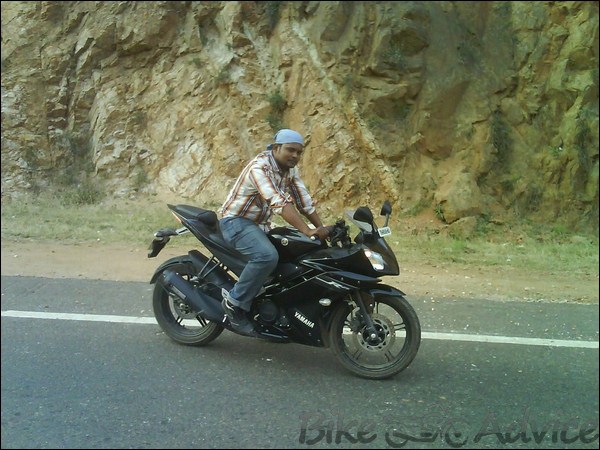 I considered the following three bikes during my selection phase.

Karizma ZMR was my first option since it had a bulk look and I love the white color on the beast. When I test drove the bike, I felt like, say I want more power. Also I was not satisified with the top speed of the bike. So I just ruled it out of the list.

Next came Pulsar 220F. The price tag was attractive for a 220cc monster. I test drove the same. I was comfortable with it. It really gave me the feel of raw power in it with its top speed. The headlamps were too good and really deserve a mention here. But with the snaps I took with it, I felt like, I was not suitable to the bike. My height is 5.5 feet and hence it seemed I was shorter to handle the bike. So next one to be ruled out was Pulsar 220F.

I was left with only the option of R15 and when I test drove it, to be frank I felt like the bike was tailor-made to me. It impressed me in almost every department. I was madly in love with every second I spent test driving the beauty. Immediately after the test drive I booked one. I got it delivered in the next day. I loved the midnight black variant much. The Limited editions were not available at that time.

The Yamaha had laid no restriction on this black beauty in respect to top speed during the run-in period but the rpm in the tachometer must not exceed 5000 for the first 500kms. The bike does a decent 70km/hr speed within this rpm range and I was satisified with it in the day to day city traffic. I did my first service after 532Kms and got the engine oil changed. The bike was still in run-in period.

The limit now is 7500rpm for the next 500kms. The bike does well above 100km/hr and less than 115km/hr within this rpm range and it was slightly not enough for me during the highway rides. But in cities it was adequately enough for me. All through the run-in period, I struck strictly to the rules laid by Yamaha!

In my family and relatives circle, the first question that came to me was “How much does it give?”. I felt proud when saying them that my bike returns me a pretty decent mileage of 45Km during city ride and approximately somewhere around 38 and 40 Kms during highway ride. Yeah, the bike in any case when driven below 6K rpm will return you a mileage of minimum 40kms or above.

When you go in search for the power it can produce, the mileage drops a bit, but yet it will return you not less than 38Kms. All Kms I have mentioned above is in respect to 1 Litre of petrol. I used to use only xtra premium for my bike.

This will be the next concern for many who are thinking to buy an R15. I would like to mention the maintainence costs involved with the bike. The engine oil needs to be changed in the first service and the Yamaha engine oil was priced Rs 470 with my dealer. No other changes needed during the first service. In the next service you would need to change the engine oil filter.

Most of us will be interested much about the top speed our bike. I have so far pushed my beast to reach 132Km/hr speed. I had almost two or three threads of throtle left to be twisted and the tachometer was hitting somewhere between 9000 and 9500 rpm. So with almost 1500 rpm in green zone left and two or three threads of throtle left the bike should reach 140+km/hr speed with ease, I guess.

This is really excellent for a 150cc bike. The most important thing that deserves a mention here is that the bike’s engine sound never changes even when you revive it hard. There is no sense of any vibrations too, sofar even at the highest speed I reached.

The one aspect that makes this bike a segment leader is its “handling”. The bike’s transmission with the brand name of Yamaha on it, is butter smooth as expected. The transmission ratios are also well set for both commuting and racing purpose. The bike will inspire and make you addicted to biking even if you are a Novice rider. The stability and confidence it provides, will ask you to attack corners.

This one feels best in corners and handling, among all the three bikes mentioned above.You will love twists and turns in your path if you are riding a R15. I promise you that the words “engine vibrations” and “body vibrations” are absolutely meaningless in the dictionary of R15. The torque is reasonably distributed well in all rpms.

The bike has two characters in it. Its an angel when you drive it under the 6.5K rpm and when you cross the 7K rpm mark, you will surely feel the beast in the bike unleashed. It feels as a completely different bike providing you raw power, sheer stability with tons of confidence and joy. I admire the Yamaha’s engineering in hiding a beast behind an angel.

I am personally great admirer of ABS. I used to feel that Yamaha should have installed an ABS with such a sporty bike, until I drove it. The black beauty of me changed my opinion completely. It taught me to enjoy the responsibility and fun in braking. The combination of Yamaha and Nissin has worked out well in the braking department.

The bike never skids on hard breaking at any speed, given less than 100km/hr. You have less to worry about the skill in hard braking when you are driving less than the triple digit speed, where as beyond it the bike skids slightly yet gives you the confidence to keep it in control. I have personally tried hard braking many times and it impressed me everytime. With the wide wheel base that comes with R15 V2.0 braking is a piece of cake. 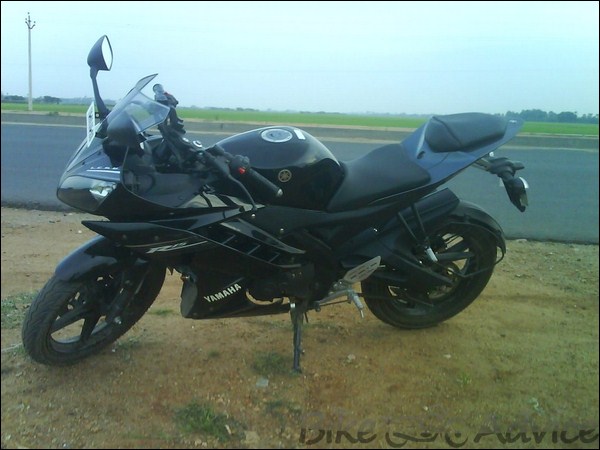 Though the view on looks is personal and differs from person to person, I can gurantee you that majority of the people will love to have a look at your bike. I feel proud when someone in a car at a petrol bulk enquires me about the bike. In signals too I get a lot of attention. Above all I like my bike’s look to the core. I conclude this section saying “Most would love your bike and few may hate it”.

The headlamps does its duty well. Yet it cannot be compared to the projector lamps of Pulsar220. The low beam and high beam can be well differentiated with the single eye glowing and dual eye glowing of the bike respectively. The headlamps are apt enough for night drives in highways. I accept here that this is not the segment leader in case of headlamps.

The liquid cooled engine with the radiator helps the bike in dissipating heat rapidly which makes it suitable for long drives. Also when you revive it hard the excessive heat developed is well dissipated so that you wont get noticed that you are actually reviving it hard. Its a master piece in 150cc liquid cooled engineering technology.

There is absolutely no cold start issue associated with this bike. The maintainence free battery from TATA Green batteries comes with one year gurantee and brings the bike to life absolutely in one press of the starter button inspite of cold temperature in the early morning or midnight. I would advise you to remove the battery and keep if you are not going to use your bike for more than a week. This as told by Yamaha will avoid draining out of the battery and increases battery life.

Having discussed the major aspects of the bike now lets come to other factors that will help you decide if this “angel dressed beast” will suit you.

Two Questions To Answer If You Are Choosing This Bike 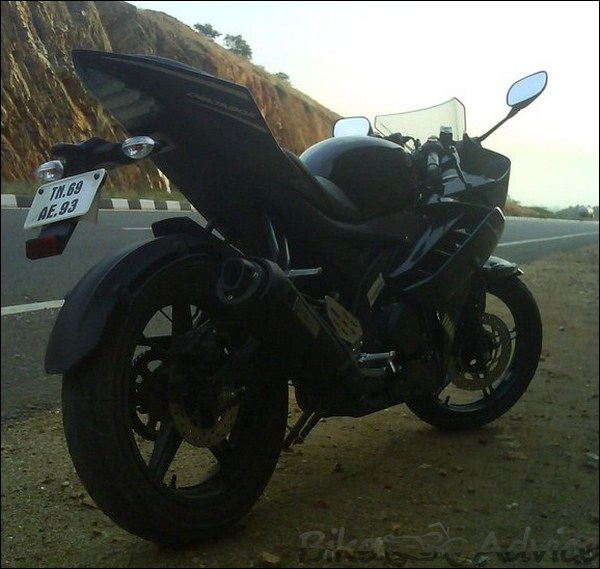 I had my first accident on the way between thiruchendur and tuticorin. I was trying to corner my bike at speed bit more than 95Km/hr which was beyond my limits. I am comfortable with cornering at 80 to 90 km/hr. I just tried to push some more from my safety zone. I lost control and had to brake in emergency. The bike skidded to a minimum and stopped with in a braking distance of some 3 to 5 metres and slided to one side.

When I got up and brought my bike to the stands and checked it, I found only a broken indicator and nothing else faulty. I checked myself for any scratches. I hardly found one, thanks to the jeans I was wearing. I was impressed heavily with the sheer handling that my bike provided even at such a bad position, quality with which its body is made and the efficiency of braking it provided.

I now feel really proud to say “Yes Yamaha” and take this chance to salute Yamaha for such a wonderful piece of engineering. I forgot to mention that the bike has sensors which detects the bikes traction angle, when the traction angle goes beyond a preset value, the sensors kills the engine automatically. So the bike gets switched off automatically when you have a fall. 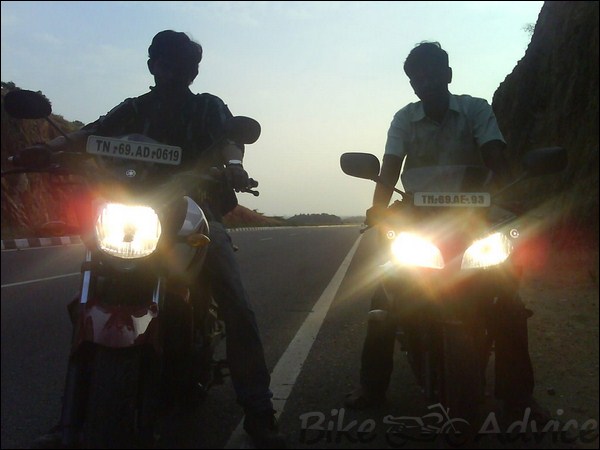 With this I conclude my talk about my bike with you friend. My final words to you are “Yamaha YZF R15 V2.0 is worth every penny you invest in it. Just check if its characteristics suits your need.” I am looking forward for your comments. You can also reach me at “senthilkumar.msec.ece@gmail.com” and “http://www.facebook.com/profile.php?id=100002654850619”. Take care. Happy riding. Always remember “Riding safer is smarter than riding faster”.

Thanks to BikeAdvice for providing a chance to discuss my experience with you friends and thanks for your patience to listen to my discussion.