After the breathtaking launch of India’s technically most advanced bike, Yamaha hasn’t sat back and enjoyed the cult status. They recently launched Racing Kits for the performance aficionados and now they are back with new clothes for the mini R1, just to keep the nerves pulsating for this product. The bike, now is available in four more colors which are named as Impact Yellow, Midnight Black, Sunset Red and Racing Blue apart from the existing three (Blazing Red, Graphite and Yamaha Blue). 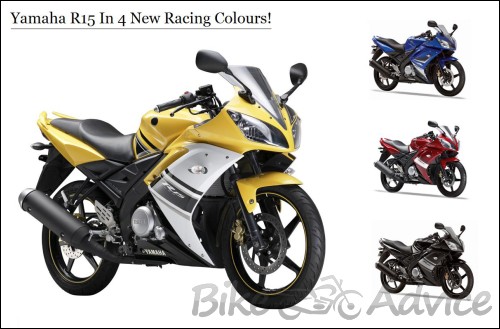 This makes the total of seven different color options for the customers to choose from. All the colors have body colored grab rails as common as was the case with earlier versions which further compliment the look of the bike. Apart from the coloring scheme, the graphics have been revamped which makes the bike look even fierier.

All the new colors instill a fresh feeling and as a result all the three older colors look bland in comparison to the new ones. The Yellow color (named as Impact Yellow) needs a special mention as it stands apart from the rest and looks awesome and we wonder why other manufacturers are shy of this color, especially after the success of Yellow Apaches and Yellow Karizmas. The best part about it is that the new models are priced similar to the old models which make it a double treat. All the other features and specifications remain the same. We also wish a white colored R15 with red colored body graphics reminiscent to the R1 which looks a killer, but may be some other time!