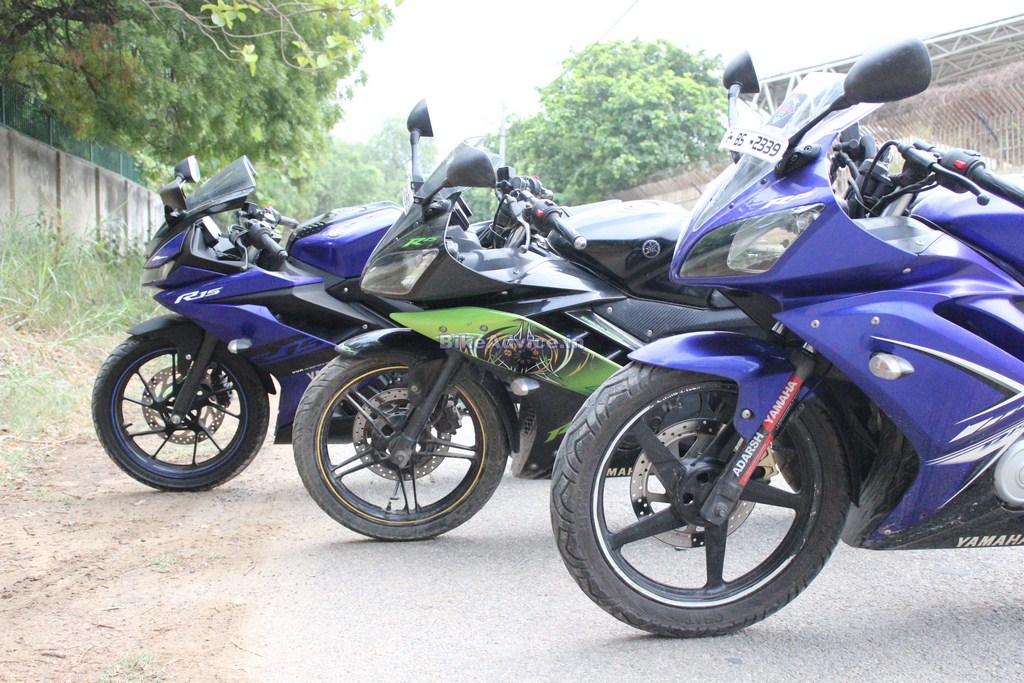 “He was riding alongside at 150 km/h, AND he had a pillion!”, exclaimed Chhotu bhayya, aka Ashwini Rana, the gent who has been bringing hundreds of dead Yamaha RD350s in north India back to life since the late ‘90s, in addition to injecting jiaogulan into many other RDs, including my two 350s as well. This former racer has won more trophies in motorcycle racing than the combined number of social media pictures of all influencers who get to experience track days for free, thanks to small mercies of some manufacturers, and who then write “racer” in their Instagram bios. Chhotu Bhayya doesn’t. So when he talks, you shut the hell up and listen.

This was in mid-2009, shortly after I’d missed riding with our RD group to a Yamaha event in Greater Noida. He was sharing how, for the first time, an Indian motorcycle was running alongside the RDs at full chat. That motorcycle, ladies and gentlemen, was the first generation Yamaha YZF-R15. 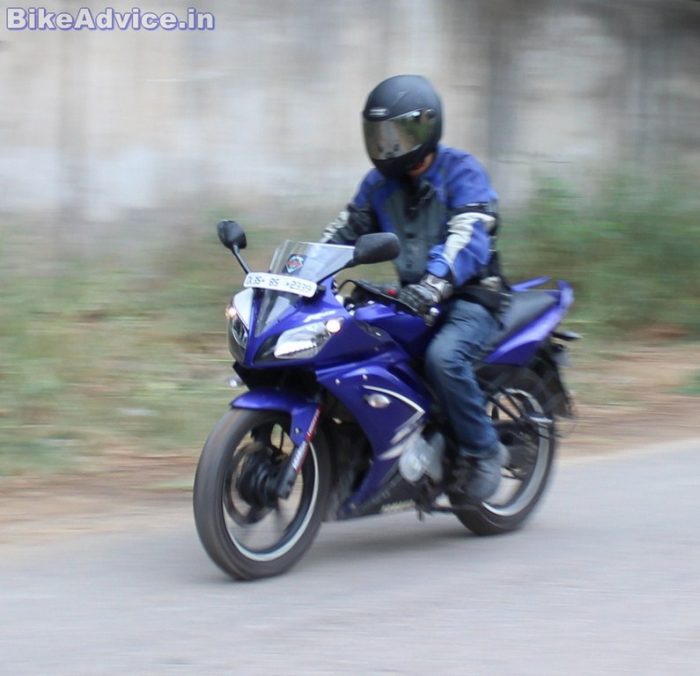 It was a motorcycle that got Yamaha back in the game and in the minds and hearts of enthusiasts after what seemed like an eternity ever since the last RXZ 5-speed rolled off the assembly line in Faridabad in the early years of the second millennium. The Gladiators and Cruxs being dished out in the interim by Yamaha to folks used to the RDs and RXs were like the best variety of cucumbers being presented to the man-eaters of Tsavo. Mind you, those bikes were brilliant too; it’s just that the masses never tried to look beyond the Splendors and Passions. They still don’t, but that’s a topic for some other day. 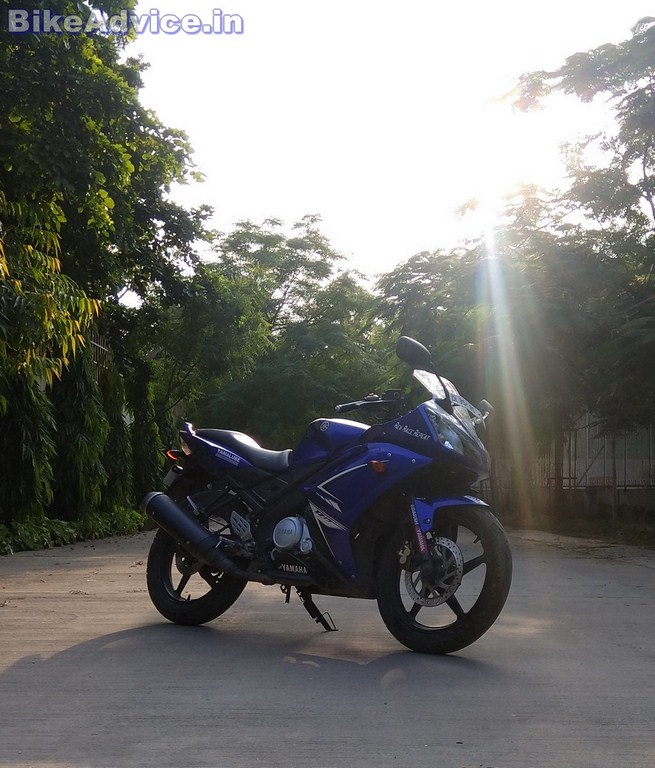 Finally, in 2008, Yamaha returned to its roots and brought two sensational motorcycles to India–YZF-R15 and FZ-16—creating a segment, and redefining another, while at it. Ten years down the line, both motorcycles remain at the top of the heap! I’ll speak about the R15 here, of course; I’d talked about the FZ in the FZ-S FI review back in 2014. 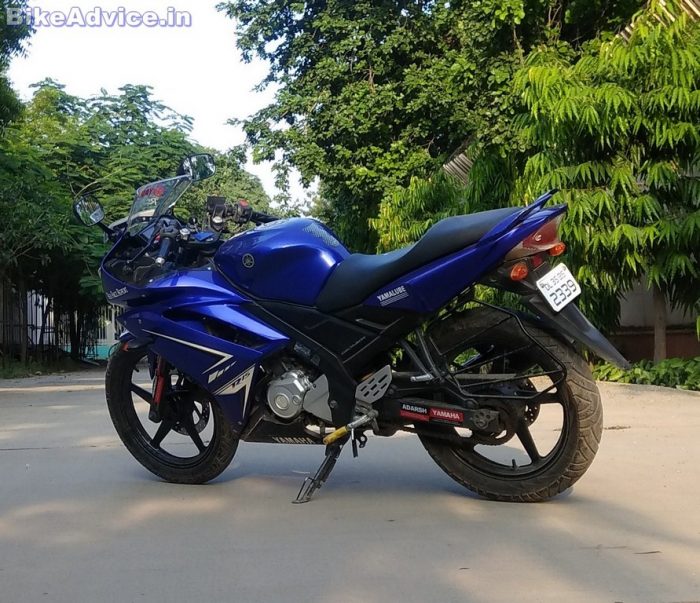 The R15, back then, was a revolution. How, you ask? Well, for a number of reasons that go beyond its “superbike-like” looks (which though were solely responsible for more than 90 per cent of its sales initially). It was the first, er, fully-faired motorcycle (the Yezdi SuperSprint of the ‘90s remained a prototype, sadly) in India; the first liquid-cooled motorcycle in India, and also the first bike to come with a perimeter (Deltabox in Yamaha speak) frame in India. 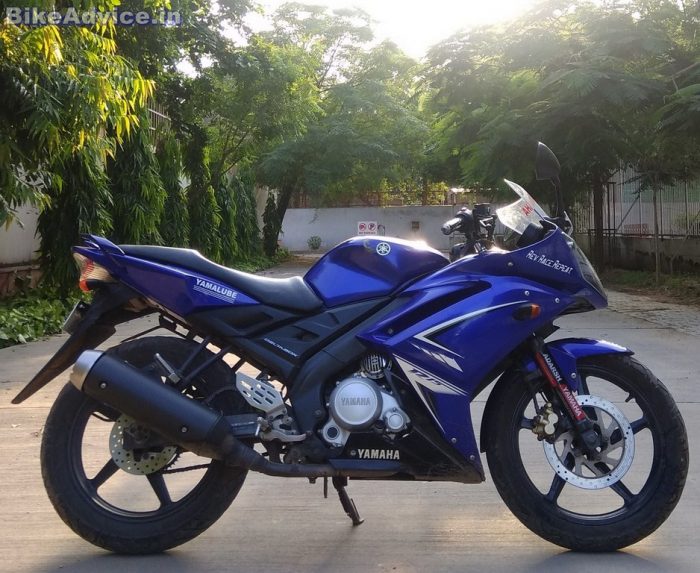 Now while the first two features helped it in throwing the “no replacement for displacement” notion out of the exhaust canister, the third novelty brought true sportbike-handling to the masses. Heck, it was the first motorcycle that properly taught them to use the front brake to stop the bike. 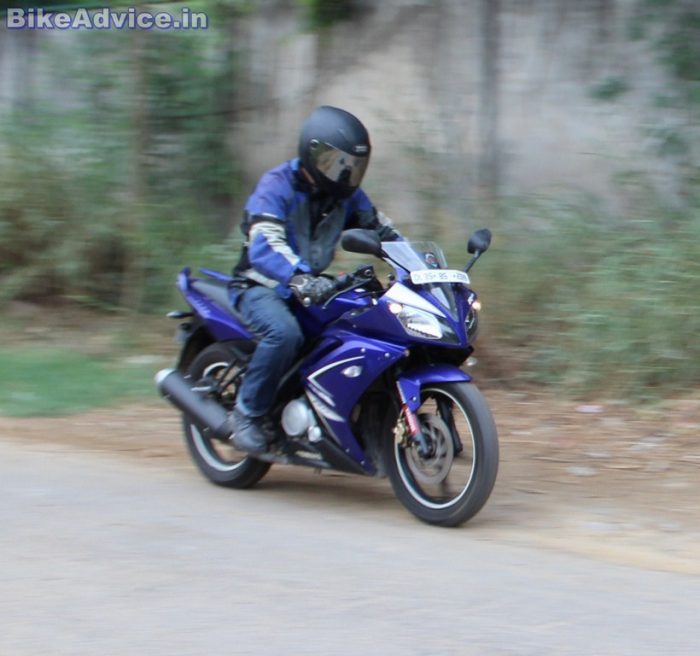 It was also the first time in India where a tyre manufacturer (MRF in this case) had to develop tyres from scratch for a motorcycle, based on continual feedback from the motorcycle manufacturer (the rubber compound finally chosen was arrived at after numerous batch rejections). Not surprisingly, the grip was phenomenal, and the R15 V1 remains responsible for the “first knee-down” for the majority of track junkies in India. The bike in the pictures is wearing fatter rubber though. 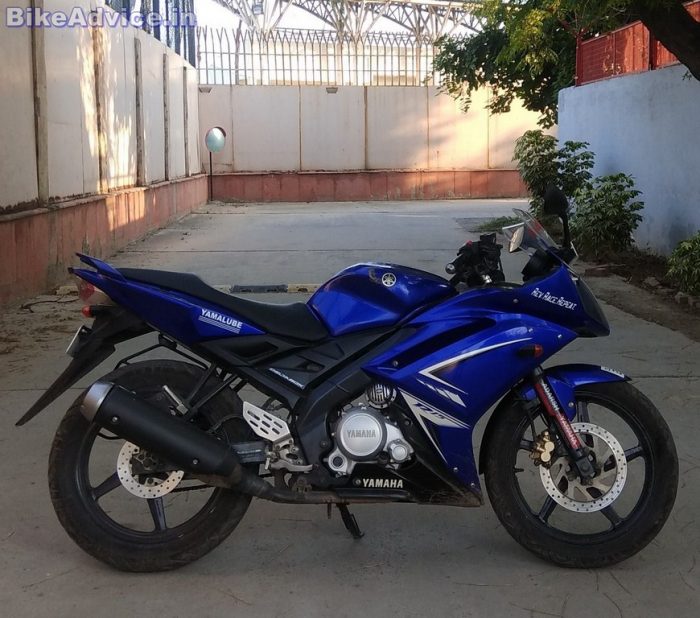 The R15 was also the first small capacity motorcycle in India to be launched at above INR one lakh on road! If I remember correctly, the 223 cc Karizma retailed at around INR 80,000 back then while the Pulsar 180 was even cheaper. But, the R15 still flew off the showrooms. Why? Because while the enthusiasts loved its handling and sky-high redline (10,500 rpm), the posers loved the R1-inspired looks. Excellent fuel efficiency, bullet-proof reliability (forged piston and sleeveless DiASil—acronym for Die-cast Aluminium Silicon—cylinder play a very important role here), and relatively cheap cost of spares & service were appreciated by both. The fact that it could decimate the P180 and Karizma in the twisties, and fluster them on the straights, was the cherry on top. 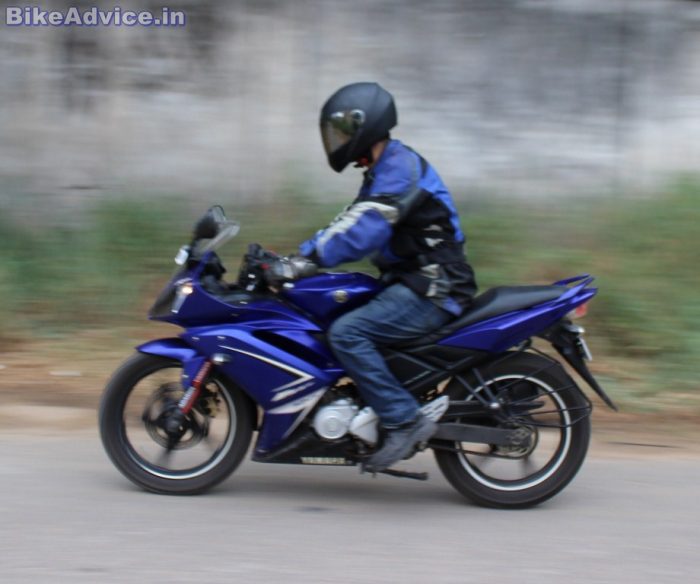 Owners raced it; toured on it, and went to college/office on it as well. This motorcycle could really do it all. Some say, it even took many guys out of the friendzone… I don’t doubt it, as this would be the first and the last time an R15 would have a pillion seat conducive to long-term relationships. 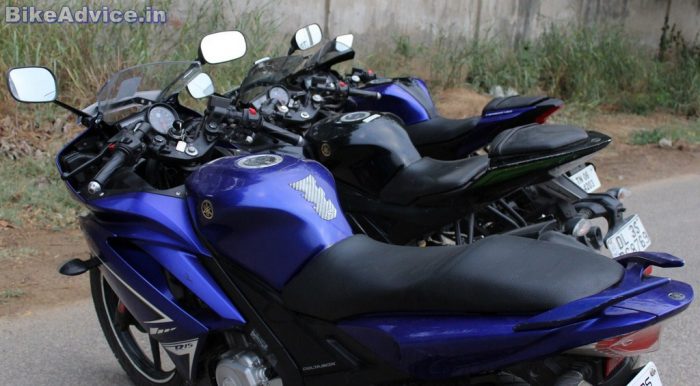 Okay, Yamaha thoughtfully did bring the R15S, but it came much later, and I don’t see that many on the road. Guess the guys have finally sorted their priorities… 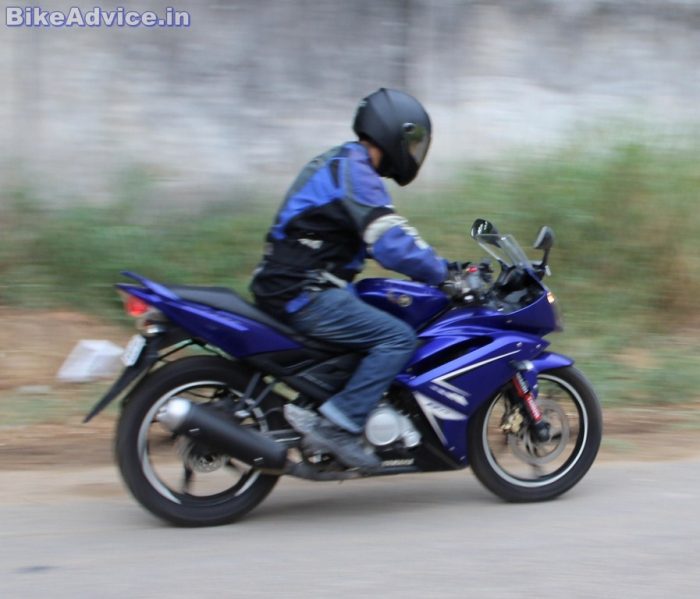 Coming back to the V1 now; all was really fine, but now the posers were increasingly being reminded by their gym friends (RE guys, mostly) of how the rear of the R15 appeared weak. Honestly, they weren’t wrong. Viewed head on, and also up to the tank when viewed in profile, it looked like a legitimate son of the mighty YZF-R1, but as soon as your eyes wandered further behind, that son suddenly looked like one who got abandoned in Somalia. 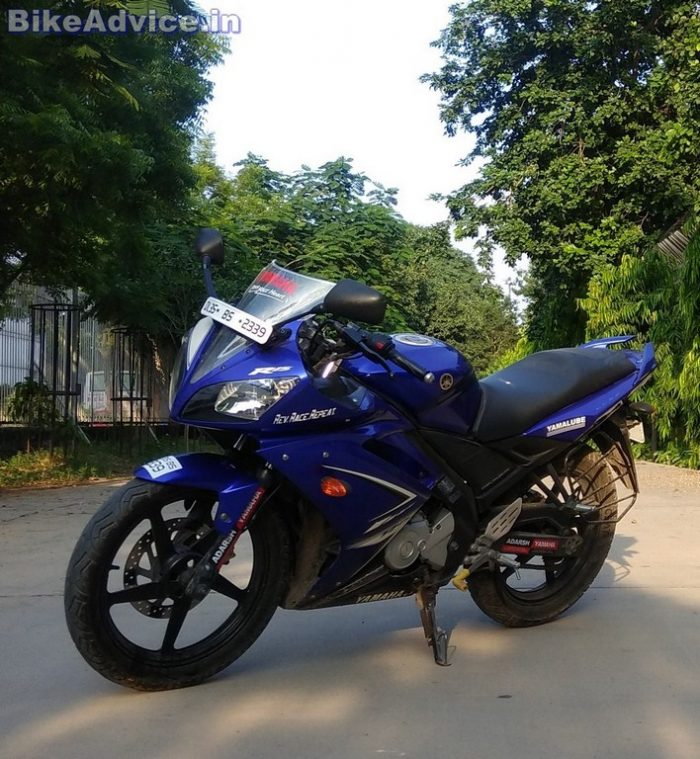 Yamaha India did not wait much this time around and launched the YZF-R15 Version 2.0 just before the festive season in 2011. Now THIS motorcycle was truly gorgeous – the R15 finally looked like a proper sportbike, and not like something that was cross-bred with a Hero Honda Glamour (which, by the way, beat the R15 in becoming the first fuel-injected motorcycle in India). 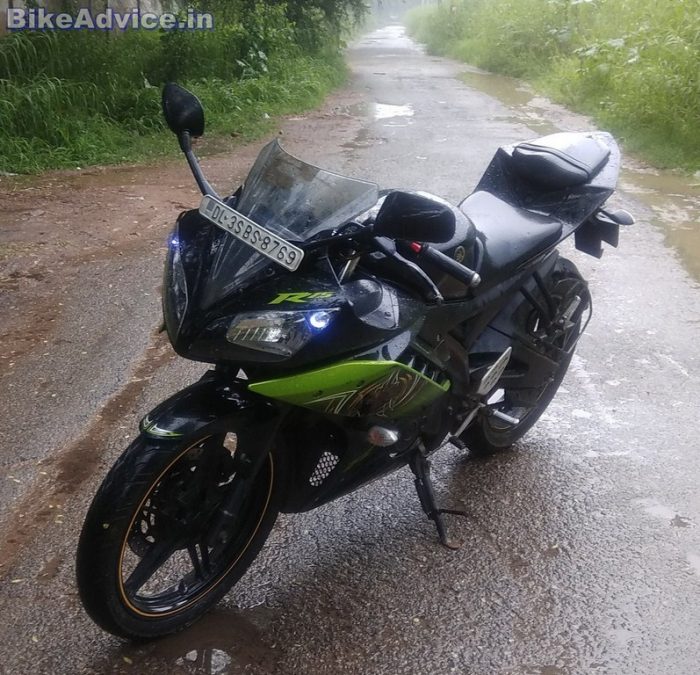 The beauty was again not just skin deep; the new bike saw a lot of changes other than its oft-talked about YZF-R6-like rear design. It got bigger sprockets (15/47 instead of 14/42), new dual-cable throttle, new throttle pulley, new clutch axle shaft, new swingarm that increased the wheelbase by 55 mm, new alloys, wider rubber, bigger rear rotor, new silencer, LED tail lamp, and five kilos in the process. 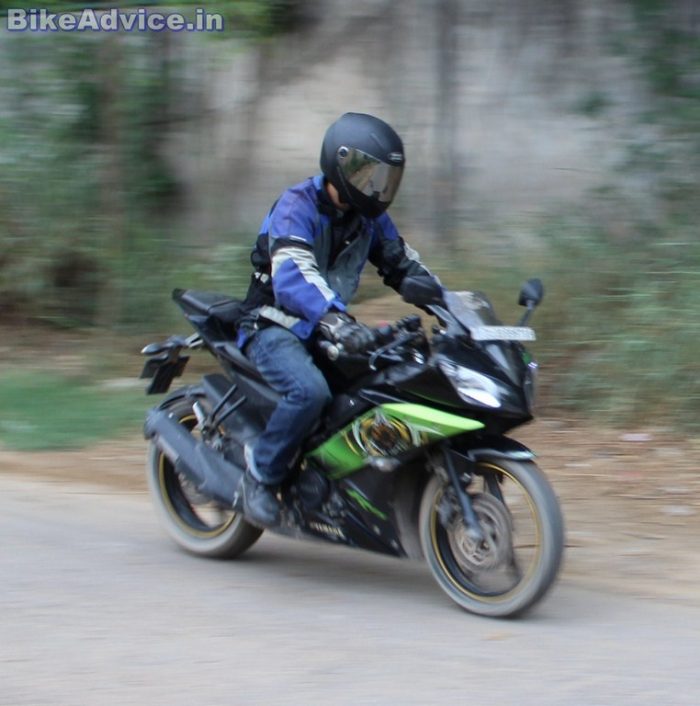 Despite the added weight and no increment in power or torque figures, the revised gearing, remapped ECU, and better aerodynamics (Yamaha claimed it to be four per cent better than the V1’s) ensured that the new R15 was quicker and faster than the outgoing model, thereby also stamping Yamaha’s claim that the new tyres offer less rolling resistance than earlier. 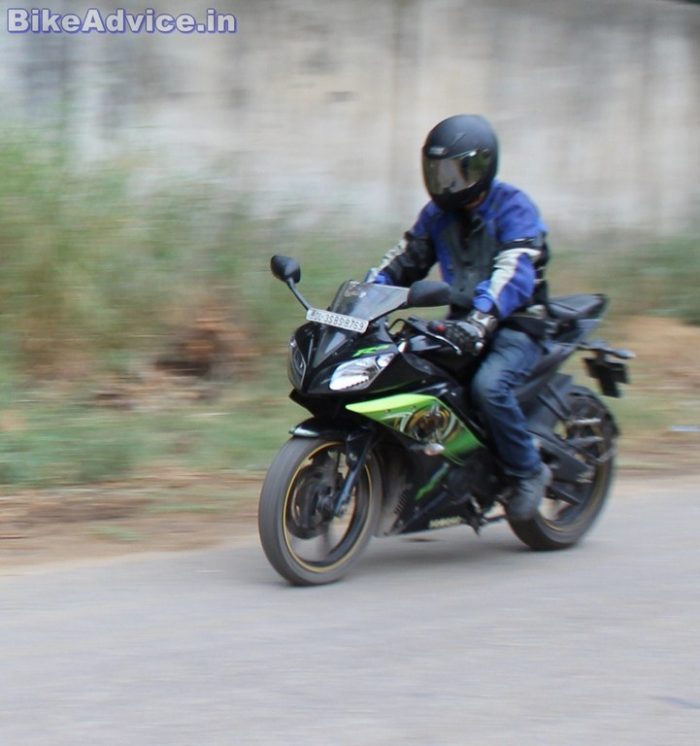 The R15 V2 also saw an increase in the seat height by 10 mm and, if you looked closely, the clip-ons were lowered as well. 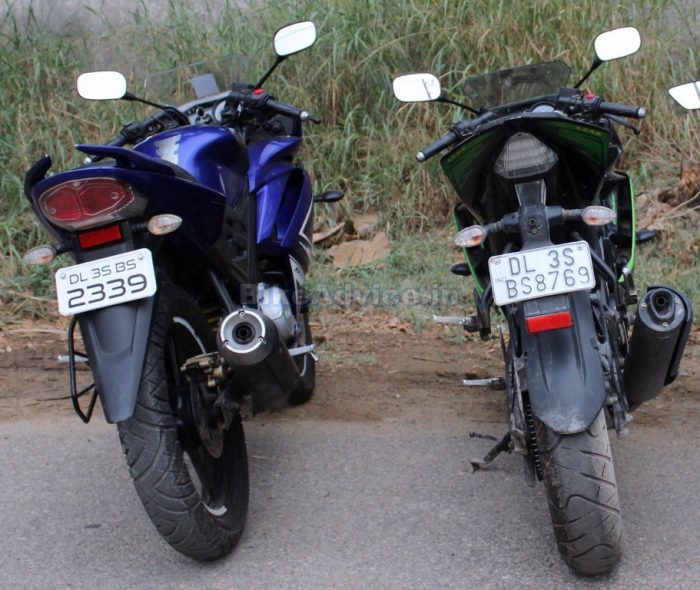 Yes, the R15 had become a more focused sportbike now. The racier riding posture meant that the rider’s weight was further biased towards the front, which aided in even better front tyre grip, telepathic control, and, thereby, providing more confidence to the rider under all conditions. The unchanged rake and trail figures meant that the bike retained its sublime flickability, while the increase in wheelbase and wider rubber meant that the new bike was not only more stable in a straight line, but more poised and fluid in corners too. 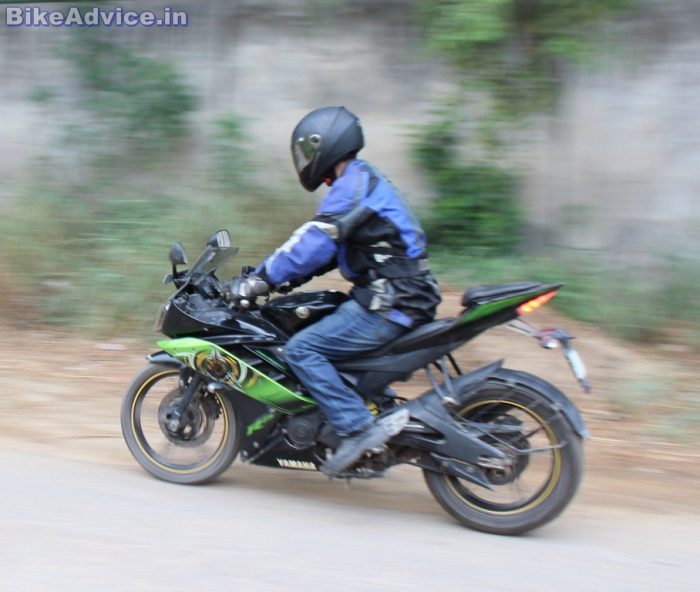 Some say that taking their helmet off, after a quick ride in the twisties, to check their reflection in the rear view mirror, they saw Rossi wink at them. They are adamant that they weren’t hallucinating… 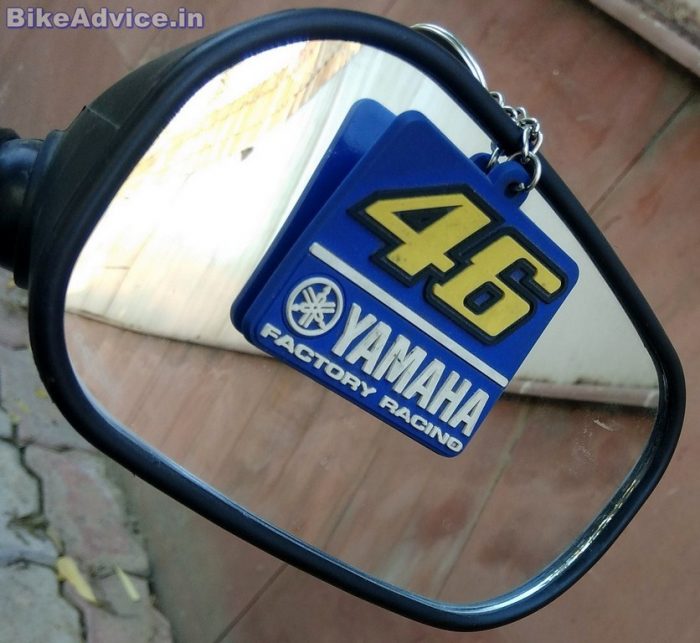 But they sure were when they thought their forever-single days were over upon buying an R15 V2. Because, the truth is, that though everyone loved the new R15’s looks, all of them hated to be a pillion on it. 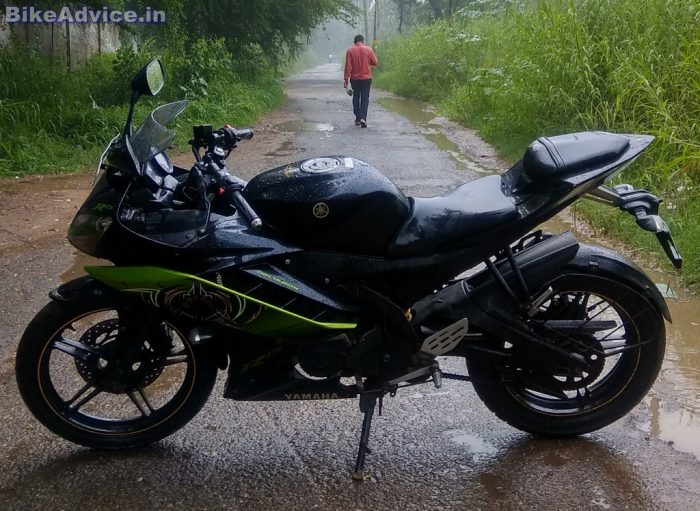 According to a scientific research in the USA (that’s where all the researches are conducted, right?), two was the maximum number of dates a guy could expect on the R15 V2. Anything more meant the girl really loved you. You should’ve married her. 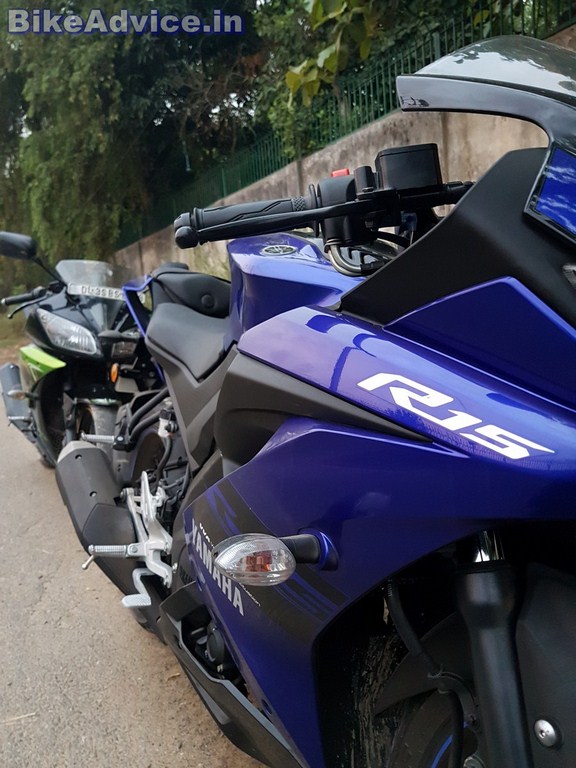 The materialistic ones didn’t go beyond one date though. They believed that if they had to be uncomfortable, they would rather sit on a KTM because it’s faster. It’s another matter altogether that the KTM date didn’t last any longer too, because the engine heat burnt their leggings. 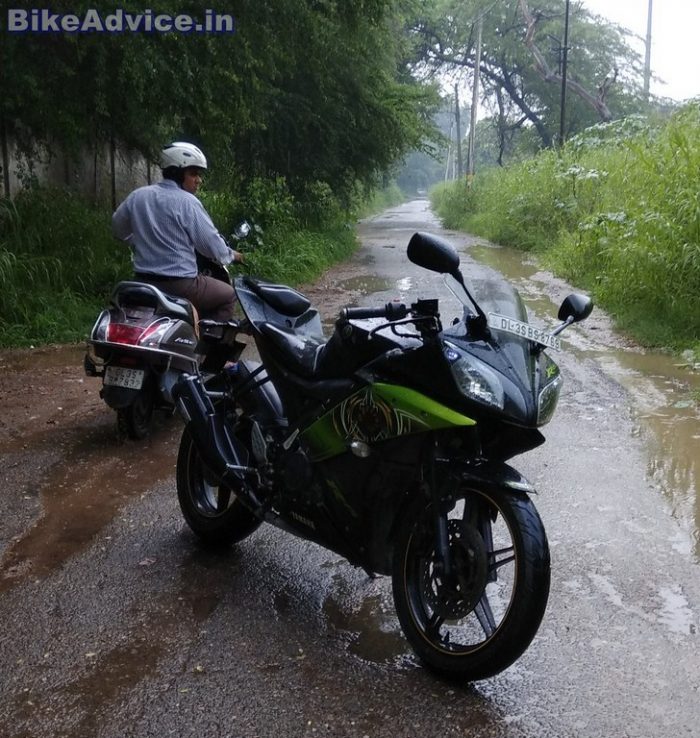 That further reiterates the fact that the R15 has always been in a class of its own. It didn’t really have any competition back then, and it doesn’t have any even now. The CBR 150 R was never a true competitor and, therefore, doesn’t exist anymore. The Aprilia RS 150 will be the first direct competitor to the R15, as and when it comes. No, the Pulsar RS 200 is not a competitor. It’s a value for money motorcycle, like all Bajaj bikes, but it’s a fat cow. An ugly fat cow.

I’ll tell you what a true competitor to the R15 would be like – a fully-faired 150-160 cc sportbike that handles as good as the R15 and can sustain speeds of over 130 km/h all day without blowing a gasket or spilling Hulk’s blood from the radiator. That would be a true challenger to the R15. For example, it’s the same situation with the Duke 390. It will remain the undisputed king till there’s another naked that handles as good as the KTM and puts out over 40 horsepower. Blowing a gasket and spilling Hulk’s blood will be allowed here.

Yamaha India are more than aware of it (the R15’s lack of competition), and that is why they know they’re sorted if they just keep on playing to their strengths, which comprise performance, handling, reliability, design, and quality. And that’s exactly what they did with the FZ25 and also with latest R15 – the YZF-R15 V3.0. 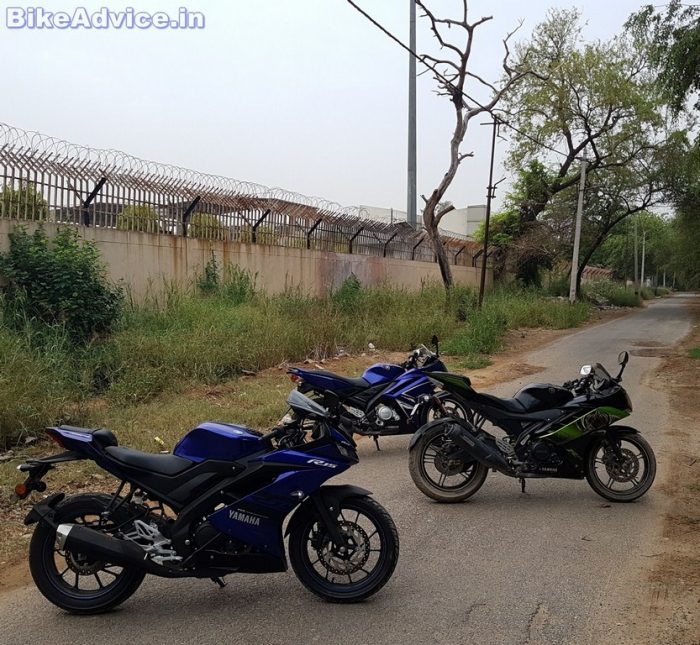 You may read about the FZ25 here, and while our first ride review of the R15 V3 can be read here, I’ll talk about the motorcycle a little before I ask you to wait for its road test review which would be published shortly as well. 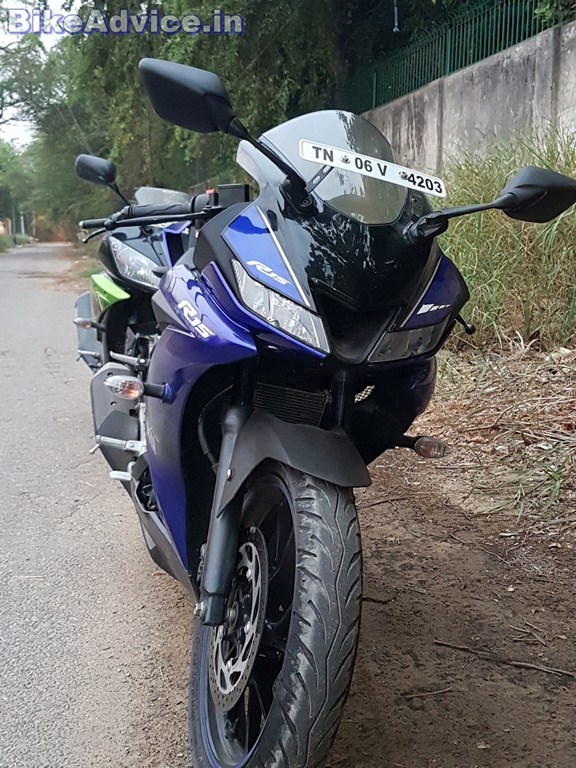 The R15 V1 was a revolution. I’ve already mentioned that earlier. The V2 was an evolution, and the V3 continues that trend of bettering the best. In fact, the R15 series constitutes the perfect embodiment of ‘continual improvement’, and of not resting on one’s laurels. 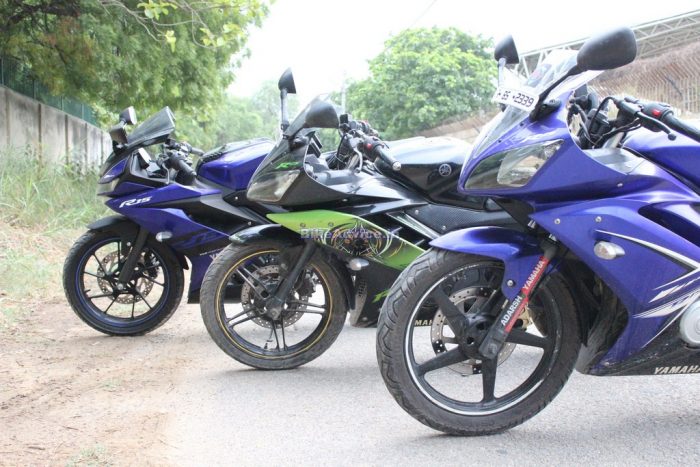 Therefore, it’s no surprise that the V3 is the best R15 yet; it’s the quickest and the fastest R15, and it’s the best handling R15 as well. Yes, it has become more extreme, and I want to give Yamaha a big high-five for that! At a time when Mercs are becoming stiffer and BMWs are becoming softer, I am glad that almost all motorcycle manufacturers are sticking to their roots and core values without being stuck in the Stone Age (REs being the only exception here). 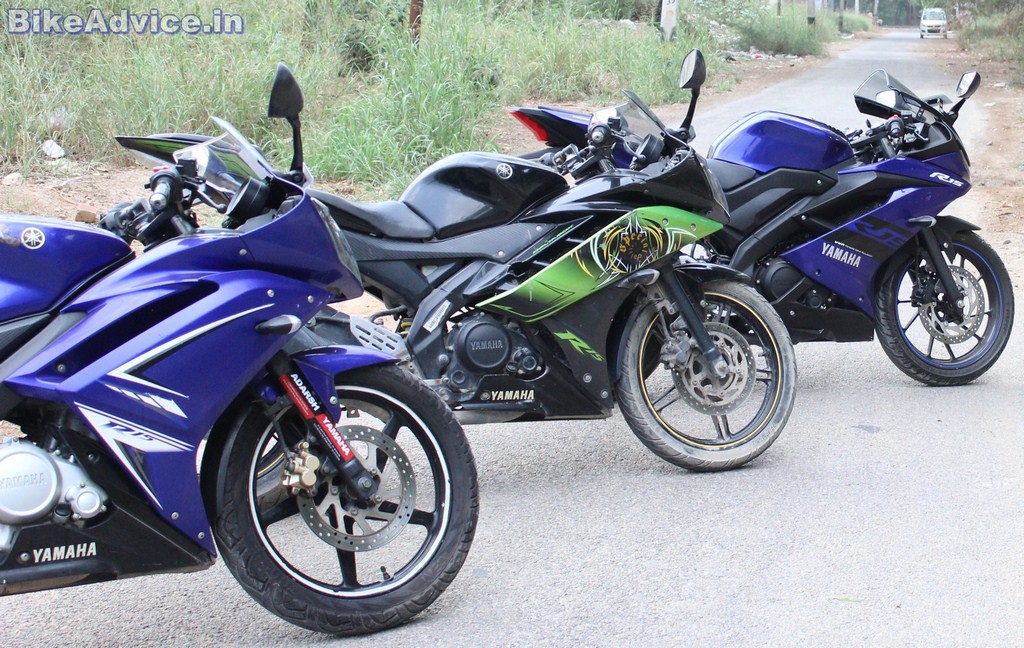 So you have the version 3 of a sportbike, which has ruled the roost in handling, not just in its segment or price range, but across the entire spectrum of motorcycles on sale at all times, and the manufacturer has still been able to make it better! It’s such an incredible feat that Yamaha should be giving royalty to the team in charge of the V3 project. I am not exaggerating; the motorcycle is that bloody good! 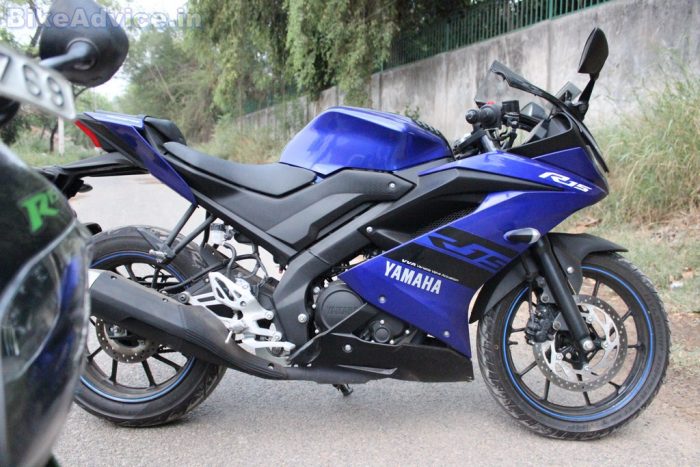 Ask any real motorcycle-enthusiast about how they feel about the most rounded motorcycles (like, say, the CBR 250 R, CBR 650 F, etc.), and they’ll be happy to recommend it to you. But ask them about the most focused motorcycles (YZF-R15, Daytona 675 R, YZF-R6, YZF-R1M, Duke 390, Duke 1290, etc.) on this planet, and see their faces light up brighter than the brightest TFT displays of them all! That’s the beauty of such motorcycles; they excite you, and then calm you; they keep you on the edge for a while, and help you keep sane at all other times, but most importantly – they don’t let that emotion inside you die, ever. The YZF-R15 is one such motorcycle.