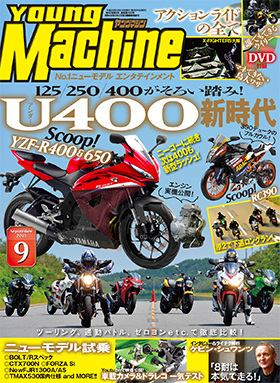 If a Japanese tabloid “Young Machine” is to be believed, Yamaha is working on a 400cc bike and another 650cc as well. They could be pitted against Japanese counterparts’ machines in the same segment, say for example the Honda CBR400R/500R.

This thought is supported by the fact that Yamaha recently showcased a few journalists its new twin-cylinder engine, supposed to be in the Goldilocks Zone for powering the above speculated bikes. A blueprint for a 650 cc mill could be prepared, and then it could be smothered down to 400cc, exactly similar to what Kawasaki has done with its ER-6. Yamaha, however, refused to comment on the possible capacity or output of the displayed engine.

Yamaha currently has a noticeable disparity in its portfolio in between the entry-level YZF-R125 and the middle-weight YZF-R6. It seems like the Japanese giant’s executives are toiling to shore up the company’s presence, amidst a growing accusatory cry of stagnation.

In India, Yamaha’s subsidiary has been in a Deep-Sleep mode since long, waking up from time to time for releasing “Repaints and Retouches”. It was earlier heard that a 250cc bike would arrive from Yamaha’s Indonesian stable, but that scheme is still hazy and nothing concrete has evolved yet.

The news of a Tuning Fork branded 400 cc bike along with that of a punchier 650 cc machine is definitely good to hear. But does it fall into the Indian puzzle? Wouldn’t you like to hear about a 250 cc bike??